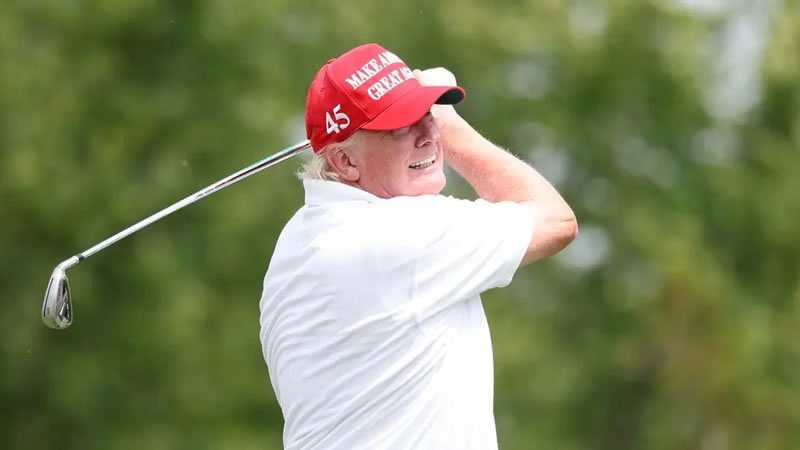 Golf-loving Despite missing the opening day of the weekend-long event, former US President Donald Trump has won another competitive tournament at one of his Florida clubs.

On his social media channel Truth Social, he proclaimed his victory in the Senior Club Championship at Trump International Golf Club in Palm Beach, Florida.

Mr. Trump declared that it was “a great honor” to have won the tournament “[at] one of the best courses in the country”. “Competed against many fine golfers and was hitting the ball long and straight.

The reason that I announce this on fabulous TRUTH is that, in a very real way, it serves as a physical exam, only MUCH tougher.”

That appeared to be a reference to the controversies involving Mr. Trump’s annual physicals throughout his administration, including one in 2019 that revealed he was officially obese.

Mr. Trump’s remark, however, may have surprised some who have been following his activities this weekend, since a video showing him delivering a eulogy at the funeral of North Carolina YouTuber Diamond on Saturday surfaced online.

Diamond was one half of the conservative vlogging and social media celebrity couple Diamond and Silk. Her funeral took held on Saturday, the opening day of the Senior Club Championship, which was taking place more than 700 miles away.

Trump campaign spokesperson Steven Cheung, quoted by the Daily Beast, confirmed the former president was present at the funeral on Saturday.

“In addition to being an excellent golfer, President Trump is an even better human being. He was honored to be in North Carolina on Saturday to celebrate the life of Diamond, a remarkable individual whose legacy will continue to live on,” Mr. Cheung said.

According to club sources reported by the Daily Mail, participants were shocked to see Mr. Trump’s name at the top of the leaderboard on Sunday, five points ahead of Saturday’s best performer.

According to the Mail, Mr. Trump told organizers that he played a solid round on Thursday and that it would count as his first day’s score.

It is not the first time that Mr. Trump has been accused of exaggerating his accomplishments on the golf course. In his book “Commander in Cheat: How Golf Explains Trump”, author Rick Reilly writes that: “To say ‘Donald Trump cheats’ is like saying ‘Michael Phelps swims’.”

Reilly writes in the 2019 book that Mr. Trump “cheats at the highest level. He cheats when people are watching and he cheats when they aren’t. He cheats whether you like it or not. He cheats because that’s how he plays golf … if you’re playing golf with him, he’s going to cheat.”

The blurb of the book says that it is based on Reilly’s own experiences with the former president “as well as interviews with over 100 golf pros, amateurs, developers, and caddies”.

In September last year, Mr. Trump shared a link to a DC Enquirer article about a Golf Digest ranking, titled “Donald Trump Is Ranked Number 1 Presidential Golfer in History by a Landslide”.

The single-term president topped a list of golfing US presidents that included his successor Joe Biden, who had a handicap of 6.7 compared to Mr. Trump’s 2.8.

Other players and sportswriters slammed the Golf Digest rating as “phonier than Velveeta [cheese] on spam,” as sportswriter Reilly put it.

The magazine was trolled later for the rankings. “You’ve got a rogue decimal point in Orange Man’s handicap,” wrote golfer Tony Johnstone.

Families of 9/11 victims also chastised Mr. Trump for hosting a Saudi-funded golf event 50 miles from Ground Zero. The 9/11 Justice Committee accused Mr. Trump of accepting hundreds of millions of dollars from a “evil regime” in return for hosting the breakaway LIV Golf tournament at his Trump National Golf Club in Bedminster, New Jersey.

Woods serves up laugh ahead of Masters Champions Dinner