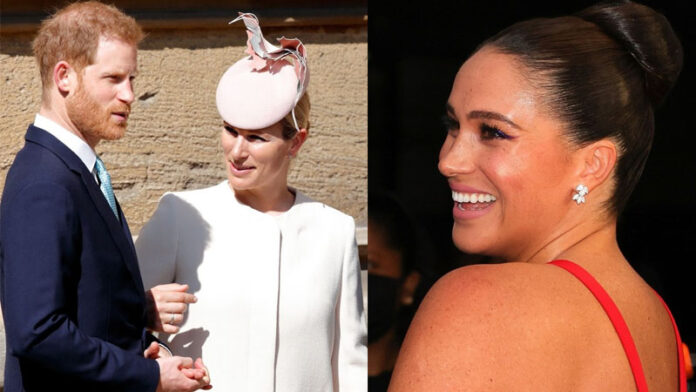 As the royals lurch from one controversy to the next, one member of the family has managed to keep out of the spotlight while maintaining strong relations with everyone: Zara Tindall, the Queen’s first grandchild.

Zara, 40, has inherited her mother’s businesslike approach and dedicated work ethic, but she, too, has had enough of Prince Harry and his wife, Meghan, Duchess of Sussex.

After the Sussexes’ recent string of controversial decisions, including Meghan saying she’ll debut her Spotify podcast series in June, which will vie for column inches with the Queen’s jubilee, New Idea understands fed-up Zara wants to have a “firm word” with her younger cousin.

Meanwhile, Harry, 37, has filed a new lawsuit against the Mail on Sunday, alleging that the tabloid “injured his feelings” by reporting that he never legally committed to pay for his family’s security when they return to the UK from California.

As per NewIdea, he alleges he did so at a meeting in Sandringham in January 2020, which was also attended by the monarch, Prince Charles, and Prince William, prompting some insiders to speculate that lawyers would try to call them as evidence.

“This was the final straw for Zara, who is incredibly close with her grandmother and can’t stand seeing Harry and Meghan playing games during the twilight of her life,” says a source.

“She’s tried to sit back quietly and not take sides as the rest of her cousins have battled it out, but one thing she won’t hear of is having her grandmother’s platinum jubilee celebrations overshadowed by a podcast from California.

“She wants to tell Harry to pull his head in and stop Meghan from doing something so blatantly conniving.”

The source further states, “Harry and Meghan have had this Spotify podcast deal up their sleeves, sitting dormant, for almost two years. So why choose the same month as the Queen’s jubilee celebrations to release it? It doesn’t sit right with Zara at all.”

Zara’s intervention, according to a palace insider, reflects her mother Princess Anne‘s protectiveness of the Queen.

“The rest of the family is very relieved that Zara is finally preparing to step in because everyone knows Harry will listen to her,” says the source. “She very much takes after her mum and won’t tolerate nonsense, and the thought of anyone ruining what is likely to be the Queen’s last hurrah is unacceptable to Zara.”

Miles Jackson, a Black man died after being shot 20 times in the emergency room by Ohio police officers