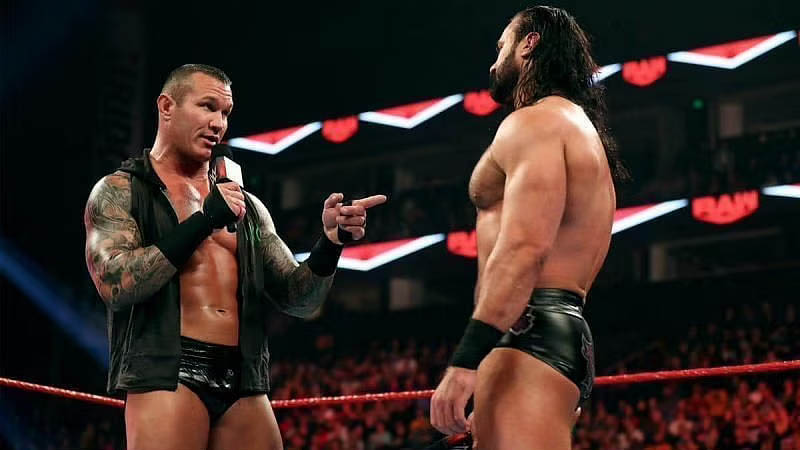 Randy Orton will have to defend his title against Drew McIntyre next week as Survivor Series looms ahead.

As Survivor Series draws closer, WWE Raw has become home to chaos on a weekly basis. This week’s edition of WWE’s flagship program was no different, with Randy Orton backed into a corner in addition to both the men’s and women’s Survivor Series teams battling internal conflict.

The biggest news coming out of Raw is that a pair of title matches have been set for next Monday, both with the ability to cause a huge shift in the Survivor Series card. Randy Orton will face Drew McIntyre once again, this time as WWE champion after having won the belt from McIntyre at Hell in a Cell. Also, The New Day will defend the Raw tag titles against The Hurt Business.

CBS Sports was with you all night on Monday bringing you all the results, highlights and grades from this week’s edition of WWE Raw.

The Miz opened the show hosting “Miz TV” with John Morrison, saying that they would be tagging with Randy Orton later in the night against The New Day and Drew McIntyre. This brought Orton out to claim Miz was setting up a situation where he’d try to cash in the Money in the Bank contract after the match, but Miz and Morrison said they simply wanted to win because it may put them in line to face New Day for the Raw tag titles. This, in turn, brought out New Day before Orton hit Kofi Kingston with an RKO, leading to McIntyre running to the ring to attack Orton. Miz hit McIntyre from behind with the briefcase, allowing Orton to hit another RKO to end the segment.

Drew McIntyre & The New Day def. Randy Orton, The Miz & John Morrison via pinfall after McIntyre hit Morrison with a Claymore. Before the match, Adam Pearce informed Orton that he had to defend the title against McIntyre next week on Raw. Throughout the match, Orton did his best to avoid getting into the ring, refusing to tag in repeatedly in an attempt to not only stay away from McIntyre but also not take damage that could set him up for a Miz cash-in. After McIntyre had Morrison down and out, he begged Randy to tag in and give a preview of next week’s title match. Instead, Orton grabbed his belt and left. Moments later, McIntyre hit Morrison with a Claymore for the win.

Again, the volume of challengers gunning for Orton’s title has been a great part of Raw in recent weeks. It has added a much-needed unpredictability to the top of the card. This is clear when talking about next week’s title match between Orton and McIntyre. Either man winning the match and heading into Survivor Series to face Roman Reigns makes sense, as does a Miz cash-in post-match. Nothing terribly great happened in the program tonight, but compelling storylines mean the show doesn’t hinge on every week having massive developments. Grade: B
https://twitter.com/WWEUniverse/status/1326011916540653570

Survivor Series Qualifying Match — Riddle def. Elias and Jeff Hardy via pinfall after hitting Bro Derek on Elias. The match was a bit of a mess, not really living up to a quality you’d expect from the participants. In the end, Riddle was able to score the win to become the final member of the Raw men’s Survivor Series team. Backstage, Sheamus took issue with Riddle making the team, telling AJ Styles that he had no problem kicking Riddle’s head off his shoulders. Sheamus was then asked how Styles was doing as captain, only to have Sheamus — and then Braun Strowman — declare, “AJ is not my captain.”

Riddle & Keith Lee def. Sheamus & Braun Strowman (with special guest referee AJ Styles) via pinfall when Riddle rolled up Sheamus. Styles called the team out to the ring later in the show in an attempt to bring them together, saying things went poorly last week because they were missing the final piece of the puzzle. That, Styles said, was no longer the case now that they have added Riddle. Things quickly broke down into arguments between the various members of the team. Riddle tried to settle things down by giving the team “sick code names.” Styles tried to give a motivational speech about each member wanting not to be embarrassed by SmackDown, but it fell apart when he again called himself team captain, so Styles made a match for later in the night: Sheamus & Braun Strowman vs. Keith Lee & Riddle with himself as guest referee. This led to a wild match that saw Styles repeatedly hit by accident before eventually counting the fall after Riddle rolled up Sheamus following an angry Sheamus kicking his own partner.

Whether WWE saw it best to write it this way or if it is because of the pandemic, Survivor Series not hinging on endless cross-brand invasions has been refreshing. Everyone is playing a role here on a team that is not a group of friends but a group of men with big egos and their own personal drives. Styles is trying to steer a broken ship, and he is wonderful in the role. Invasions can be fun, but inter-team strife, when done well, is better. Grade: B+

What else happened on WWE Raw?

24/7 Championship — R-Truth def. Drew Gulak (c) to win the title. Gulak pitched himself as a new member of The Hurt Business. After asking Gulak if he was serious, MVP said they weren’t accepting new members and the group beat him up, leaving him lying. That allowed Truth to run in and score the pin.
Shayna Baszler def. Lana via submission with the Kirifuda Clutch. It was light work for Baszler, but as she threw Lana to Nia Jax on the outside for the weekly spot where Jax Samoan Drops Lana through the announce table, she was stopped by Dana Brooke and Mandy Rose as the issues between the members of the Raw women’s Survivor Series team continue. Lana thanked the duo backstage later in the show, but they quickly blew her off.

Nikki Cross confronted Alexa Bliss backstage and told Bliss to choose either her or The Fiend. Bliss giggled before quickly saying she would choose “him.”
United States Championship — Bobby Lashley (c) def. Titus O’Neil via submission with the Hurt Lock to retain the title. The match came when O’Neil threw down a challenge as Lashley and MVP were in the ring running down Sami Zayn ahead of Survivor Series. O’Neil threw a flurry of punches but was quickly locked up and submitted.

Asuka (c) def. Nia Jax via disqualification in a non-title match after interference by Shayna Baszler. Jax wanted the match to try to show why she should be Raw’s team captain at Survivor Series. Asuka got off to a fast start, but Jax was able to turn the tide. The rest of Team Raw got involved on the apron, fighting among themselves. The distraction led to Asuka locking in the Asuka Lock, but Baszler ran into the ring and kicked Asuka for the disqualification. Jax and Baszler then attacked Brooke and Rose before turning their attention to Lana. This, of course, led to Jax hitting a Samoan Drop through the announce table before telling Lana that she doesn’t belong on the team and to just quit.
Angel Garza cut a backstage promo stating that he fights to show all women they deserve better than the rest of the men in the world.

24/7 Championship — R-Truth def. Akira Tozawa to win the title. This began as a seven-way match. There were nine title changes in the segment before R-Truth managed to escape with the belt. Order of pinfalls: Akira Tozawa def. Truth, Erik def. Tozawa, Drew Gulak def. Erik, Tucker def. Gulak, Gulak def. Tucker, Tucker def. Gulak, Metalik def. Tucker, Dorado def. Metalik, Truth def. Dorado.
Mustafa Ali def. Ricochet via submission with a Koji Clutch. This was a tremendous showing for both men featuring some really incredible moves. Ricochet seemingly had the match won, but chose to hit a dive on Retribution at ringside to keep them from running in which allowed Ali to recover and lock in the submission.