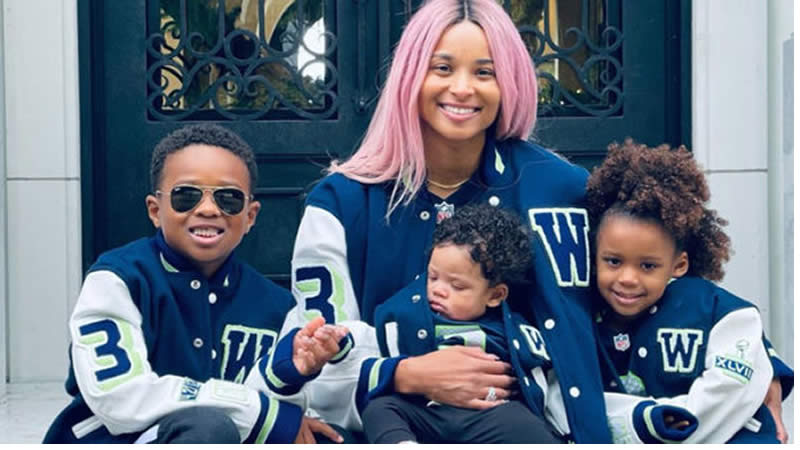 The former Seattle Seahawks quarterback recently revealed he sees himself playing many more years in the NFL
Broncos, let’s go!

With their wife Ciara and their children by his side, Russell Wilson was presented as the new quarterback of the Denver Broncos on Wednesday.

“My goal is to play 10 or 12 more years and hopefully win three, four more Super Bowls, that’s the plan,” Wilson, 33, told reporters at a press conference at the team’s training center in Englewood, Colorado, per ESPN.

“That’s the mindset. That’s why I came here, to finish my career here and hopefully finish on top as a champion. And do it multiple times.”

With Ciara, 36, and their three children – son Win Harrison, 19 months, daughter Sienna Princess, 4, and son Future Zahir, 7, whom the Grammy winner shares with ex Future – the NFL star was pictured proudly holding up his new orange jersey (retaining no. 3, which he wore for 10 seasons on the Seattle Seahawks).

Wilson’s mother, Tammy, and older brother, Harrison, were also there to cheer him on.

To finalize the transaction, the Bart Starr Award winner waived his no-trade clause, which ESPN called “one of the biggest trades in league history.”

The Broncos traded Wilson and a fourth-round pick for current quarterback Drew Lock, tight end Noah Fant, defensive end Shelby Harris, and five other players. With the start of the NFL’s new league year on Wednesday, the transaction became official.

Wilson said he “didn’t initiate” the transfer from the only professional franchise he’s ever known, though sentiments were “definitely mutual” — and that there were no hard feelings, according to the Associated Press.

“Hard feelings? No. I had 10 incredible years there,” Wilson said. “And what I do know is that some of the greatest quarterbacks of all time, from [Peyton] Manning to Tom Brady, Drew Brees, have gone from one place to another, guys I’ve always known and admired. So, at this moment, I’m looking forward to the opportunity to continue to grow and learn.”

Wilson was drafted in the third round of the 2012 NFL Draft by the Seahawks. He won one Super Bowl with the team and was just named to his ninth Pro Bowl.

During an interview on Jimmy Kimmel Live! earlier this month, the quarterback stated that he sees himself in the league for many more years.

“It’s a process. It’s a lifestyle. I think that when you’re trying to play as long as I’m trying to play — I’m trying to play to 45, 12 more years — for me, the mentality, the focus level, everything that you have to do has to be surrounded on that,” Wilson explained. “It’s been an amazing journey for me so far.”

Cop kneels on a US student’s neck sparks anger