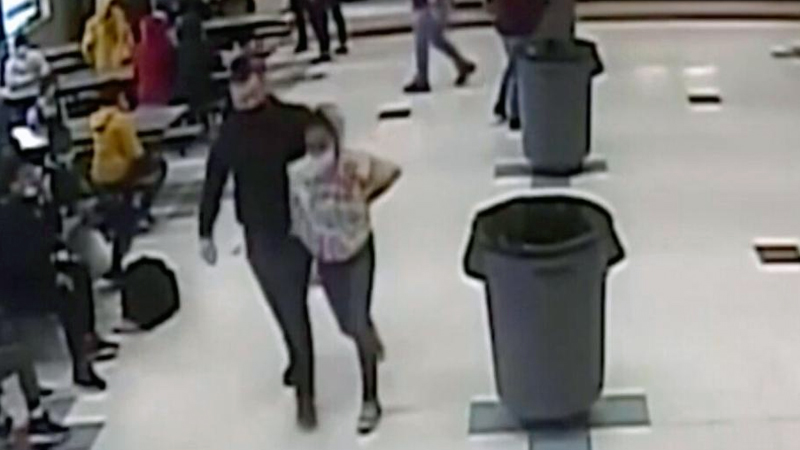 Parents of girl are calling for charges after a video shows an off-duty police officer putting his knee on their daughter’s neck after breaking up a cafeteria fight.

In Kenosha, Wisconsin, school officials released security footage showing an off-duty cop putting his knee on a 12-year-old girl’s neck to restrain her during a lunchtime flight.

On Friday, the Kenosha Unified School District released a censored video of the March 4 brawl. Officer Shawn Guetschow of Kenosha is seen intervening in the fight and scuffling with the girl before falling and hitting his head on a table.

Guetschow, who worked as a security guard at the school, then slams the girl’s head into the ground and applies pressure on her neck with his knee for almost a minute before handcuffing her and taking her out of the cafeteria.

Guetschow’s use of a kind of restraint that was banned for Wisconsin law enforcement personnel last year has led the girl’s father, Jerrel Perez, to call for criminal charges against him. For her injuries, he said his daughter is in therapy and visiting a neurologist.

Guetschow was initially placed on paid leave by the school system. According to Newsweek, he resigned from his part-time security job at the school on Tuesday.

Guetschow claimed in his resignation letter that the school system had failed to support him and that the incident had put a huge strain on his family.

The district declined to provide any additional information to the newspaper and did not answer messages left by The Associated Press on Saturday.

Guetschow is still employed by Kenosha police, according to a statement.

“We continue our investigation, paying careful attention to the entire scope of the incident,” the statement said. “We have no further update at this time.”

Donald Trump’s Troubles Could Still Backfire on His Critics, While Joe Biden Briefly Breaks Through