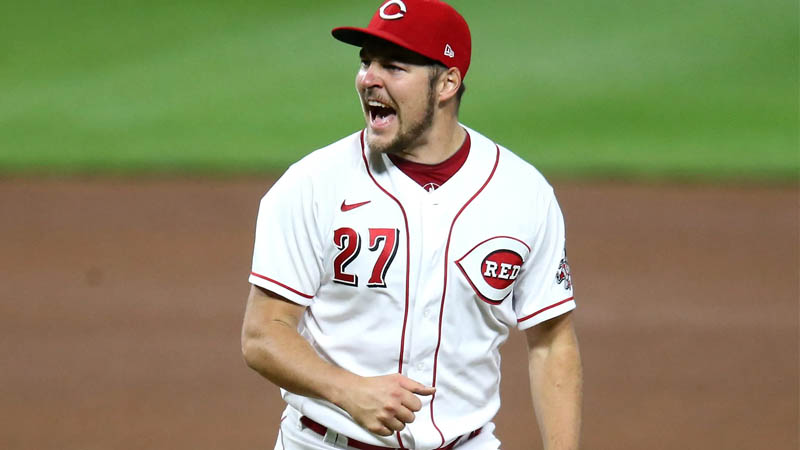 They all had excellent seasons throughout their careers, but none of them achieved what Trevor Bauer did on Wednesday. Bauer was named the 2020 National League Cy Young Award winner, the first pitcher in Reds history to earn the prestigious award.

The Reds were one of four clubs without a Cy Young winner since the award was introduced in 1956. The other three teams, the Colorado Rockies, Miami Marlins and Texas Rangers, have a much shorter history as newer additions to the league.

Bauer received 27 of the 30 first-place votes, winning in a landslide over finalists Yu Darvish (Chicago Cubs) and Jacob deGrom (New York Mets) to earn the award for the first time in his career. Bauer placed sixth in 2018 in the American League voting.

Cueto was second in the Cy Young voting in 2014 behind unanimous winner Clayton Kershaw. Soto was the last Reds pitcher to receive at least one first-place vote when he was runner-up to Philadelphia’s John Denny in 1983.

Winning a Cy Young was Bauer’s top goal when he was drafted with the No. 3 pick by the Arizona Diamondbacks in the 2011 MLB Draft. He’s known for being one of the most outspoken players in the sport, and his unique training methods became more accepted in recent years.

“Just having a year like this, it really validates all the work,” Bauer said at the end of the season. “People way overestimate what can be done in one year, but they underestimate what can be done in 10. I’ve been at this for 10 years, probably more like 15 years now actually in this method of development, but hopefully it validates what I do, the scientific approach to baseball for the people that follow me.”

Bauer frequently trains in the offseason at the data-driven Driveline facility near Seattle, along with some other data-heavy facilities. Bauer was one of the first pitchers in professional baseball to work with weighted balls. He was the first to utilize the extreme slow-motion cameras during bullpen sessions that are now ubiquitous with all teams.

He was an unconventional pitcher, but he was ahead of the curve in many aspects. His Reds teammates frequently leaned on him for advice.

In a shortened season when every game carried more weight, Bauer was remarkably consistent. He yielded zero or one earned runs in eight of his 11 outings. He pitched two complete-game shutouts as a part of seven-inning doubleheaders. He allowed 14 earned runs and nine homers, showing there was few ways to score a run against him.

The start that will always be remembered was a must-win game against the Milwaukee Brewers on Sept. 23. Bauer, pitching on short rest, gave up one run and four hits in eight innings while striking out 12. After two hitters reached base in the sixth inning, Bauer struck out the next three batters and let out a progressively louder yell after each one. The Reds clinched a playoff spot when they won their next game.

“The higher you raise the stakes for that guy, the better he pitches. You can’t say that about a lot of guys in this league,” Reds catcher Curt Casali said. “The dude eats, breathes and sleeps baseball. Personally, I can’t do that. But he does and there is a reason why he’s doing what he’s doing. It’s because he devotes his entire life to it.”

Bauer had a lot of viral moments throughout the 2020 season. His creative cleats were a must-see in each of his starts, whether it was poking fun at the Houston Astros with trash cans or a tribute to Harambe. After pitching a complete game in a doubleheader in Kansas City, he revealed a “Send It!” shirt that depicted him throwing a ball over the center-field wall from one of his infamous moments last year.

Bauer, now a free agent, is the first Cy Young winner to reach the free-agent market in the same year since Greg Maddux in 1992. Maddux, coincidentally, announced Bauer as the Cy Young winner Wednesday. Bauer should draw widespread interest around the league because he will consider signing a short-term contract.

He rejected the Reds’ one-year, $19.8 million qualifying offer, as expected, which means the Reds will receive draft pick compensation if he signs with another team. The Reds haven’t ruled out trying to re-sign him, but they’ve rarely been a team that has pursued the top tier of free agents.

During the final weeks of the regular season, Bauer closely followed his competitors in the Cy Young race. It was something that motivated him. He felt like he was the favorite to win in 2018 before he missed five weeks with a stress fracture.

And he knew he had an opportunity to make Reds history by winning the award.

“It’s one of those things in baseball. It’s like when the Cubs go 108 years without a winning a championship. You’re like, wow, that organization’s been around forever and how’s that even possible?” Bauer said in September. “It’s one of those things in baseball, one of the things that makes the sport great, I think. There is so much of a history there and so many really odd facts. I would love to be the person to break that.”

A couple of months later and Bauer did just that.