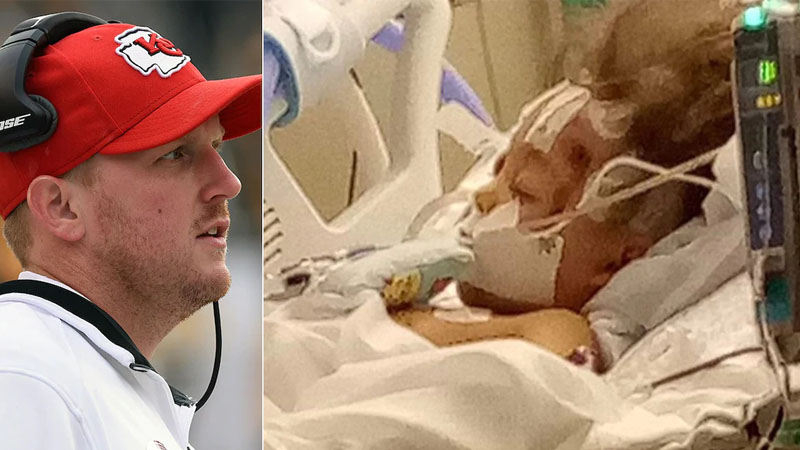 Days before the Super Bowl, Kansas City Chiefs assistant Britt Reid —son of head coach Andy Reid—was involved in a frightening car accident, that hospitalized two young children. This morning, we got an update on the status of five-year old Ariel Young, who was in a coma for almost two weeks after the accident.

A member of Young’s family had run out of gas, and pulled over on the entrance ramp of a local highway, near the Chiefs practice facility. Ariel Young was riding with her mother, aunt, and four-year old cousin, when they pulled over to assist their family member in the other vehicle.

Reid, who admitted to having “two or three drinks” and his prescription Adderall before the accident, hit both vehicles as he turned onto the entrance ramp moving at “highway speeds.” The incident occured on Feb. 4, just three days before the Chiefs played in the Super Bowl.

.@ABC EXCLUSIVE: Lawyer for family of girl injured in pre-Super Bowl crash speaks out: “She likely has permanent brain damage that she will endure for the rest of her life. She’s not walking.” @tjholmes reports. https://t.co/1Q9cFtKE9k pic.twitter.com/h9ALdKn3qG

“She’s awake, which is a huge development,” family attorney Tom Porto told Good Morning America on Tuesday. “Likely she has permanent brain damage, that she will endure for the rest of her life. She’s not walking. It’s a sad, sad story.”
The GMA story features images of all three cars involved in the accident. The second row of the Young family car, where Ariel and her cousin were seated, was “flattened,” according to the report.

Britt Reid was placed on administrative leave after the incident. The Chiefs did not renew his contract to return to the team for the 2021 season, once it expired.

“We don’t at all feel like this has been swept under the rug. It’s definitely on the forefront of the franchise’s mind,” Porto said of the Kansas City Chiefs. “That means a lot, and we hope that it stays there until we can reach some sort of resolution of this matter.”