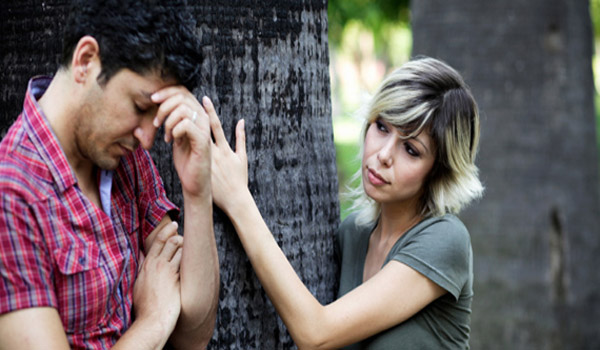 Imagine meeting with an engaged couple a few weeks before they are married. With excitement they describe how they met and how their relationship developed. The husband-to-be proudly describes how he set up a perfect romantic evening so he could pop the big question. Then they surprise you by saying, “We want to get married and have some children. At first we will feel a lot of love for each other.

Then we’ll start arguing and hating each other. In a few years, we’ll get a divorce.” Who would enter marriage intending to get a divorce? And yet, divorce is occurring at alarming rates. A large number of people in my church have been hurt deeply by divorce—they’ve been divorced themselves, or they’ve felt the pain of a parent or relative divorcing. As common as divorce is, I’m convinced that most of them could be avoided. Mark this down on the tablet of your heart: Every wrong behavior begins with believing a lie. Our culture promotes many deceptions that can quickly destroy a marriage. Here are eight:

1: My happiness is the most important thing about my marriage.”

As a pastor, I can’t tell you how many people have justified breaking up their marriages by saying, “I have to do this. God just wants me to be happy.” But according to God’s Word, a spouse’s individual happiness is not the purpose for marriage. The Bible says in Colossians 3:17: “Whatever you do in word or deed,” do for the glory of God. While all parts of creation are to glorify God, mankind was made in God’s very image. Through marriage, husbands and wives are to reflect His character and have children who will reflect His character … all the way to the end of time. Every marriage knows unhappiness. Every marriage knows conflict. Every marriage knows difficulty. But everyone can be joyful in their marriage by focusing on God’s purposes and His glory instead of individual happiness.

It’s a tragedy to lose love in marriage. But the loss of human love can teach us to access a deeper love—the very love of God Himself. That love is patient and kind … it never fails (1 Corinthians 13). It even cares for its enemies. When human love dies in a marriage, a couple can enter into one of the most exciting adventures they’ll ever have: learning how to love each other with God’s love. Romans 5:5 tells us that this very love “has been poured out within our hearts, through the Holy Spirit.”

3: “My private immorality does not affect my marriage.”

A lot of people think, I can view pornography in the privacy of my home. It’s just me and my magazine, or computer … it doesn’t affect my marriage.  Oneness in marriage is hijacked by sexual immorality. Paul says in 1 Corinthians 6:15, “Do you not know that your bodies are members of Christ? Shall I then take away the members of Christ and make them members of a prostitute?” In the 21st century, there are many ways to join oneself with a prostitute: physically, through the pages of a magazine, on a computer’s video screen, etc. Paul’s advice is the same today as it was thousands of years ago: Flee immorality (1 Corinthians 6:18).   If you take your emotional and sexual energy and spend it on someone else, there will be nothing left for your spouse. Those who continually view pornography or engage in sexual fantasies are isolating themselves.

The truth is God can fix our failures—any failure. The Bible says to forgive one another, just as God in Christ has forgiven us (Colossians. 3:13). “But,” you ask, “Doesn’t Matthew 19:9 say that God allows divorce in the case of sexual immorality?” Yes. I believe that it does—when there is an extended period of unrepentance. Yet, nowhere in that passage does God demand divorce. When there is sexual sin, we should seek to redeem the marriage and so illustrate the unfathomable forgiveness of God. Some of the greatest life messages I know are the marriages of people who have repented from sexual sin and spouses who have forgiven them. Their lives today are living testimonies to the truth found in Joel 2:25: “… I will make up to you for the years that the swarming locust has eaten.”

Many people have told me, for example, that they are free to divorce because they married an unbeliever. “I thought he/she would become a Christian, but that didn’t happen. We need to get a divorce.” They recall that they knew it was a mistake, but they married anyway—hoping it would work out. Others claim that they just married someone who wasn’t a good match, someone who wasn’t a true “soul mate.” A wrong start in marriage does not justify another wrong step. “And we know that God causes all things to work together for good,” says Romans 8:28, “to those who love God, to those who are called according to His purpose.”

God tells us not to be poured into the world’s mold. Instead we are to be transformed and that begins in our minds. By doing this, God will give us exactly what we need for our lives. God’s will for us is good, acceptable, and perfect (Romans 12:1-2). Here’s the key for those who are now married: The Bible clearly says do not divorce (with the exception for extended, unrepentant sexual immorality). God can take even the worst things of life and work them together for good if we will just trust Him.

6: “My spouse and I are incompatible.”

I don’t know a lot of husbands and wives who are truly compatible when they get married. In marriage, God joins together two flawed people. If I will respond correctly to my spouse’s weaknesses, then God can teach me forgiveness, grace, unconditional love, mercy, humility, and brokenness. The life of a person who believes in Jesus Christ is developed by responses to not only happy things, but also to difficulties. And those very difficulties include weaknesses. That is why we are told in Colossians 3:12-13 to “put on a heart of compassion, kindness, humility, gentleness and patience; bearing with one another, and forgiving each other.”

My spouse’s weaknesses are not hindrances. Instead, they are the doorway to spiritual growth. This is a liberating truth. If I will respond to my spouse’s shortcomings with unconditional acceptance, my love won’t be based on performance. I won’t say, “You need to live up to these expectations.” I will be able to accept my spouse, weaknesses and all. And that acceptance will swing open the door of change for not only my spouse, but also for me.

7: “Breaking the marriage covenant won’t hurt me or my children.”

When divorce enters a family, there are always scars. I know this firsthand; although I was an adult when my father committed adultery and divorced my mother, decades later there are still effects. Many consequences of divorce never go away. Blake Hudspeth, our church’s youth pastor, also understands the pain of divorce. He was 5 years old when his parents divorced, and it was hard for him to understand God as Father and to trust people. “The people I trusted the most split up.” He also found it difficult to accept love from others “because I didn’t know if they truly loved me.” And Blake developed a fear of marriage. “

Am I going to follow the trend of divorce, because my parents and grandparents divorced?” Blake’s father even wrote him and said, “This was the worst decision I made in my life. It was bad. It hurt you. It hurt our family. When I divorced your mom, I divorced our family because I broke a covenant that we were a part of.” Blake says that his parents (who both remarried) have embraced the gospel, resulting in him readily accepting advice and encouragement from them. “Watching the gospel play out … with my mom and dad was huge,” he says.

This may be the most devastating lie of all. Because in more than four decades of counseling couples, I’ve seen God do the seeming impossible thousands of times. In a dying marriage, He just needs two willing parties. God knows how to get us out of the messes we get ourselves into. I tell these couples about people like Chuck and Ann, who were involved in drugs and alcohol before God restored their home. Or Lee and Greg, who were engaged in multiple affairs. God brought them back to Christ and to each other. Now they have six children and a marriage ministry. Or Jim and Carol who had taken off their wedding rings and were living in separate bedrooms and about to live in separate worlds when God redeemed them. If you begin to think, There is no hope for my marriage, realize that, “With God all things are possible”.

13 Signs You Are Truly, Head Over Heels in Love

Save a Relationship from a Possible Breakup