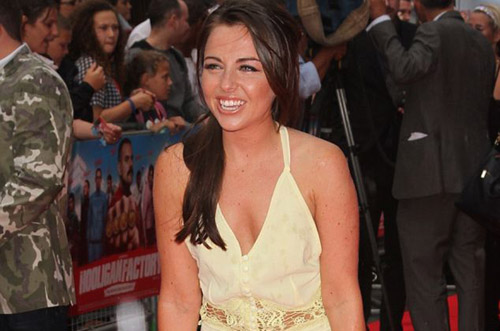 She’s known for her gritty soap role on EastEnders. But Louisa Lytton looked a world away from Walford as she stunned in a floor-length lemon gown at the Hooligan Factory premiere at the West End Odeon, Leicester Square, London, on Monday.

Louisa Lytton 25-year-old actress, who played the role of Ruby Allen in the soap, was radiant in her low-cut gown, which featured buttons along the bodice and sheer crochet detailing at the waist. The star’s hair was worn in a simple ponytail to add a casual edge to her elegant look. Meanwhile Celebrity Big Brother star Casey Batchelor, 29, also looked glamorous, wearing a plunging pink and black lace top which drew attention to her voluptuous figure.

The spaghetti-strapped top was teamed with simple black trousers, while Casey added a simple black clutch bag and a pair of pointed-toe silver heels. The reality star wore her long raven locks loose while she added a pink lipstick and defined eye makeup. British independent drama The Hooligan Factory is based in and around Essex. It charts the violent escapades of central characters Danny (Jason Maza) and former professional footballer Dex, played by director.

Nick Seven, as they embark on a quest to re-establish gang culture in the terraces after meeting in Wormwood Scrubs. It will also star Ray Fearon, Tom Burke, Steven O’Donnell, former EastEnders star Craig Fairbrass and TOWIE’s Chloe Sims. The Hooligan Factory goes on general release on June 13. Meanwhile, Casey has recently given some advice to newcomers who have entered the Big Brother house.

She told OK!: ‘I’m nervous for them. They don’t know what they’re letting themselves in for, ‘Romance is always good, but it’s always hard to watch having been involved in one in there.’ The star rose to fame as she appeared on CBB alongside raunchy actress Jasmine Waltz. The girls formed a convoluted love triangle, with Casey left heartbroken after Lee Ryan had a fling with Jasmine, who has since ended their brief relationship.