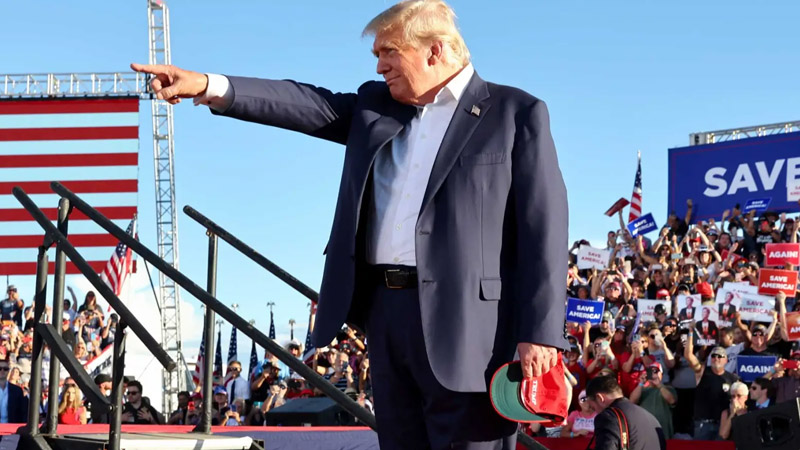 “I will tell you things about him that won’t be very flattering,” the former president told The Wall Street Journal of the Florida governor challenging him

DONALD TRUMP has suggested that if Florida Governor Ron DeSantis decides to run for the Republican nomination in 2024, he will reveal damaging information about him.

“I will tell you things about him that won’t be very flattering,” Trump told The Wall Street Journal on his private jet after departing a rally in Dayton, Ohio, on Monday. “I know more about him than anybody other than perhaps his wife, who is really running his campaign.”

Trump’s displeasure with the Florida governor’s political ambitions has increased as the former president prepares to launch his third presidential campaign. In Ohio, he stated that he will make a “very big announcement” at Mar-a-Lago on November 15. He is widely expected to declare his candidacy for president in 2024.

Trump dubbed his potential opponent “Ron DeSanctimonious” at a rally in Latrobe, Pennsylvania, on Saturday. DeSantis was also not invited to the following day’s pre-midterm rally in Miami, Florida. According to Rolling Stone, Trump was considering declaring his candidacy in Florida solely to “stick it” to DeSantis.

“I don’t know that he’s running,” Trump reportedly said on Monday. “I think if he runs he could hurt himself very badly.”

DeSantis has been raising campaign funds while traveling out of state to campaign for conservative midterm candidates like Doug Mastriano. According to Rolling Stone, Trump and members of his family believe DeSantis is stealing their branding and style.

Despite this, Trump told reporters outside a polling place in Palm Beach, Florida, that he had voted for DeSantis in the race for Florida governor.