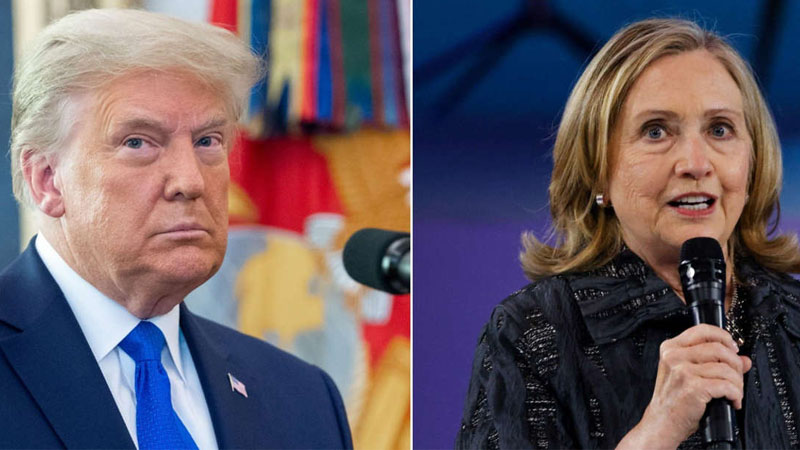 According to the New York Post, a new legal filing alleges that Clinton’s campaign paid an internet company to “infiltrate” servers at the White House and Trump Tower in order to link the former President to Russia.

Special Counsel John Durham filed a motion Friday regarding potential conflicts of interest in the case of Clinton campaign lawyer Michael Sussmann, who is charged with lying to the FBI (FBI).

Trump said Saturday that the latest pleading from Durham proves “indisputable evidence that my campaign and presidency were spied on by operatives paid by the Hillary Clinton campaign in an effort to develop a completely fabricated connection to Russia.”

He said that those who were involved in and “knew about this spying operation should be subject to criminal prosecution.” His son, Donald Trump Jr., tweeted, ‘BREAKING: Donald Trump and the RNC funded SIGINT collection AGAINST the Executive Office of the President of the United States, just like the Russians do. This is TREASON!”

Then he wrote that he was just kidding and that it was “Clinton and a big tech executive.”

According to the Daily Mail, Durham was appointed by then-Attorney General William Barr to serve as Special Counsel for the United States Department of Justice in October 2020 while Trump was President.

According to the indictment, Sussmann told former FBI General Counsel James Baker in September 2016 that he was not doing work “for any client” when he held a meeting. He presented “purported data and ‘white papers’ that allegedly demonstrated a covert communications channel” between the Trump Organization and Alfa-Bank, which is linked to the Kremlin, at the meeting.

However, in a section titled “Factual Background,” Durham’s new filing revealed that Sussmann “had assembled and conveyed the allegations to the FBI on behalf of at least two specific clients.” According to Fox News, this included the Clinton campaign and a technology executive (Tech Executive 1) at a US-based internet company (Internet Company 1).

Sussmann’s “billing records reflect,” according to the Friday filing, that he “repeatedly billed the Clinton Campaign for his work on the Russian Bank-1 allegations.” According to the filing, Sussmann and the tech executive met and interacted with another law partner who was working as General Counsel for the Clinton campaign. According to sources, that lawyer is Marc Elias, who worked at the law firm Perkins Coie at the time.

According to the filing, the tech executive worked in collaboration with Sussmann and an American investigative firm hired by Law Firm 1 on behalf of the Clinton campaign in July 2016. The tech executive also collaborated with numerous cyber researchers and employees from various internet companies to “assemble the purported data and white papers.”

According to the filing, the tech executive directed the researchers to mine internet data for “an inference” and “narrative” linking then-candidate Trump to Russia. In doing so, the tech executive expressed his desire to “seeking to please certain ‘VIPs,’ referring to individuals at Law Firm-1 and the Clinton campaign.”