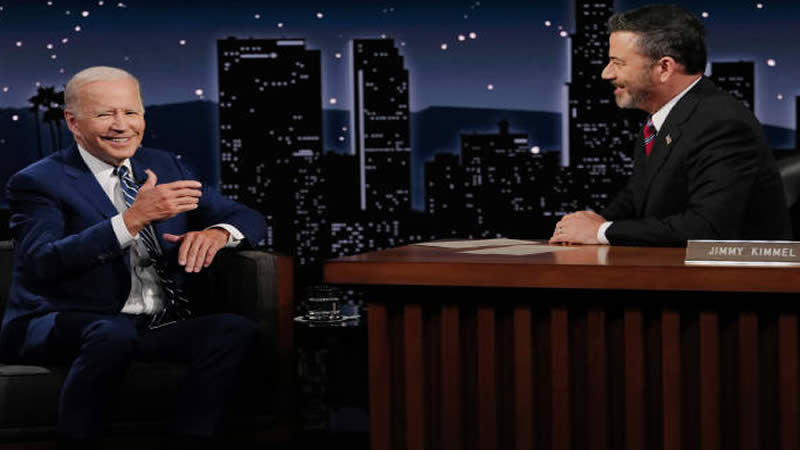 On Jimmy Kimmel Live!, Joe Biden made an appearance. It was his first in-person visit on a late-night talk program since becoming President of the United States on Wednesday, June 8th! And he had a lot to say about it!

During a large part of the interview, Biden and Kimmel discussed gun control, and the POTUS didn’t miss an opportunity to criticize Donald Trump when asked about the use of executive orders to try to stop the tragic gun violence that has occurred in Buffalo and Uvalde, Texas in recent weeks, to name a few examples.

“What I don’t want to do, and I’m not being facetious, is I don’t want to emulate Trump’s abuse of the Constitution, and constitutional authority,” Biden responded, after Kimmel had joked that “Trump passed those out like Halloween candy.” And he didn’t stop at just Trump, as the President went on to take aim at the Republican Party as a whole, according to deadline.

“I also get asked, ‘Look, the Republicans don’t play it square, why do you play it square?’ Well, guess what, if we do the same thing they do, our democracy would literally be in jeopardy and that is not a joke.”

Biden also spoke about the general shift of the Republican Party to the ‘hard right,’ and suggested that party members often vote against ‘common-sense’ gun control because of intimidation from the NRA and fear of being voted out. “This is not your father’s Republican Party,” he said.

“This is a MAGA party, a very different Republican Party and you find people who are worried, I believe, that if they vote for rational gun policy, they’re gonna be primaried and they’re going to lose in a hard-right Republican primary,” Biden continued.

He did, however, say that the American people have the power to change this by making gun control a voting issue, to put the pressure on the Senate to make the required changes to protect the public.

Other hot topics discussed by Biden and Kimmel included abortion rights, climate change, and inflation. Biden slammed the freshly leaked draft Supreme Court opinion to overturn Roe v. Wade, calling it “ridiculous” and said, “I don’t think the country will stand for it.

It’s clear that if in fact the decision comes down the way it does and these states impose the limitations they’re talking about, it’s gonna cause a mini revolution and they’re going to vote a lot of these folks out of office.” The President did say, though, that his administration is looking at using executive orders to defend abortion rights, and that federal legislation is also needed.

Biden also praised the success of job growth and the American economy in general since taking office. “We have the fastest-growing economy in the world,” he said.

“Unemployment rate is down to 3.6%. We reduced the deficit last year by $320 billion, this year we’re gonna reduce it by $1.7 trillion.” However, he did admit that the US is not immune to the issues of inflation, as we have all seen with the recent surges in food and gas prices. “Inflation is the bane of our existence,” he said.