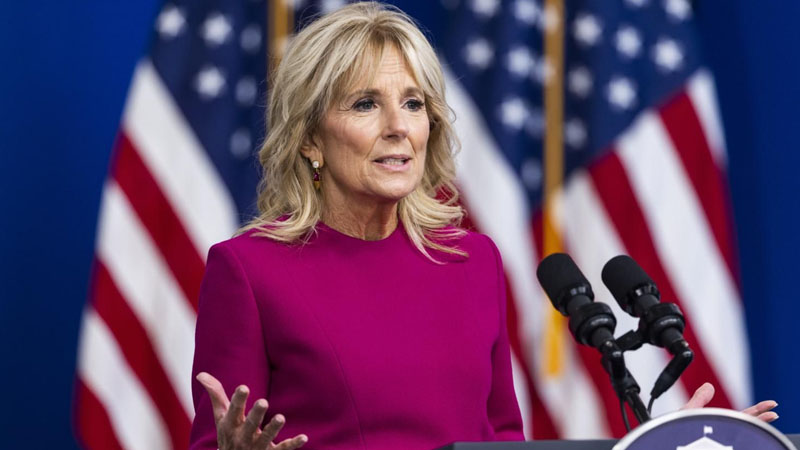 Jill Biden promotes Covid vaccines and takes part in political rallies — but only when her college professor schedule allows. In her quiet way, Jill Biden is reinventing the traditional role of the First Lady of the United States.

Attending a former governor’s funeral last week, President Joe Biden had to apologize for his wife’s absence. “The reason Jill is not with me today is she’s teaching today, full-time as a professor at Northern Virginia Community College,” the president said.

The announcement in September that the first lady was resuming face-to-face instruction at her college made headlines in the American press. Never before had a presidential spouse had a professional career outside the White House?

Jill Biden, now 70, married Joe Biden in 1977 when he was a widowed senator with two young boys. The couple later had a daughter together. A member of the national teachers’ union with a doctorate degree in education, Jill Biden continued teaching while her husband served as vice president under Barack Obama.

Like most educators in the United States, she taught remotely during the coronavirus pandemic, before returning to in-person instruction this fall. She now teaches English and writing two days a week. When she is not in the classroom, the slim, blond-haired Biden can be seen by the president’s side at private and public events, but also, more and more often, alone on stage.

The first lady is traveling around the country urging Americans to get vaccinated against Covid-19 and — ever since vaccines were approved for teenagers and younger kids — to also immunize their children. She has also campaigned in support of a Democratic candidate in a local election, attended the Tokyo Olympics, and was seen in a cafe with Brigitte Macron, the French president’s wife, as Washington was caught in a diplomatic crisis with Paris.

“She certainly has been sort of picking up the pace of her public appearances lately,” said Tammy Vigil, associate professor of media science at Boston University’s College of Communication. “In the modern era, it’s extremely expected of first ladies that they become more and more publicly active.”

Jackie Kennedy sought to preserve America’s cultural heritage and famously redecorated the White House. Nancy Reagan campaigned against drug use. And Michelle Obama launched a major movement promoting healthy eating and exercise among American children. By contrast, Michelle Obama’s successor Melania Trump “got into a lot of trouble because she wasn’t as active as she should be in terms of public service,” Vigil said.

Unlike Michelle Obama, who faced openly racist and sexist attacks, Jill Biden has so far been largely spared aggression — even in today’s tense political climate. That said, she still came under considerable scrutiny. Earlier this year CNN published a column on its website urging her to exhibit more “restraint” in her fashion choices after she was seen wearing a black leather skirt and patterned black tights.

“Any chance you might drop the “Dr.” before your name?” the columnist asked. “Dr. Jill Biden” sounds and feels fraudulent, not to say a touch comic.” The piece caused a public uproar for its message and condescending tone. “The First Ladyship has been behind the times as far as representing what American women do and how they really live,” said Vigil, the Boston University professor.

But while Biden pushes the boundaries of her role, she also tries to tread a careful line, mindful that the US first lady is not an elected official and does not possess official powers or duties. She does not openly meddle in politics, although some commentators see her as the inspiration behind Joe Biden’s short-lived initiative to offer two years of free community college to young Americans.

In her day, Hillary Clinton faced sharp criticism for being too active in promoting health care reforms while her husband was president. If the family life of a US president and the role of the first lady is still subject to “conservative” views in America, Vigil said that other members of Biden’s administration are pushing the boundaries in different ways.

Will Smith RECALLS domestic abuse in his new book, calls the traumatizing attack a ‘defining moment’