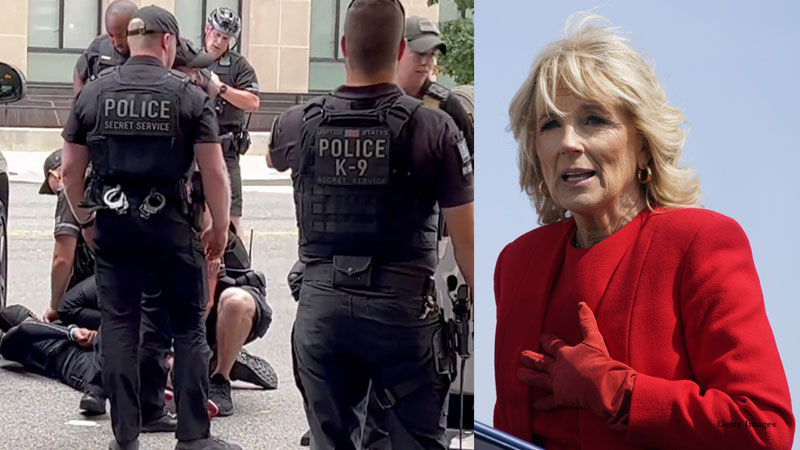 JILL Biden’s security team was on high alert when a scuffle broke out after a suspect tried to interrupt the first lady’s motorcade and fought off cops.

The incident started on Monday at 5:02 p.m. when the culprit approached Jill’s motorcade near the White House and got into a fight with Washington, DC police.

Photos from the Washington Examiner that Economics Reporter Zachary Halaschak was able to obtain show police holding a person down on the ground who appears to be in handcuffs.

Along with Secret Service police, the K-9 unit was present.

The U.S. Secret Service confirmed to The Sun, that someone “attempted to enter the restricted portion of the roadway and disregarded orders to stop from US Secret Service Uniformed Division Officers.”

The person then tried to run away from the police before being taken into custody.

Authorities told The Sun that when the “minor physical altercation” started, two officers were taken to a local hospital.

“The subject was charged with assault on a police officer, failure to obey, crossing a police line, and resisting arrest,” according to the Secret Service.

After demanding medical help, the suspect was also brought to the hospital.

The police claim that the event had no impact on the motorcade’s movement.

The police making the arrest are visible in a video posted to Twitter.

As of yet, the suspect has not been named.

Mother of 12 kids, pregnant for 16 years in a row, says: ‘Children are a blessing’

Get Your Own Tuscan Decor