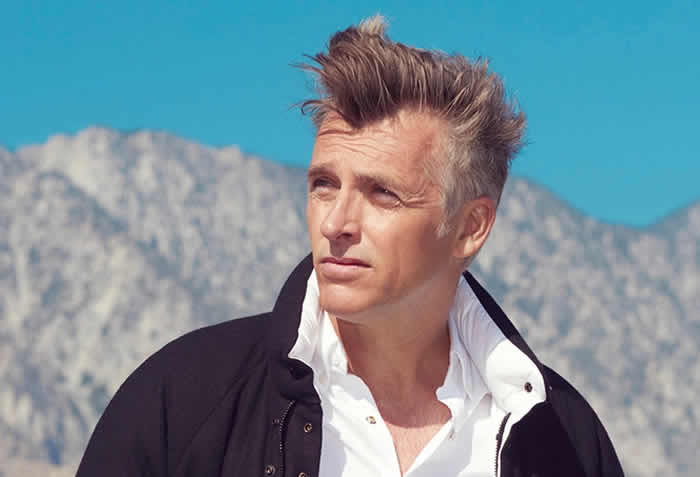 As two of the world’s most famous male models, John Pearson and Derek Zoolander have graced countless magazine covers, fronted innumerable campaigns and, naturally, are both really, really, really ridiculously good-looking. Here’s where they differ: John Pearson is a real person — and he doesn’t own a signature glare à la “Blue Steel.” However, “My son does a mean ‘Magnum,’ ” Pearson quips to The Post.

#tbf #perryellis #Campaign #fashion #model #style #menstyle #elegant Had the pleasure of shooting this brand for several years, multiple seasons, this instance with #arthurelgort, Dad of #anselelgort ..funnily enough, this is one of Mrs Peo’s @edmondalison #favourite #pictures of her old man! Happy weekend all…#johnpearson

The 50-year-old Brit, once hailed as the world’s first male supermodel by the Sunday Times, is also far from the dim-witted stereotype reinforced by Ben Stiller (also 50) in the new sequel, “Zoolander 2.” “[Zoolander is] a complete parody,” Pearson says with a laugh. “I don’t think anyone would survive in the fashion business if they lived an iota of that fantasy.” Still, the Los Angeles-based model knows a thing or two about longevity, with 2016 marking the 30th year of his uncommon career. In the last half-decade alone, Pearson has worked a crystalline gaze in the pages of Vogue Italia and Interview, flaunted salt-and-pepper hair in youth-driven indie mags like VMAN, Hercules and Arena Homme +, and put teenage waifs to shame on the Prada runway. The father of three — who’s been married for 22 years to Alison Edmond, a well-known stylist — even has a fan page in the blogosphere and a burgeoning presence on Instagram. “Luckily, I’m of a certain age where there aren’t too many of us around,” Pearson says of the rarefied group of guys still working today that earned the prefix “super” in the modeling profession’s ’80s and ’90s peak. Besides, “I’ve still got my own hair, my own teeth, I’m pretty well-maintained and don’t have a belly,” he jokes.

Born and raised in Sheffield, in northern England, Pearson got his start at 18 while working as a manager of a denim store. “One day a guy came in and said, ‘I’d like to take pictures of you. I’m a photographer,’” Pearson recalls. “I was terrified. But he did take pictures and I thought, ‘Actually, they look quite good.’” By 1986, when he was 21, Pearson had left England for New York City, where his first gig was posing for photographer Bob Frame, famous for taking the first test shots of another iconic face. “We went into the studio — and then Cindy Crawford turned up to say hello. She’d just arrived from Chicago the week before,” Pearson recalls. “Three days later I did the cover of Self magazine with Uma Thurman, and that was it,” he adds. “From then on it just didn’t stop.” And it wasn’t long before the 6-foot-2½-inch Yorkshireman took his place in the supermodel pantheon. In 1990, he was cast in George Michael’s era-defining “Freedom! ’90” music video, directed by David Fincher and co-starring Crawford, Naomi Campbell, Linda Evangelista, Christy Turlington and Tatjana Patitz as lip-syncing ingénues. Throughout the ’90s and into the aughts, he inked lucrative contracts with brands like Valentino, Perry Ellis, Ralph Lauren and Calvin Klein, posing for everyone from Mario Testino and Helmut Newton to Peter Lindbergh and Patrick Demarchelier.

To boot, he holds the distinction of being the only male model to appear in American GQ editorials across three decades. Despite the impressive client list, Pearson is the first to admit that being objectified for a living hasn’t always been breezy. “I got fed up with people touching my face,” he says. “There were times I wanted to stop, and times I did stop and turned down hundreds of thousands of dollars.” “At that point [in your career], you really are a showman,” he adds. “You’re the center of attention, but sometimes you don’t want to be the center of attention — even though you signed up for it.” Needless to say, things have slowed down a bit for Pearson since his heyday — a time before musicians, reality stars, athletes and actors (and actors playing models) became first pick for endorsements, glossy covers and multi-page spreads. Still, don’t expect Pearson, a recent convert to the cult of hot yoga, to split anytime soon. “I’m not allowed to say what it is, but I’ve got another major fragrance campaign coming out in spring,” he says. “So there’s life in the old dog yet.”