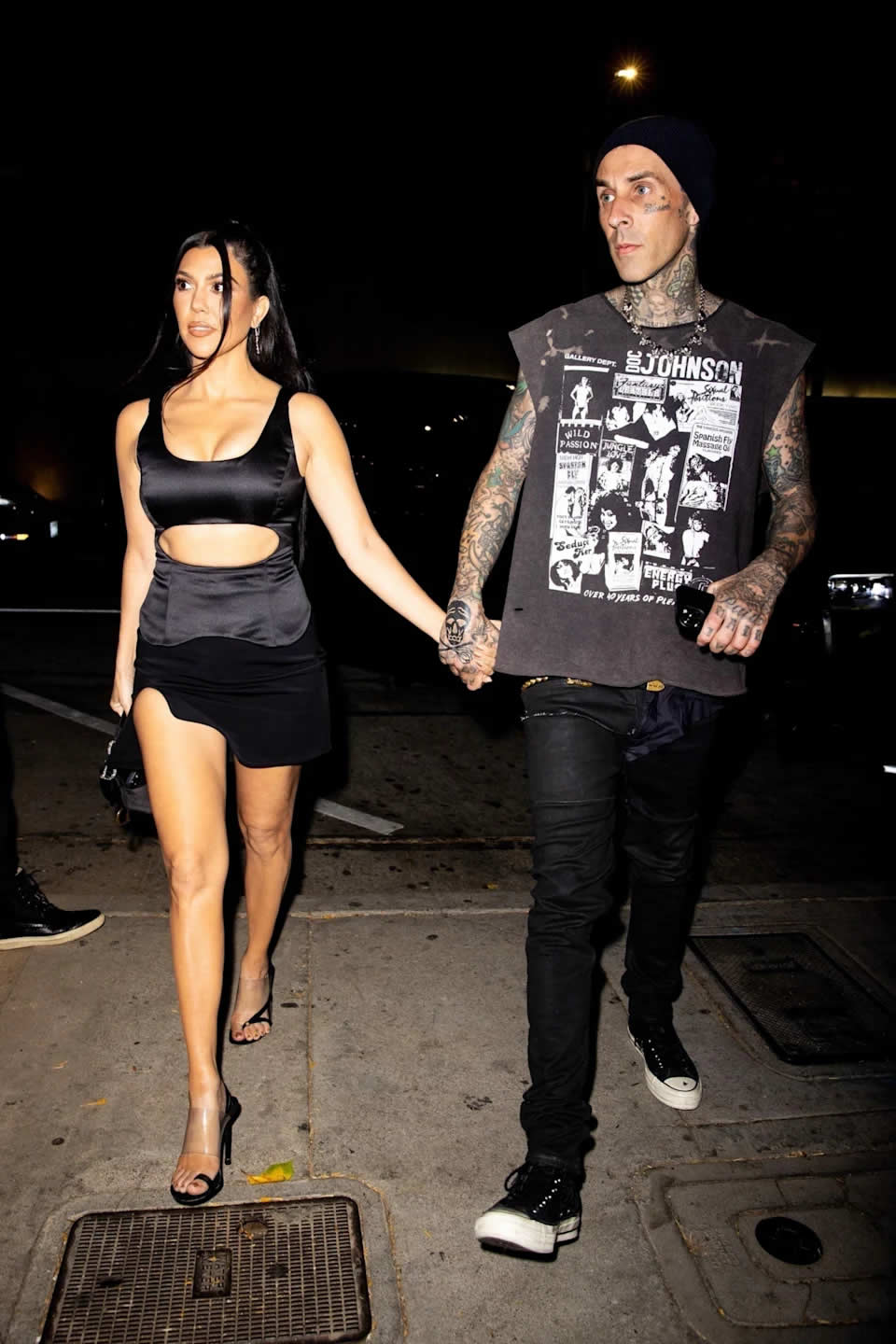 Like much of the internet, I’m obsessed with Kourtney Kardashian and Travis Barker’s PDA-filled relationship—down to the thumb-sucking video posted on Instagram. As a sign of how hot and heavy this relationship is, they’ve naturally started syncing their styles.

Kourtney has been wearing way more black, dressing in punkier, sexier outfits like leather shorts with matching cuissardes, an itty bitty silk black dress with a cut-out at the stomach, or a t-shirt emblazoned with “SUCK”, and “BITE.” Barker’s style is more simple—he often wears a cut-off graphic T-shirt and a pair of low-slung black jeans—but has the same rude vibe.

Obviously, there’s something about Barker that is making Kardashian tick, and it is altering her style. He is in that strange world between outré dressers like fellow artist Carlos Santana and the regular dudes with normcore taste à la Ben Affleck.

Barker reminds me of a small-town high school punk who goes into the city to thrift for clothes. (Provided that punk had some liquid cash—some of Barker’s pieces, even his flannels, appear expensive). Swoon.

Even in his early days as a drummer in Blink 182, when he dressed in nothing more than pulled-up socks, Vans, and a cut-off T-shirt, Barker had an allure. The whole band was dressed in purposefully unfashionable clothing, plucked from the mall or the skate shop.

Barker was always silent, drowning in huge shorts that went to his ankles, and a growing array of tattoos. He’s grown up along with his style: now there are flannels over graphic T-shirts and pants with artful designs, like skull symbols. The Vans remain, though.

Barker and Kardashian aren’t the only new, purified Hollywood couple. Machine Gun Kelly, a friend of Barker’s, has snagged actress Megan Fox. The two have rowdy style: Kelly, unlike Barker, is a ‘90s baby and figuring out his style, dressing in hot pink suits and dying his tongue black. Looking back into fashion history, there’s also Jane’s Addiction’s Dave Navarro, who charmed Carmen Electra and later the runway world when he walked for Anna Sui in spring 1997, wearing a lavender lace camisole top, lace panties, and low-slung leather pants.

Maybe the appeal of a tattooed, soft-spoken man lies in the fact that the style is eternally youthful. He’s everyone’s high school boyfriend in a band or the dream of one, but more grown-up. Barker knows what works for him—namely, band tees, some of which he’s most likely had since his first days with Blink 182. His aesthetic is obviously rubbing off on Kourtney, too, and it looks quite good. Spooky-hot. As history has shown us, whether it’s with Victoria and David or Brad Pitt and Gwyneth Paltrow, complimentary styles are just another way to show your love for each other. In this case, there’s nothing better than a guy who is grounded in, well, Vans.