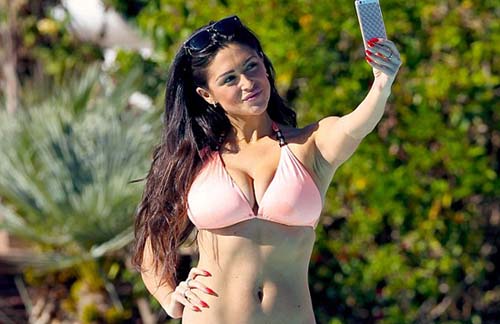 She recently declared that she would no longer be going topless on photoshoots. But while Casey Batchelor might not be willing to pose for anyone else, she seemed more than happy to take pictures of herself on a recent sunshine break.

The Celebrity Big Brother star, who squeezed her natural GG’s into a pale pink bikini, was seen trying to take selfie after selfie of herself by the pool. It’s not surprising that the 29-year-old fancied capturing the moment though as she looked sensational in the pale pink string bikini which revealed her well-loved curves.The pretty Essex star’s brown hair was worn loose down her back while she sipped a refreshing looking cocktail by the side of the pool.

And after trying to take some snaps she pulled her long hair off her face as she took a dip in the refreshing water. Not long ago Casey Batchelor revealed that she would be turning her back on topless modelling in order to pursue a career in acting. She told OK! magazine: ‘I won’t be going topless again. I want to be taken seriously and progress on a different path now. ‘I am serious about comedy. 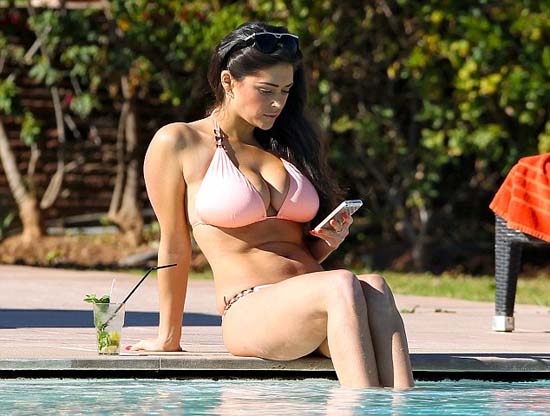 I want to get into TV and be the next Barbara Windsor.’However it wasn’t long until she went back on her word and posed in next to nothing – with just bunches of daffodils to protect her modesty. Meanwhile as she does her best to break into comedy Casey Batchelor has been also making the most of her new found fame. The stunning star has been seen attending numerous events over the last few months with her new celebrity pals – Ollie Locke and Danielle Armstrong.

In fact Casey Batchelor has proved to be a bit of rock for TOWIE star Danni as she struggles with her relationship with James Lock. The pair have hit the town on a couple of occasions this week alone and it was in no time at all that Casey had a smile back on Danielle’s face. Casey Batchelor who was involved in love triangle with Lee Ryan and Jasmine Waltz in the CBB house, has most recently been linked to Miles Kane. 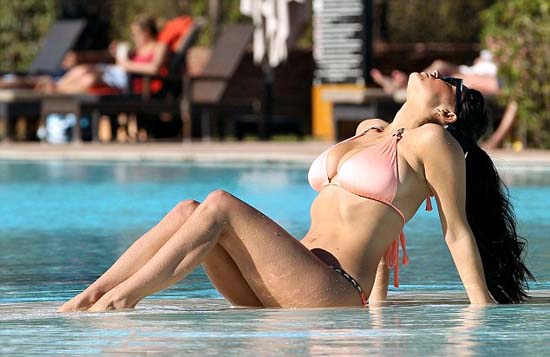 And after being spotted kissing, Casey Batchelor recently revealed that they are still texting – as she told the Sun:  ‘We text all the time and speak on the phone. Me and Miles really get on – there’s a lot of banter between us. ‘He says I’m really funny and likes the way I take the piout of him.’ -Dailymail