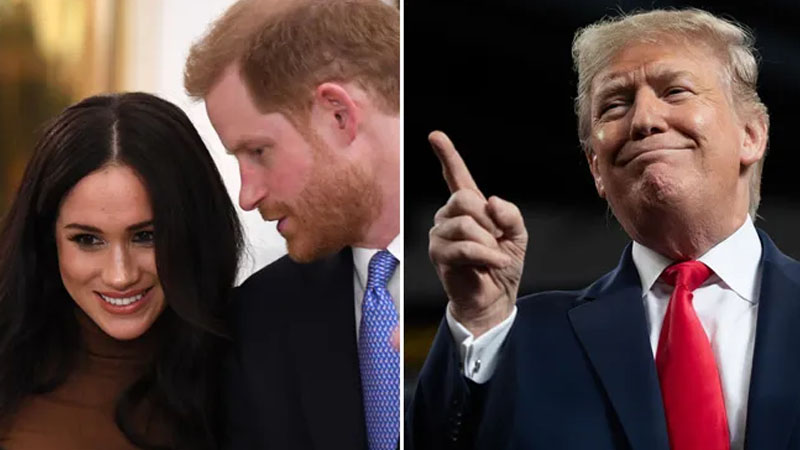 In an interview, Donald Trump claimed that Meghan Markle was “disrespectful” to Queen Elizabeth and that she “used horribly” her husband, Prince Harry.

In Florida, the former US President spoke with Nigel Farage. The entire interview will be aired on GB News on Wednesday night.

Trump stated his dislike for Meghan, claiming that he has been a fan of her since “day one” He also shared his displeasure at her disrespect for Queen Elizabeth. “I think it’s ruined his relationship with his family, and it hurts the Queen,” he said.

The former US President expressed his admiration for the Queen, calling her a great woman. Trump went on to say that he believes Harry is being “used horribly” by his wife, which the Duke of Sussex will soon regret.

When Farage asked about Meghan’s use of the Duchess of Sussex letterhead writing paper to lobby members of Congress, Trump responded, “She is trying to do things that I think are very inappropriate.”

Trump praised the Royal Family for being fantastic and strong during his 2019 visit to the United Kingdom.

Trump, on the other hand, expressed his displeasure when Harry and Meghan moved to the United States. He explained the former “The star of “Suits” was described as “nasty,” and he tweeted that the “US will not pay for their security protection.” They must pay! “which is now unreachable due to Trump’s suspended Twitter account After giving up their royal duties, the couple relocated to the United States.

When it comes to the royal couple, Trump is known for being direct. He stated earlier this year that if Meghan Markle chooses to run for president in 2024, he will campaign for her. He also once told Fox News, “I hope that happens because if that happened then I think I’d have an even stronger feeling towards running. I’m not a fan of hers.”

Trump’s recent interview, which was recorded in Florida on Monday, will also highlight him addressing the Jan. 6 Capitol riot and his impeachment trial for allegedly inciting it (the U.S. Senate later acquitted him).

‘Fredo is gone!’ Donald Trump Reacts to the ‘Great News’ That Chris Cuomo Is *Out* of CNN