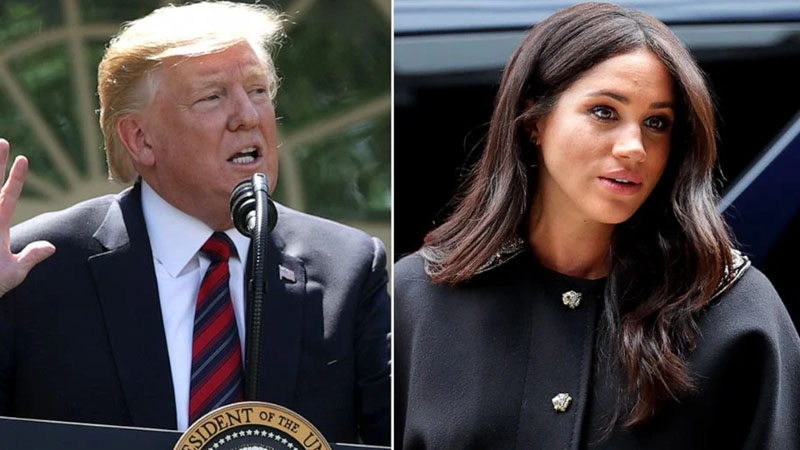 Donald Trump Accuses Meghan Markle Of Being ‘Disrespectful’ To The Queen, And Twitter Reacts.

On social media, Donald Trump’s latest remarks on Meghan Markle elicited diverse reactions, with some accusing her of being “disrespectful” to Queen Elizabeth and the royal family.

During a wide-ranging interview with British broadcaster and former politician Nigel Farage that aired on GB News in the United Kingdom, the former president, 75, launched a storm of vitriol at Markle, 40. Trump stated that he was “not a fan” of Meghan Markle and that he believes Prince Harry has been “horribly” used by his wife.

“I believe Harry has been exploited, and he has been exploited cruelly.” “I think it’s wrecked his relationship with his family, and it’s hurting the Queen,” Trump said in the interview, according to the Daily Mail.

“I think [Meghan] has been incredibly disrespectful to the Queen, who is such a magnificent woman, such a fantastic person, such a historic person,” he concluded. I believe she is discourteous to the royal family, particularly the Queen.” After the Sussexes stepped down from royal duties last year, Markle and her two children Archie, 2, and Lili, 5 months, are currently living in Montecito, California, with Prince Harry and their two children Archie, 2, and Lili, 5 months.

Some seemed to agree with Trump’s assessment of Markle, with one person saying, “Well, he’s not wrong.” She made it obvious from the beginning that she wanted the royal link to help her image and profile.” “When he’s right, he’s right,” one user tweeted about the former president, while another said, “He stated that [100 emoji] CORRECT!!!” Another netizen said, “The first words out of his mouth I genuinely agreed with.”

Other Twitter users chastised Trump, with some noting out that during a visit to the United Kingdom in 2018, he made news for walking in front of Queen Elizabeth while inspecting her honor guard. People who turn their backs on the monarch are deemed disrespectful, according to the BBC’s list of dos and don’ts when seeing the Queen.

With a rolling eyes emoji, one reader remarked, “I don’t think [Trump] is the ideal person to talk about disrespect.”

Another person remarked, “Says the man who broke royal protocol by shaking hands and walking in front of the Queen…after making her wait.”

“Because Meghan is Black and a woman, Trump has an issue with her.” He despises any lady who doesn’t know her place and bows to him. Another Twitter user remarked, “He would despise me.”