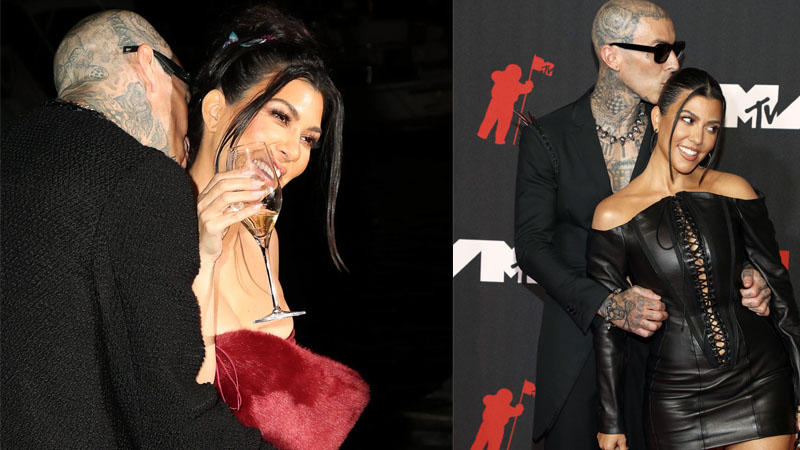 We still can’t get over the steamy make-out photo from the MTV Video Music Awards 2021 which saw Kravis making out in a bathroom stall before heading to the event.

Kourtney Kardashian and her now-husband, Travis Barker, were joined for the shoot by lovers Megan Fox and Machine Gun Kelly. The foursome met up in New York City for a photo of them all kissing in a bathroom, striking poses in every toilet spot possible.

The behind-the-scenes looks at events like MTV’s VMAs and the Met Gala are arguably the best parts of the ordeal. Tongues were literally wagging over the bathroom photos that had Kravis fans obsessed with the hottest couple in Hollywood.

MGK and Barker performed their emo-rock hit Papercuts at the VMAs. However, it appears that they went on voice-rest before taking the stage as they made out with their girlfriends.

The couples packed on the PDA, and the photos have us speechless a year later. Machine Gun Kelly, Travis Barker, and their girlfriends, Kourtney Kardashian and Megan Fox, are seen making out in a bathroom before the Met Gala.

Barker and Kardashian are kissing, as are MGK and Fox, and it was so hot in the stall that fans were getting hot and bothered – they couldn’t take it anymore. Some fans complained that there was too much PDA, while others called it “couple goals.”

The pre-VMA photos transformed into a full-blown bathroom photoshoot, complete with urinals in the background. The combination of high and low culture is something we never expected to see from A-listers.

The tatted-up rockers paired with the glamorous stars captivated fans as the photos made headlines. However, this isn’t the first time Kardashian has been photographed posing in the restroom.

She has previously shared her photos sitting in bathtubs…

Kourtney has also shared her photos posing by the sink…

So it shouldn’t have come as a surprise when she posed in front of urinals at the VMAs in 2021. Kourt captioned the photo, “Don’t mind us,” with Fox and Kardashian strategically placed to block the actual urinal from view.

Kravis also enjoys being in the bathroom, and their most recent advertisement for Daring, a new plant-based chicken company, showed them nearly naked in a bathtub surrounded by food and drink.

US intelligence chief says documents recovered from Mar-a-Lago are being assessed for damage: report