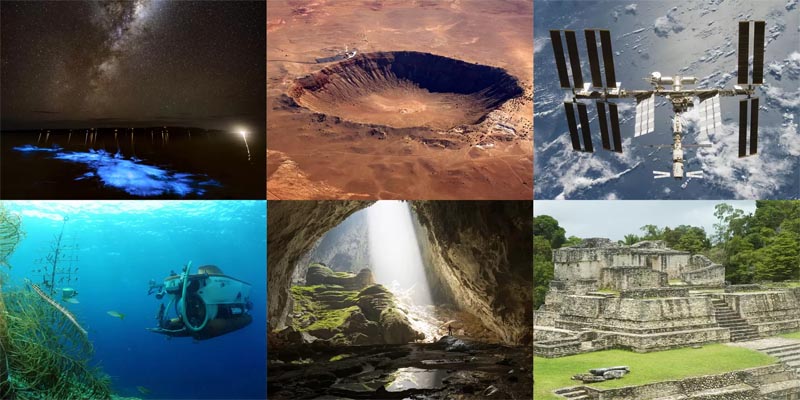 Earth is an awe-inspiring beautiful planet we live on and all of us had our eyes bug out seeing the wonderful creation around us. There are many biggest things in the world right from tiny miniatures to the biggest creatures, the earth is the home for all.

“What a wonderful world” – the song is sung by Louis Armstrong and who are we to deny. Expounding on the things around us, we bring you the top 10 biggest things of the world. To many of you, it might be an eye-popping experience when you continue to read it. Let’s take a quick drive through on this thread to encounter the things which are big. Here are the 10 biggest things in the world

Sequoia trees are the largest living things on the planet. They are gigantic and can live up to 3500 years old. General Sherman, the largest tree in the world is found at California’s Sequoia National Park. The tree measures about 52,500 cubic feet and was reckoned about 2000 years older. The age of the tree is estimated by a number of rings inside it.

General Sherman (279.9 feet) has lost a huge branch due to fire and Hyperion was ranked first in the tallest trees in the world measuring up to 379.7-foot-tall and is located in California.

The evergreen plan develops green cones at the age of 12 years, however, they remain closed until the age of 20 years till the tree reaches maturity. Both male and females cones develop on the same treen and approximately adult tree has 11.000 brown cones that are approximately 2.8 inches long, later each cone produces 230 seeds.

The seeds are small and brown in colour. The wood type of the tree is brittle and it cannot be used in the construction industry. The trees are extremely heavy and large, however, they can be only used for the production of fence posts and toothpicks. Giant sequoias are a popular tourist attraction.
National Parks in the USA

Salt Flats also knows as Salt pans. They result because of evaporation rates exceeds precipitation rates where the salt and other minerals are left on the surface and over the course of many years they form Salt flats. They are usually shining white under the sun and commonly found in deserts.

Salar de Uyuni is the largest Salt flat measuring at 10,582 kilometres at an elevation of 3,656 meters above the sea level and is located at South Bolivia of Daniel Campos Province in Potosi. It is believed that the Salar de Uyuni was formed because of the Altiplano, a high plateau and hence there are no drainage outlets which means water from teh surrounding mountains collated to form a giant late.

The lake was evaporated because of the fierce Andean Sun with a thick crust of salt remains forming what we call it as a Salar de Tyuni, however, Aymaran, gives another story where it is believed that the mountains surrounding the salt flats are known as Kusina, kusku and Tunupa.

Son Doong Cave is one of the biggest things in the world and the world’s largest cave situated near Laos Vietnam Border. The cave passage is about 9 kilometres in length, 150 meters wide and 200 meters in height. The two big dolines on the case allow the sunlight to penetrate inside the cave resulting in the growth of flora and trees.

This cave became a tourist spot allowing only 800 permits this year and the season runs from February to August. Cave entry needs permission and is limitedly accessible. Inside the cave, there is a large subterranean river that flows fast. After August, rainfall causes the rise in the water level of the river thereby causing the cave inaccessible. Also, read about incredible caves in the world.
The cave was discovered by a farmer named Ho Khanh in 1991. According to the farmer, he was looking for the agarwood in the forest at that time and experience heavy rain while searching for the agarwood in the forest. Later, he decided to take shelter because of the heavy rain and somehow the shelter that he stood was right at Son Doong cave.

It is believed that the cave was formed by around 2-5 million years ago and the river runs buried along with the faulty rain. The water current created erosion and creates a giant tunnel today.

Dubai Mall is the largest shopping mall in the world. It is situated at the heart of the reputable commercial area of Dubai called,” The Centre of Now.” It is likely said that more than 54 million visitors every year.

The Sega Republic is the theme inside the mall where all Sega games played in one house and also plenty of high adrenaline rides in the mall. The waterfall inside the mall is the is one of the unique because of its an illusion waterfall.

Elephants are one of the smartest animals in the world and considered as largest mammal on the land. They have a massive body, long ears and huge trunk, which uses for eating, to pick objects, for drinking water, bathing and as a horn.

They live in the substantial land for their survival and weight up to 7000 kilograms and grow up to 13 feet tall. They tend to be in herds and move around. Pounds of plants are consumed on a daily basis by them. Hence, they require extensive land to meet their demands.

Often, they come in competition with people for the resources due to their great demands of survival. Elephants perform “burial ceremony” when they lose a member of their herd. During the process, they gather around the body and stay in silence for some time. Branches of the trees have been used to cover the body before they leave.

The species can easily identify them in the mirror and they don’t like peanuts. The species flap their ears to cool themselves and the water they use their trunk as a snorkel.

Jackfruit is the world’s largest fruit and is richly filled with nutrients. Not just the fruit but the seeds are also proven to be healthy and delicious. They weigh up to 35 kg, 90 cm in length and 20 cm in diameter.

Jackfruits are high in magnesium, dietary fibre, Vitamin b6 and antioxidants and have very low fat which makes the fruit very healthy for an individual. It helps in protecting against cancer, ageing, degenerating disease and is good for eyesight. It has also got good amounts of potassium and electrolytes which are beneficial for skin and bone health.

The blue whale is the world’s largest animal weighing over 180 tons and reaches up to 29.9 meters in length. The interesting part is, these whales feed on krill and don’t feed on humans. On a single day, they feed up to 3600 kilograms of krill.

These whales were hunted for over 100 years near to be extinct by whalers until the International community has stood up for their protection in 1966. Today, there are about 10,000 – 25,000 blue whales all around the world. They are found in the Atlantic, Pacific, and the Indian Ocean. It is also one of the heaviest animals in the world.

The Largest swimming pool in the world is located at San Alfonso del Mar, a private resort at Algarroba in Chile. The resort is situated about 100 km’s from West Santiago.

Quoting on the size of the swimming pool might make you awestruck, Pool is stretched across 3,323 feet long and contains 250 million litres of water and covers about 20 acres with a depth of 11.5 feet maximum. The Pacific Ocean is the water source for the pool.

The water pumped is being treated and filtered well for the pool use. The construction took for about 5 years and cost about Euro 2 million and was built by Fernando Fischmann.

Mount Everest is the highest mountain in the world. The height of this expounded to be 8,840 meters or 29,002 feet. It is also known as Chomolungma which means Goddess Mother of the world (Tibetan name) and Sagarmatha (Forehead in the sky), Nepali name. It has been an inspiration for many to submit it. In 1921, George Mallory was among the first to lead an expedition to summit the Mount Everest. It situated at Nepal- China border.

Niagara waterfalls are collective of three waterfalls situated between the international border of Canada and the United States. For over the decades it has been a honeymoon destination for many couples and for sightseeing. Three waterfalls Horseshoe falls, American Fall and Bridal Veil Fall collectively form Niagara Falls.

The rainbow that comes out at this fall makes the environment even mistier and adds beauty to the place. It is one of the most famous biggest things in the world among tourist. It is also one of the world’s most beautiful waterfall.

8 Best Abs Exercises of All Time

10 Different Types of Noses and Their Meanings