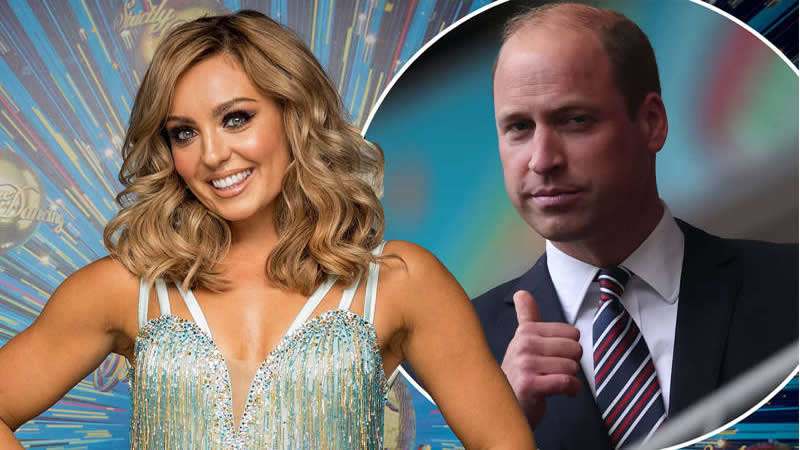 Strictly Come Dancing’s Amy Dowden has revealed she’d love to have Prince William as her next celebrity partner.

The professional dancer, 30, has set her sights on the Duke of Cambridge, 39, taking a turn on the dancefloor, noting that she believes he has ‘a nice posture’.

Meanwhile, Amy also gave her verdict on the news that Anton Du Beke is set to hang up his dancing shoes and become a judge this series as he replaces Bruno Tonioli.

Discussing all things Strictly on Fubar Radio’s Access All Areas, Amy revealed that she’d love to get the royal in sequins, while she also has her eye on Hollywood hunk Hugh Jackman, 52.

She told hosts Stephen Leng and Bobby Norris: ‘For me, I always say, from looking at him in The Greatest Showman, I reckon Hugh Jackman’s teachable you know? Another one I’d love to dance with is a Royal. A member of the Royal Family.

‘I think William looks like he’s got a nice posture. So that’d be an advantage – got a good ballroom frame!’

The Welsh beauty also told how ‘exited’ she was that Anton would be stepping into the judges role alongside Shirley Ballas, Motsi Mabuse and Craig Revel Horwood.

She said: ‘I’m so excited. I thought he was brilliant when he filled in last year, because he had a few weeks where he replaced Motsi.’

She went on: ‘I think it’s quite nice for us pros because he knows it from our perspective as well and what the celebrity is going through.

‘So I think for us pros that’s quite refreshing. He obviously knows his knowledge. He lives and breathes Strictly. So yeah, I’m really excited.’

On what type of judge she think he’ll be, she added: ‘I don’t think he’ll start too generous but I do think he’s going to fair.’

Anton’s appointment isn’t the only change on the show this year as fellow pro dancer Janette Manrara was recently announced as Zoe Ball’s replacement on It Takes Two.

Discussing Janette’s big role, Amy gushed at how happy she was for the dancer, but at the same time admitted that things would be ‘strange’ without her.

She said: ‘It’s going to be strange, but I’m also at the same time delighted. She’s got herself her dream role. She’s worked really, really hard.

It’s great to see progression and, you know, to show that if you work hard at something, if you believe in it, dreams can come true.

‘So I’m delighted for Janette. And I know like again, she lives and breathes Strictly, so I don’t think she could have ever pulled herself away from the show. So this is perfect!’

It comes as Amy’s fellow Strictly star Oti Mabuse revealed she would consider another role on Strictly Come Dancing in the future, but probably not as a judge.

The professional dancer, 30, has soared to victory twice on the BBC series but wouldn’t want to join the panel as her sister Motsi is already a judge.

Oti appeared on Steph’s Packed Lunch on Wednesday alongside fellow dancer Johannes Radebe, 34, who revealed he would like to see an all-male couple on this year’s show.

Asked about becoming a judge, Oti said: ‘I don’t know, I don’t like to jinx things. I feel like my sister’s there and she’s doing such a brilliant job, maybe something else, maybe another role…’

Oti also discussed how, this year, the professional dancers are having to rely on gyms to get into shape for the new series, rather than regular dancing.

She said: ‘It is hard. We’ve never been in this situation of having to go to the gym to get fit. We usually dance, so we are trying to get into it.’

WWE Congratulates Becky Lynch And Seth Rollins On Their Marriage