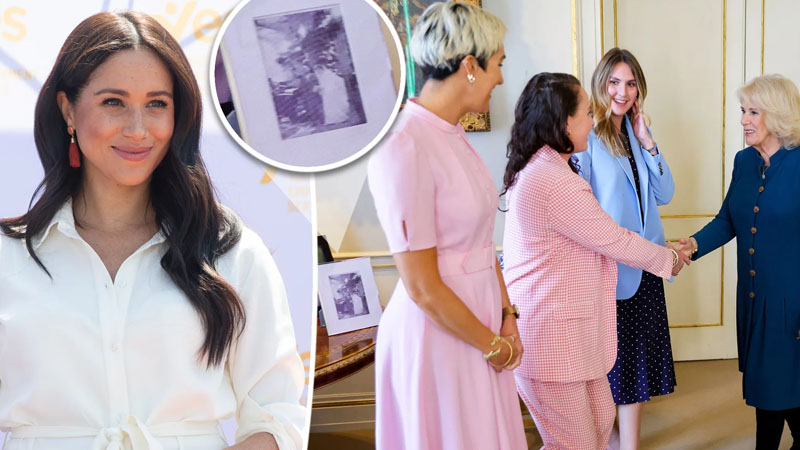 A picture really is worth a thousand words. A series of highly telling details hidden in a recent video from inside Prince Charles and Camilla, Duchess of Cornwall’s home have been found by eagle-eyed royal admirers.

The video was filmed on Tuesday, while the duchess was hosting a special International Women’s Day event at her and Charles’ London home.

Few guests bothered to look at the decorations because the house was full of notable women, including Emerald Fennell, who plays Camilla on The Crown.

However, as the camera pans around one of the London home’s luxury accommodations, we see a series of images pop up on a side table that gives a very clear picture of Charles and Camilla’s ties with the rest of the royal family.

Despite reports of a “rift” between Charles and his youngest son, Prince Harry, and his wife Meghan Markle, images of the couple were displayed prominently at Clarence House.

At the very front of the side table, a little black-and-white portrait of Charles bringing Meghan down the aisle on her wedding day in 2018 sat in prize position.

A close-up photo of a smiling Harry was hidden behind it, suggesting that the couple will continue to retain a particular place in Charles and Camilla’s hearts despite their royal departure in 2020.

The Duke and Duchess of Sussex weren’t the only royal family having photos on display at the couple’s house, of course.

For the head of the table were two large portraits shot at Prince George and Prince Louis’ royal christenings.

On the day of George’s christening, one image showed a pleased Prince Charles beaming as he cradled his first grandchild, George.

The second photo is a family image shot at Louis’ christening in 2018, with Charles and Camilla posing alongside Harry and Meghan on a couch in front of them.

Charles and Camilla are said to have a strong bond with the Cambridge children, visiting them frequently and spending time with them during holidays and school breaks.

Two final framed photos hung behind all of this: a black and white portrait of the Queen Mother, with whom Charles was close before her death in 2002, and artwork of a number of corgis.

The little display shows how important family is to Charles and Camilla, even those who are no longer alive.

However, royal watchers observed that the collection of images had all three of Prince William and Kate Middleton’s children, but the Sussex children – Archie and Lilibet – were missing.

Some suspected that this was a smear job against Harry and Meghan, who moved to the United States in 2020 with their son Archie and haven’t returned to the UK with Lilibet since her birth in June 2021.

Others said that Charles and Camilla withheld photos of their grandchildren out of respect for the Duke and Duchess of Cornwall, who keep their children’s pictures private.

Since Lilibet’s birth, the couple has only released one photo of her, and photos of Archie have been scarce since their royal departure in 2020.

While there will always be speculation about the internal workings of the royal family, these sweet images show how much Charles and Camilla value their entire extended family, including those who live on the other side of the world.