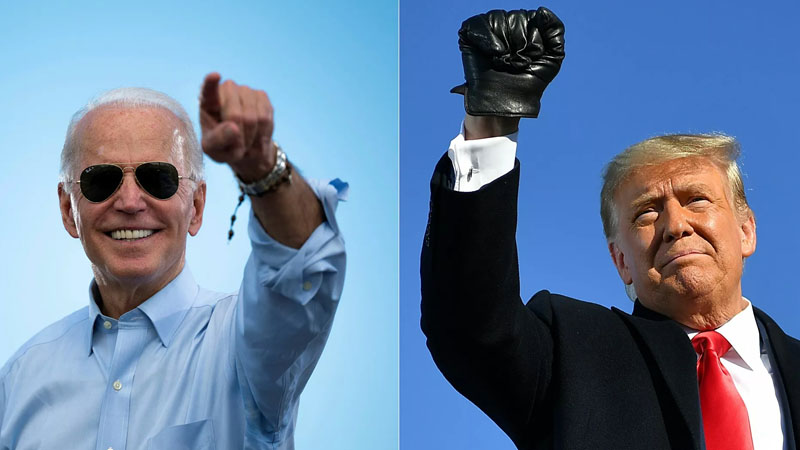 New polling figures show Donald Trump leading Joe Biden by double digits among Iowans in a hypothetical 2024 matchup, which was released a month after the former Republican president held a rally in the early voting state where he tested the presidential waters and laid the groundwork for a potential campaign.

Trump came out ahead by 11 points, drawing 51 percent of support among likely Iowa voters compared to Biden’s 40 percent, according to a new Des Moines Register/Mediacom poll released Saturday.

Another 4 percent said they would not vote for Trump or Biden, and 5 percent indicated they were unsure which candidate they would support.

Trump’s lead over Biden appears to have been largely driven by independents, with 45 percent voting for the former Republican president and 37 percent supporting the Democratic president.

Neither Biden nor Trump have officially launched a campaign for 2024, although Trump has repeatedly teased a return to the White House since leaving office.

“Trump won Iowa convincingly in 2020, and that’s reflected in these data,” said J. Ann Selzer, president of polling firm Selzer & Co., who interviewed 810 Iowa adults by telephone between November 7 and 10. “If all you had in this poll was that Trump would defeat Joe Biden by 11 points, it might say everything is locked up.”

The results come a month after Trump held a rally in Iowa, drawing thousands of supporters to his first visit back since losing the 2020 presidential election to Biden last November. In that contest, Trump won Iowa by 8.2 percent, keeping the state red by maintaining significant success in rural areas.

Biden’s approval rating continues to fade in Iowa and most national polls following a summer surge of the COVID-19 pandemic, a chaotic Afghanistan troop pullout, and Democratic in-fighting over the president’s agenda. Only 33 percent of Iowa adults said they approved of Biden’s job performance in the poll, a slight increase of 2 percent from the same poll conducted in September, and 62 percent disapproved.

Meanwhile, Trump is more popular in the state now than in the four years that he held office. According to an October Des Moines Register/Mediacom poll, about 53 percent of Iowan voters had a favorable view and 45 percent had an unfavorable view of the former president.