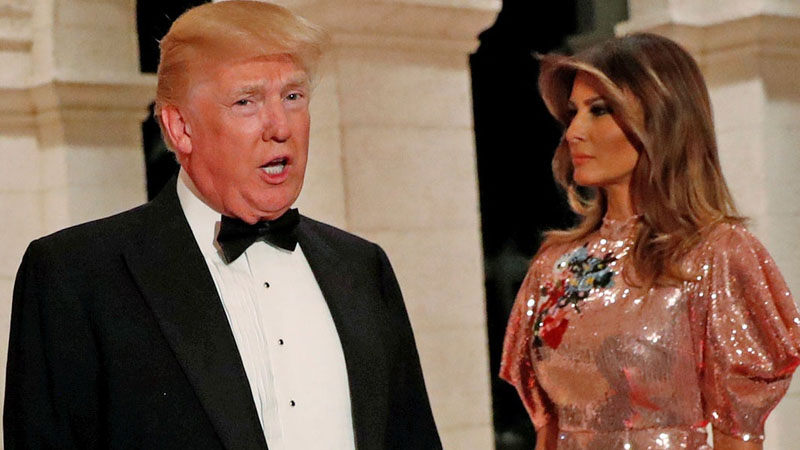 One source says about the couple: “She knows what Donald wants from her, but the rest of her life is dictated by her own interests. Each has come to respect what the other wants and needs”

Donald and Melania Trump married 17 years ago in Palm Beach, Florida, at the Episcopal Church of Bethesda-by-the-Sea, with Hillary and Bill Clinton, Kelly Ripa and Mark Consuelos, and Kathie Lee Gifford in attendance. (“It was quick but beautiful and perfect,” Simon Cowell, another guest, told PEOPLE at the time. “I give it a nine.”)

The reality TV host-turned-former president and former first lady mark their wedding anniversary on Saturday with a low-profile weekend at home in Florida, according to insiders. A lot has changed for the Trumps since their Jan. 22, 2005, nuptials.

Even as President Trump continues to make bogus charges of election fraud and play kingmaker in Republican politics, where he is still popular, they have created most of their post-White House lives at their Mar-a-Lago Club.

The family is also under investigation, though they deny any wrongdoing and claim they are being singled out.

“Both are very happy to be in Palm Beach,” a social source says about the Trumps. “Mar-a-Lago is their home and they could not be happier about that,” this source says. “They do not miss New York.”

“Donald plays golf regularly with political guys who fly down as well as with social friends from his club, and Melania keeps busy with her family, the spa at Mar-a-Lago, and her own business and philanthropic interests,” the source says.

Another source close to them says that “they will be spending the weekend at their home” and that the former first lady who largely avoided the public in the first year after leaving Washington, D.C., “is working on some exciting projects.”

Among them: an auction of NFTs, art, and clothing as well as more work with children. (“A portion of the proceeds will support children from the foster care community,” Mrs. Trump’s office has said of the auction.)

“Melania has her own fashionable interests and wants to do something with them to make money,” another source tells PEOPLE, adding, “While Melania is a quiet and low-key person, she definitely has her own attitude and does pretty much what she wants — even if others don’t get it.”

The former first couple has been spending their time in Mar-a-Lago for the past few months. They see friends for dinner at the club frequently — and are expected to dine together on their anniversary — but they usually go their separate ways and spend little time together.

The social source says that “Melania appears vibrant, happy and confident, and seems to have found her own interests away from the spotlight.”

She and the 75-year-old former president have a comfortable relationship and get along as well as two people with such dissimilar personalities at different stages of their lives.

“She makes an appearance with Donald for certain dinners, but spends much of her time with her own family,” the source says. “This is a way of life for her and she likes it, especially in Palm Beach.”

The couple’s living quarters at Mar-a-Lago have been restored and expanded to provide enough space for each of them to be comfortable.

Mrs. Trump keeps to herself in the solitude of the private club, according to a source; her “inner circle consists mainly of her sister and her parents.” She’s also quite involved with Barron, her 15-year-old son, who attends a private school nearby.

As one source says: “She knows what Donald wants from her, but the rest of her life is dictated by her own interests. Each has come to respect what the other wants and needs.”

Other issues loom as well: a source claims that, although not being charged with a crime, President Trump is concerned about a court petition by New York Attorney General Letitia James.

The newly released paper details some of the information acquired by investigators, alleging that the Trump Organization used “fraudulent or misleading valuations of its assets while seeking loans and tax savings.” (A Trump spokeswoman says James is politically motivated.)

“Don’t think he is not worried because he is,” a political source tells PEOPLE.

“Publicly, he claims his innocence, but he is hard at work with his lawyers to use every possible device to kill this and discredit the investigation,” the source says. “That is his specialty. He wants it to go away.”