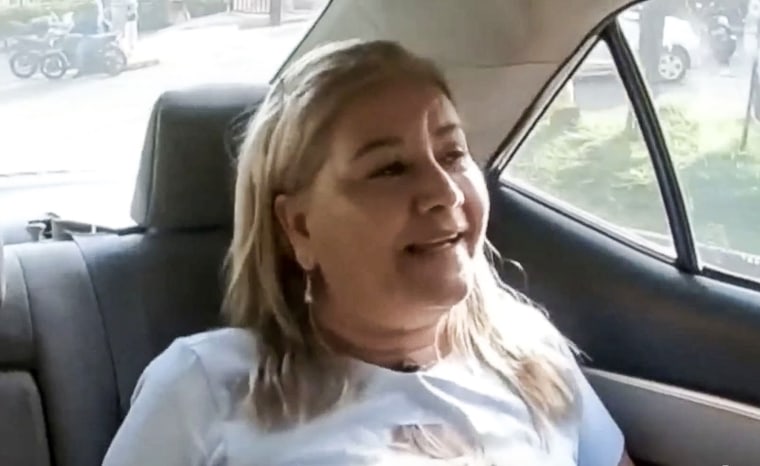 Martha Sepúlveda of Colombia, who had ALS, garnered international headlines when she sought euthanasia without an immediate terminal prognosis.

Martha Sepulveda, 51, got her to wish.

The devout Roman Catholic died by euthanasia in the presence of her family on Saturday morning in a clinic in Medellin, Colombia.

But it was a difficult road for the woman who made headlines when she asked to be allowed to die by euthanasia if she had an immediate terminal prognosis — those expected to live for six months or less — arguing that she did not want to wait for even more pain and difficulties from Amyotrophic Lateral Sclerosis (ALS), also known as Lou Gehrig’s disease, an incurable and degenerative disease.

“God does not want to see me suffer,” Sepúlveda said last fall in a television interview with Colombia’s Caracol network that went viral.

However, the clinic that approved the procedure last October canceled the euthanasia at the last minute — just 36 hours before the procedure.

Sepúlveda immediately fought back in the courts, and the judges agreed with her. “Forcing a person to prolong his existence for an indeterminate time, when he does not want to and suffers deep afflictions is equivalent to cruel and inhuman treatment,” the judge stated in his sentence.

Martha was able to choose a new date and time for her dignified death as a result of this decision, and she chose Saturday morning, Jan. 8.

“Martha left grateful to all the people who accompanied and supported her, who prayed for her and had words of love and empathy during these difficult months,” her lawyers, from the Laboratory of Economic, Social and Cultural Rights, said in a statement.

In defending the right to a dignified death, Sepulveda made history not only in her country but also in the region. The Catholic Church was firmly opposed to her. Her case went beyond borders because she spoke openly about her desire to die and the tranquility she felt like a good Catholic.

Sepúlveda’s attorneys hope her case sets a precedent. “Those who want to exercise and guarantee their right to die with dignity should not be afraid to make it public. Those who exercise their rights should never hide,” Lucas Correa Montoya, from the DescLAB team, told Noticias Telemundo.

Colombia had already taken a significant step forward in the right to a dignified death on Friday, the day before Sepulveda was euthanized. Victor Escobar, a 60-year-old Colombian transporter who had suffered from various health problems for 30 years, was euthanized in a Cali clinic. It was the first procedure of its kind for a non-terminal patient in that country and Latin America.

A smile that reverberated on many screens

Sepulveda received the news that she was allowed to undergo the procedure with great joy before her scheduled euthanasia last October was abruptly canceled and was shown celebrating with her son on television cameras with a few beers in hand. “Rest is the best thing that can happen,” she said at the time.

Sepulveda was in terrible pain as a result of her incurable disease, which gradually destroys motor neurons, and she could no longer walk or perform personal hygiene without assistance. Some ALS patients live for months or decades, but the majority die within two to five years of being diagnosed.

Sepulveda did not want to wait for that progression and suffering, and he compared God to a “father who does not want to see his children suffer.” The Catholic Church invited her to reflect, and many publicly questioned her in a country where the majority of the population is Catholic.

Her family supported her struggle, highlighting the right of each person to decide and have an independent opinion.

Colombia decriminalized euthanasia in 1997, making it a global pioneer in the right to die with dignity, but it took decades for health officials to create protocols to regulate the procedure for those with terminal illnesses.

In July of last year, the Constitutional Court expanded the right even further by eliminating the requirement for a terminal illness (a diagnosis of six months or less), the court said, claiming that “it can impose the continuation of life in conditions that the person considers unworthy or humiliating.

That was the chance Martha had been looking for. Four days after the ruling, she requested euthanasia, which was granted on Aug. 6 and scheduled for October before the clinic withdrew the request.

Martha’s denial to receive euthanasia sparked an intense legal and medical debate in Colombia, which appeared to be a complex web of judicial and legal decisions. Who makes the final decision? How is it determined that a person is severely ill?

It was a debate that cut across borders: bills to legalize euthanasia have already been introduced in Chile, Uruguay, and Argentina.

The 20th Civil Court of the Medellín Circuit settled the discussion by responding to the appeal presented by the woman’s lawyers. “The judge recognized that it is up to each person to judge and define what type of suffering he considers unworthy and incompatible with his idea of ​​dignity,” explained Lucas Correa Montoya, Sepúlveda’s lawyer.

“It is not up to doctors or public opinion, or the church, to determine who suffers more or who suffers less,” he said.

“The reaffirmation of my rights at this very complex moment in my life fills me with joy and reaffirms my confidence injustice,” Sepúlveda said in a letter published after the court’s ruling.

This past weekend, her protracted fight ended, on her own terms.