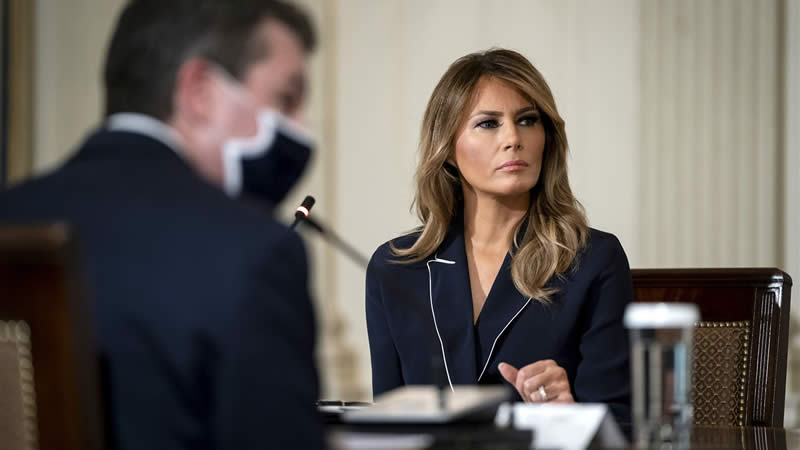 Not having it. Melania Trump appears to be going insane while former White House press secretary Stephanie Grisham continues her lucrative Donald Trump trash-talking television circuit in the midst of the various investigations the former president is at the center of.

“How can she get away with this? She is a traitor,” the former First Lady reportedly told a pal, who noted, “Melania is hurt and offended by Stephanie who she thought would act more ‘professionally’ than to run her mouth at every opportunity.”

Stephanie never gave a single media briefing while working as Donald’s press secretary. After stepping down from the position after nine months, she moved into the role of Melania’s chief of staff and was taken in with open arms.

“She has been a mainstay and true leader in the Administration from even before day one, and I know she will excel as Chief of Staff,” Melania gushed at the time.

As per Ok magazine, however, after Stephanie seemed to betray the contentious family by disclosing Donald’s alleged legal actions, Melania was left livid.

“Stephanie had a long relationship with the Trump family, and she worked as an assistant on Trump’s 2016 presidential campaign,” explained the source. “That’s what stings the most for Melania. This is someone who she thought was trustworthy and loyal.”

“Whatever the scandal is on any given day, Melania feels Stephanie pops up on television as a pundit and no matter the scenario, has a wild tale of ‘yes, I knew that’ or ‘I saw that, too,’” the insider continued. “Melania cannot understand how Stephanie is being given so much credibility.”

Stephanie apparently decided it was time to speak out about what she had allegedly witnessed after the FBI raided Donald’s Mar-a-Lago estate on Monday, August 8, as part of the investigation into his handling of presidential documents, including classified documents, that may have been brought to his Florida home.

Stephanie candidly admitted in an interview this week that the reality-star-turned-politician “did not handle classified documents properly” throughout his time as the POTUS.

“I sat in an airplane with him, watched him go through documents, throw some away, rip some up and put some in his pocket,” she recalled. “Because I remember specifically thinking: ‘Why do those go in his pocket?'”

9-Year-Old Girl Spots Something Strange Moving in Her Yard Behind the House. They Are Now Calling Her a Hero!