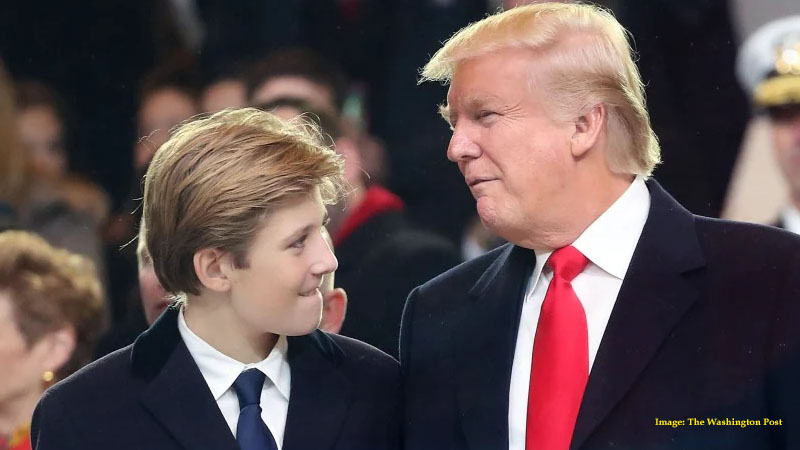 A photo of Barron Trump has stirred internet debates as it showed the youngest son of former US President Donald Trump after several years of being away from the press.

Barron Trump, 16, was seen smiling with an older woman at what appeared to be a fancy dinner event, wearing a black suit and raising his thumb in a style similar to that of his father.

The internet, on the other hand, went crazy about the teen’s height, with people arguing how much he’s grown in recent years and whether he’s Donald Trump’s biological son.

While many online comments criticized Barron Trump’s height, implying that he should pursue a basketball career, others deleted “insulting” tweets, claiming that the youngest Trump is a teenager who should not be subjected to online bullying because of his look.

Meanwhile, other users were trying to connect Barron Trump’s height, which is said to be around 2 meters, with his other father and siblings.

One poster claimed to have a photo of one of Barron’s uncles on his mother’s side, claiming that he is the same height as Barron.

Other Twitter users shared previous photos of Donald Trump that show a strong resemblance to his youngest son now, asking other users to avoid making rude comments about Barron Trump because “he is still a child.”

Melania Trump spoke out against cyberbullying in 2017, noting incidents in which her only son, Barron, was attacked during his father’s first year in office.

At the time, internet attacks on Barron Trump and his adult siblings had caused some prominent people, including Chelsea Clinton, the only daughter of Trump’s political rival, Hillary Clinton, to speak out against online bullying.

In reaction to media attacks that had named the then-11-year-old kid, Chelsea Clinton encouraged the US media to “leave Barron Trump alone” and “let him have the private childhood he deserves” in a 2017 tweet.