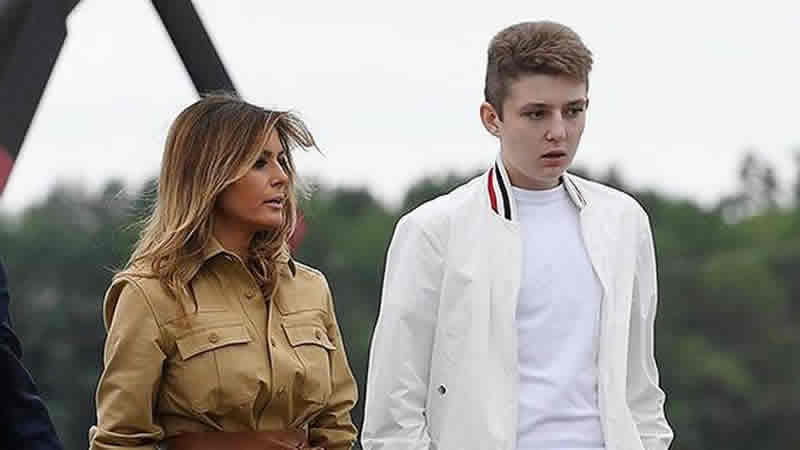 Barron Trump was literally towering over his super model mother as the pair were spotted in NYC on Wednesday, July 7.

Barron Trump, 15, has grown so much! The teenager was spotted with mom Melania Trump, 51, as the pair left their home at the Trump Tower on Wednesday, July 7. He looked older and more mature with his longer, grown out hair which had a slight wave to it as he towered over his mom. The teenager kept his outfit classic with a navy blue long sleeve and matching dark jean, accessorizing with a black, silver buckle belt and a limited edition orange Louis Vuitton duffle bag. The mother-son duo were seen getting into a vehicle after departing the building — see the photos her via Daily Mail.

Melania was also stylish for the outing, wearing a button down black blouse and white pants. Like Barron, she carried a designer bag — although, a much more expensive one: Melania held onto a black leather Hermès Birkin bag with gold hardware, worth about $11,000. She finished her runway-ready ensemble with Christian Louboutin’s white, pointy leather flats (worth $675). Her highlighted hair looked freshly blown out into a loose curl as she made her brief appearance, keeping her face hidden behind an oversized pair of black sunglasses.

Height certainly runs in Barron’s blood, who is now apparently 6 foot 7 inches: dad Donald Trump is a towering 6 foot 3 inches, while mom Melania — who had a career as a model prior to her marriage to The Apprentice star — is 5 foot 11 inches. His older siblings are also tall: brother Donald Jr. is 6 foot 1 inch, Ivanka (who has also modeled) is 5 foot 11 inches, and sister Tiffany is 5 foot 8 inches. There’s no telling if this is Barron’s final growth spurt, but he certainly appears to keep growing every time he steps out.

Back in Jan. 2020, the then 13-year-old was a full head taller than his father as the pair prepared to board Air Force One. Wearing a casual green bomber jacket and black pants, Barron walked behind his parents on the White House lawn. At the time, Barron was estimated to be about 6 foot 3 inches — so already a bit taller than his dad — meaning he’s grown a whopping four inches in just a year and a half. While Barron has yet to discuss his future ambitions or goals, a modeling career wouldn’t be out of the question with that height.

The health impacts of pandemics have already begun. What are our choices now?