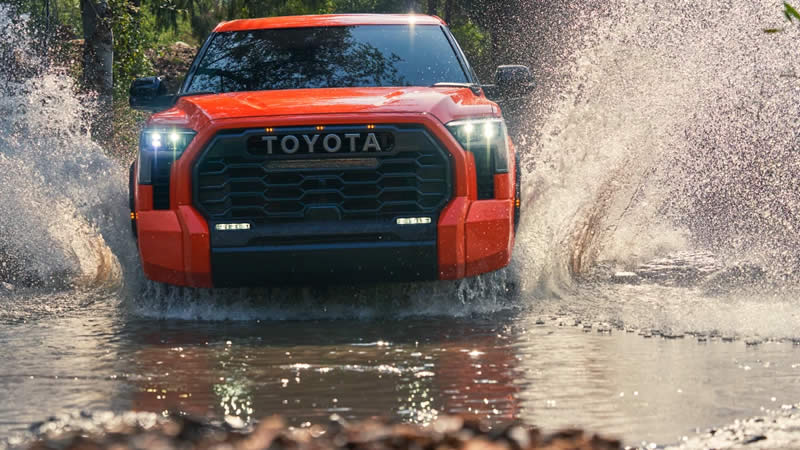 The stars align in Toyota’s second Big Game ad, “The Joneses,” as Tommy Lee Jones, Leslie Jones, Rashida Jones, and Nick Jonas try to keep up alongside the biggest star of them all, the all-new 2022 Toyota Tundra.

The all-new 2022 Toyota Tundra has been years in the making and you only get one chance to make a first impression” said Lisa Materazzo, group vice president, Toyota Marketing, Toyota Motor North America. “It’s only fitting that we launch the all-new Tundra, our biggest U.S. campaign launch ever, alongside this caliber of star power on the world’s largest advertising stage.”

The 60-second ad, which premiered at the start of the Toyota Halftime Report, opens with two all-new Tundras racing through the countryside on an off-road expedition. The drivers are revealed to be none other than Tommy Lee Jones and Leslie Jones. Suddenly, another all-new Tundra pulls out of nowhere – it’s Rashida Jones – overtaking them as the three-barrel through the mud, snow, and mountains in a heart-pounding rivalry.

They peer over at each other, a glint of challenge in their eyes as a fourth Tundra joins the group – all perplexed as to who it could be. The truck pulls up revealing Nick Jonas behind the wheel. With the group’s reluctant approval, Nick joins in as the voice-over reads “stay ahead in the all-new Tundra.”

“The Joneses” was created by Toyota’s agency of record, Saatchi & Saatchi, and directed by veteran filmmaker Bryan Buckley.

“I’ve directed many Big Game commercials,” said two-time Academy Award-nominated director Bryan Buckley. “Each shoot brings its own excitement, but the star power of the actors and the all-new 2022 Toyota Tundra took it to an epic level.”

Viewers who tuned into the Big Game on Telemundo were treated to “Born to Lend a Hand” at the start of the Toyota Halftime Report, a 60-second spot featuring the all-new Tundra created by Conill Advertising and directed by Nicolai Fuglsig.

Toyota’s previously-released Big Game 60-second spot “Brothers” shares an inspiring message of determination and spotlights the power of sport by profiling real-life brothers, Brian and Robin McKeever. The cross-country skiing pair have together earned 10 Paralympic medals. “Brothers” ran in the 1A position of the Big Game. “Brothers” was created by Saatchi & Saatchi, in partnership with Dentsu, and directed by Seb Edwards.