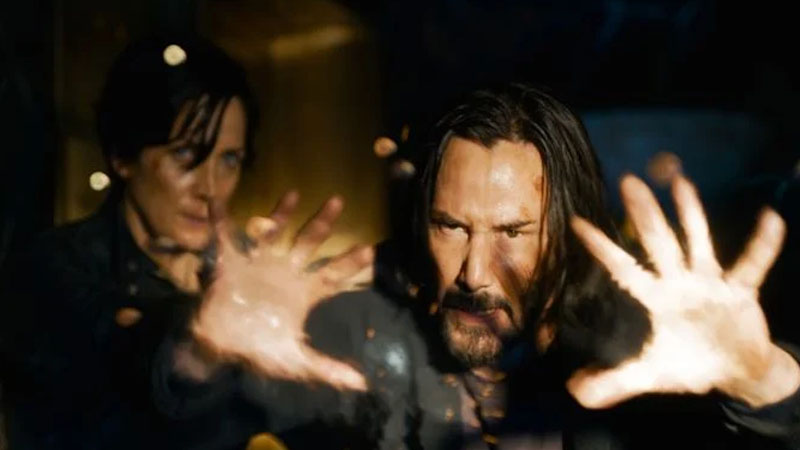 With The Wachowskis’ blockbuster, The Matrix in 1999, the science fiction genre was forever transformed. That ground-breaking property expanded into a trilogy, which has subsequently influenced many blockbusters. Director Lana Wachowski recently shared Keanu Reeves’ response to the final cut of The Matrix Resurrections, which will bring the property back to theatres.

When The Matrix 4 was announced, fans were thrilled when they learned that the dynamic duo of Keanu Reeves and Carrie-Anne Moss would reprise their roles. Despite their characters’ deaths in Revolutions, Neo and Trinity were seen kicking ass and taking names in the recently released teaser. Lana Wachowski’s highly awaited sequel is just a few months away, and she has explained Reeves’ response after seeing The Matrix Resurrections.

As she stated, “We showed the film to Keanu, and he really was blown away by it, and he said something that was typically Keanu, where it’s incredibly insightful. And he’s just sort of sitting there, and you don’t expect some incredible revelation to come out of him at that moment, like casual brilliance just kind of rolls off of Keanu. And he was just sitting there, and he goes, ‘Twenty years ago you told a story in which you described the coming twenty years and the problems of the nature of digital, virtual life and how it was going to impact us and how we think about it, and gave us a frame to be able to think about it and talk about it. And you took the same character and the same stories and the same stuff, and somehow you made it about the next twenty years.’ And he was like, ‘How did you do that?’”

As if Keanu Reeves needed any more reasons to be adored. The 57-year-old actor is adored for both his performances in projects like John Wick and his energetic character. And Lana Wachowski’s most recent story about The Matrix Resurrections certainly makes him look like a delightful collaborator.

Lana Wachowski’s account of Keanu Reeves’ recent appearance at the Berlin International Literature Festival sure to heighten interest in The Matrix Resurrections. The project is not only finished but it has also been screened for the likes of Keanu Reeves. And Reeves appears to believe that Wachowski managed to strike lightning twice. We’ll just have to see what larger messages she’s sending once the mysterious sequel hits theaters this December.

The Matrix Resurrections’ debut trailer essentially broke the internet. While there was some exciting footage, almost nothing about the plot of the film has been released.

According to Cinemablend, the original Matrix trilogy, as Keanu Reeves pointed out, was an allegory about our future reliance on technology. That absolutely came to pass, so it’ll be interesting to see what kind of prophecy Lana Wachowski brings to The Matrix Resurrections. It’s obvious that it’s for Keanu Reeves’ approval.

The Matrix Resurrections will be released in theaters on 22nd December.