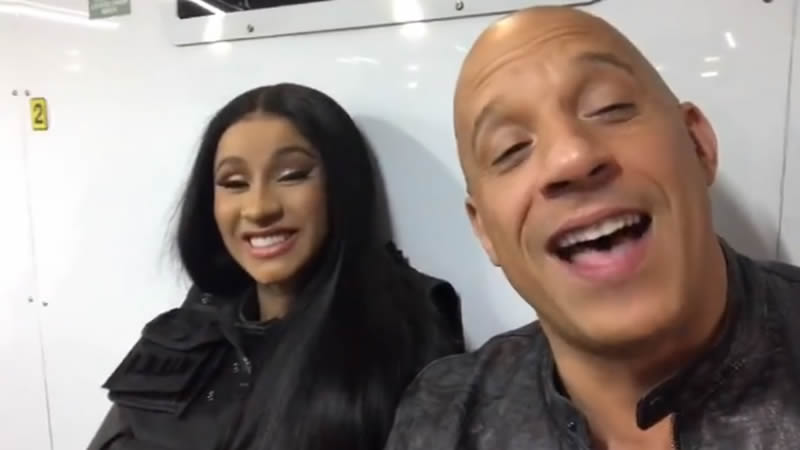 Cardi B reveals that she was initially “scared” of working with Vin Diesel on F9, in which she portrays Leysa, but that he turned out to be “so dope.”

Cardi B was initially apprehensive about working with Vin Diesel in fast and furious 9. F9, the tenth film in the Fast & Furious franchise, was released on June 25. Dom Toretto’s peace and quiet are broken as his brother teams up with former enemy Cipher to hunt him down in the film directed by Justin Lin. Vin Diesel, Michelle Rodriguez, Jordana Brewster, Tyrese Gibson, Kurt Russell, Charlize Theron, Helen Mirren, Michael Rooker, Ludacris, and John Cena feature in the film.

Cardi B chart-topping hits include “Up,” “WAP,” and “I Like It”. She makes a cameo appearance in the movie. Dom’s old buddy Leysa, who he probably met while in the Dominican Republic, is played by Cardi B. At Otto’s reception at Hatfield House in London, she sees him again. When Interpol arrests Dom at the party, it turns out to be a deception set up by Leysa and her team to aid him in his escape.
Cardi B’s appearance in Fast and Furious 9 was planned since Vin Diesel’s daughter is a huge fan of hers.

That didn’t stop her from being exceedingly apprehensive about working with him. Cardi B told People that she was “scared” of him because he “always plays this serious guy.” When she met him, though, she discovered he was “so nice, so dope.” Here’s the complete quote:

You know Vin Diesel, he always plays this very serious guy. I was scared, but he’s so nice, so dope, he makes you feel so comfortable, that’s pretty cool.

It’s a testament to Vin Diesel’s intimidating presence that even Cardi B, who is known for her self-confidence, was nervous. However, it appears that he is aware of the impression he makes on others, thus going to such lengths to make her feel at ease was a good decision. His involvement in the decision to bring Cardi B on in the first place demonstrates how committed he is to the franchise’s inner workings, which he has been a part of for the past 20 years.

As per Screenrant, Cardi B has previously been in Lorene Scafaria’s Hustlers in 2019, so she was understandably nervous to be working with a macho megastar. It won’t be her last, either. Cardi B has been cast as the lead in the upcoming comedy Assisted Living, and she has been confirmed to return in Fast and Furious 10.

Cardi B is used to being in front of the camera, having started her career on the VH1 reality show Love and Hip Hop: New York, and it will be interesting to see if F9 and her subsequent films can propel her career in a new way.