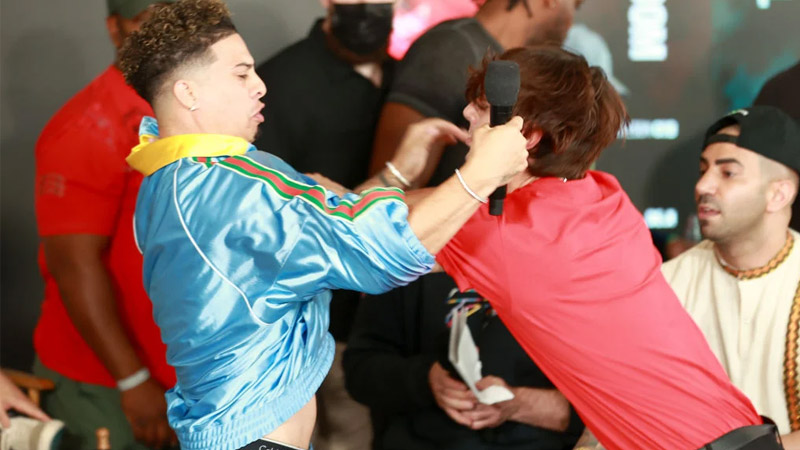 On May 18, Austin McBroom and Bryce Hall got into a fight during YouTube vs TikTok press conference. Here’s a look at Twitter users reacted to it.

Austin and Bryce are set to fight each other on June 12. The pair came together for a press conference, but things did not go as planned. Bryce and Austin got into a fight minutes after the press conference started. The video from the event has gone viral on Twitter and people can’t stop reacting to it.

WHAT HAPPENED AT YOUTUBE VS TIKTOK PRESS CONFERENCE?
The fight between Bryce and Austin started when the two sat down together to talk about their upcoming fight. Before people realized, Austin and Bryce were seen fighting each other.

With both of them taking the fight to the floor, several other people had to interfere to stop the fight from getting out of hand. Austin even took to Twitter to throw a jab at Bryce for the way he fought.

Austin wrote: “Come to find out @brycehall is as strong as my 10-month-old baby boy. Steel boy you wanna fight him instead of me.” Bryce didn’t hold back and decided to respond as well.

Bryce wrote: “Glad your security was there to push me off of you ! after I’m done with you I got a better fight next so I’m not worried.” In fact, Bryce even challenged fellow YouTuber KSI to come and fight him.

On the other hand, Austin’s wife Catherine Paiz had expected things to get out of hand at the event. After the video from the press conference went viral, Catherine tweeted: “and that’s why I didn’t go.”

TWITTER REACTS TO BRYCE HALL AND AUSTIN MCBROOM FIGHT
Fans were quick to react to the fight that took place between Bryce and Austin. Some did not shy away from bringing Bryce’s ex, Addison Rae’s recent kiss with Tanner Buchanan while poking one of the TikTok star.

One user wrote: “Me watching Bryce Hall starting a fight but ending up becoming a meme by eating the floor.” Another added: “Bryce Hall got dropped LMAOOOO” while sharing the video from the event.

“Bryce hall starting a fight and then ending up on the floor,” another joked. “Bryce Hall getting used to being dropped. The guy just recently got dropped by Addison Rae as well,” said another.