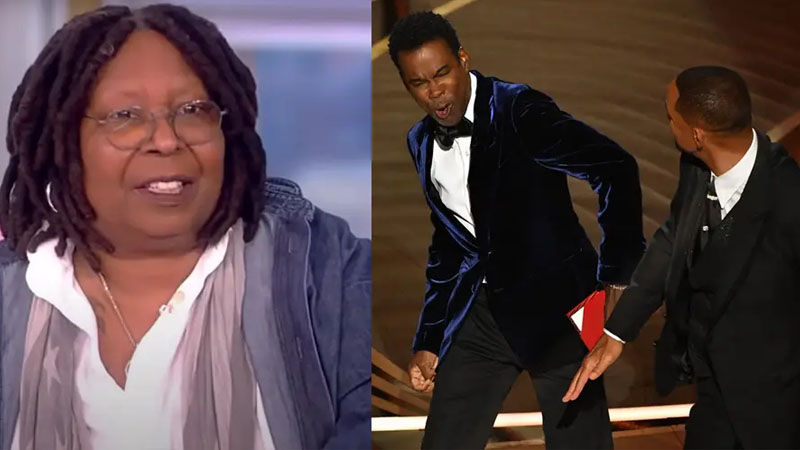 Will Smith will ‘be fine’ according to Whoopi Goldberg after she discusses his Oscars outburst on the US talk show The View.

Will Smith‘s shocking slap on Chris Rock at the Oscars last week, according to Whoopi Goldberg, will have no impact on his great career.

The 66-year-old host and Academy governor had previously spoken out against the incident, stating that Will’s first-ever Oscar would not be revoked.

And now, speaking on The View, she has admitted that she does not feel his outburst would have an impact on her already-famous career.

Whoopi Goldberg appeared to roll her eyes when she asked the set-up question for the Hot Topic discussion on the i-Robot actor’s career as she read from the autocue.

She said: “Some of Will Smith’s future projects are in question. The question is does he have a path back?”

Whoopi had a giggle at her own question and quickly answered it herself saying: “Yes, of course, he does. He’ll be fine. He’ll be back. No worries.”

The panel chose to rapidly move on from the topic because it appeared to be old news to them.

Co-host on the show, Ana Navarro, added: “I’m so tired of talking about this I’d like to slap myself.”

She continued: “He’s had over 30 years of a career where he’s had a very positive image, been a positive role model, he’s been very philanthropic, he’s done all sorts of things. None of us should be judged by our worst moment.”

A lot of movies featuring the Fresh Prince of Bel-Air actor are expected to be canceled as a result of his behavior, according to reports.

Onlookers were stunned when the 53-year-old stormed the Academy Awards stage and smacked Chris Rock after the comedian made an ill-advised joke about the actor’s wife, Jada Pinkett-Smith.

He then bellowed: “Keep my wife’s name out your f***ing mouth!” while the astonished A-List audience watched on in shock.

Despite Will’s recent apologies, The Hollywood Reporter reported last week that a Netflix film called Fast and Loose, which was set to star Will, had been canceled owing to the scandal.

Will’s other Netflix projects, The Council and Bright 2, may also be canceled as a result of his outburst, according to TMZ.

The fourth installment of Bad Boys, which was in active development at Sony and Will had “received 40 pages of the script prior to the Oscars,” has now been delayed as Will continues to feel the consequences of his violent actions, according to reports.

Jennifer Lopez refuses to wear her engagement ring after calling off her wedding: Rumor