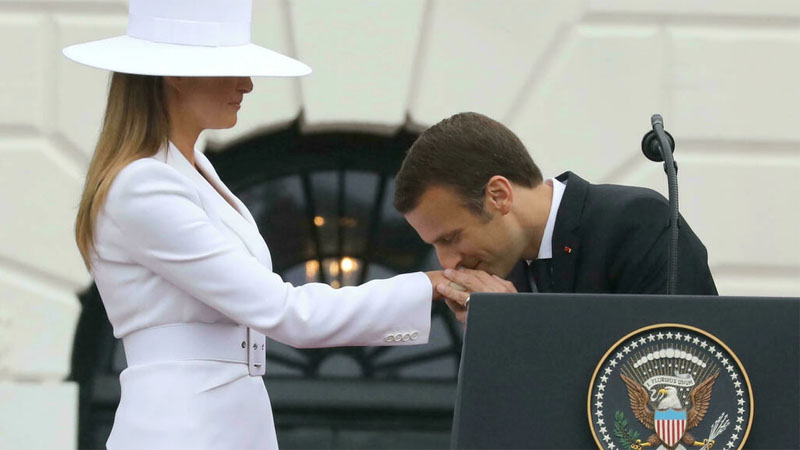 Melania Trump hopes to raise at least $250,000 in a “historic auction” by selling things such as a white bonnet and digital and watercolor drawings of her.

Trump’s online auction, branded the “Head of State Collection,” will begin on Tuesday, according to the former first lady’s office. The winning bidder will receive “three important one-of-a-kinds signed items” commemorating French President Emmanuel Macron and his wife Brigitte Macron’s visit to the White House in 2018.

Designer Hervé Pierre produced the white broad-brimmed hat that is being auctioned to match Trump’s Michael Kors outfit that he wore while greeting the Macrons.

“Mrs. Trump recognized this important moment for the country, and accordingly, a great deal of consideration went into the planning,” according to a promotional site for the auction.

An original watercolor painting by Marc-Antoine Coulon depicting Trump in his 2018 state visit look is also up for auction.

A similar image from Coulon is featured in the digital artwork being auctioned, with “subtle movement.”

As per Thehill, the auction’s start comes weeks after Trump announced she would be selling nonfungible tokens, or NFTs, at regular intervals, in an extraordinary, if not unprecedented action by a former first lady. “Melania’s Vision,” the inaugural NFT, contained a painting of the 51-year-old ex-model’s eyes by Coulon, as well as an audio message.

A portion of the auction’s proceeds will help provide “individuals who have been in the foster care community with access to computer science and technology education,” Trump’s office said in a statement.

A representative for Trump’s Be Best foster care effort did not immediately reply to ITK’s request for comment on how much of the money would go toward it.

Trump’s auction will run through January 25.

What are the symptoms of Omicron? Here’s how they differ in vaccinated and unvaccinated patients