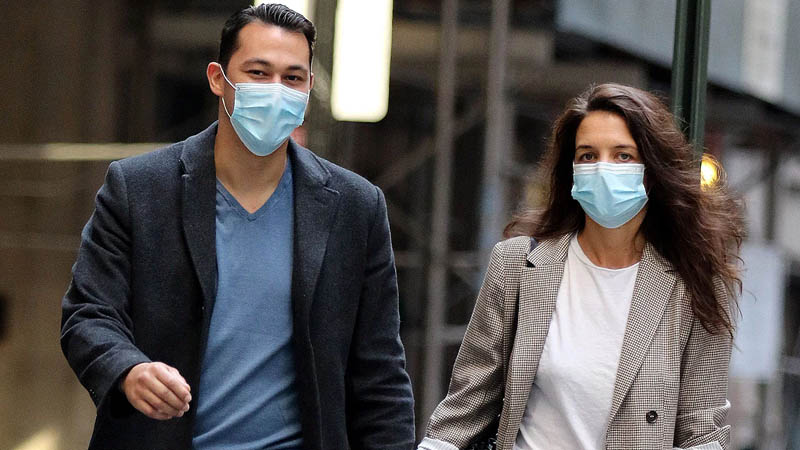 OK! believes that the Dawson’s Creek star “didn’t waste any time” in tying the knot with Vitolo. The two have only recently begun dating, and an insider tells the tabloid that the two have already eloped “just one month after the PDA-loving pair was first spotted canoodling over dinner at his family’s NYC eatery in September.” The “fiercely private” Holmes got married “in an intimate courthouse ceremony” with Vitolo’s father as a witness.

“Katie wore her hair loose, a summery dress with a stylish jacket and high heels,” the insider said, who added that Holmes “always thought it would be so romantic to elope – and it was.” The Batman Begins star isn’t stopping with a hasty marriage though, as the tabloid says “hopes to get pregnant by Christmas at the latest.” As the couple enjoys their secret marriage, “only [telling] a few friends because they want to keep it to themselves just a while longer,” the article ends on a happy note by saying Holmes has “never been happier.”

How Would The Tabloid Know This?

This story relies entirely on the testimony of sources who know far too much information. If Holmes is only telling “a few friends,” then that means this theoretical secret wedding is only known to her absolute closest friends. This tabloid did get one thing right, and that was calling Holmes “fiercely private.” OK! wants you to believe that an extremely close friend of Holmes would violate her secret and talk to this tabloid?

Gossip Cop simply doesn’t buy that this story is true as there’s been no other report about a Holmes marriage No other outlet has any story about this wedding. Even the Daily Mail, which isn’t exactly known for its tact or patience, recently ran a story about the two going shopping but never once hinted that the two are actually secretly married.

Another reason to be sceptical of OK! is that it has a rough track record when it comes to stories about the Phone Booth star. It said Holmes was going to do a tell-all interview, an extremely common tabloid story which, surprise surprise, never occurred. It also said Holmes was dating Bradley Cooper, she wasn’t, and that she would leave New York City for Los Angeles, but she didn’t. Whatever insight this tabloid pretends to have is completely made-up, as it consistently prints nothing but bogus stories.