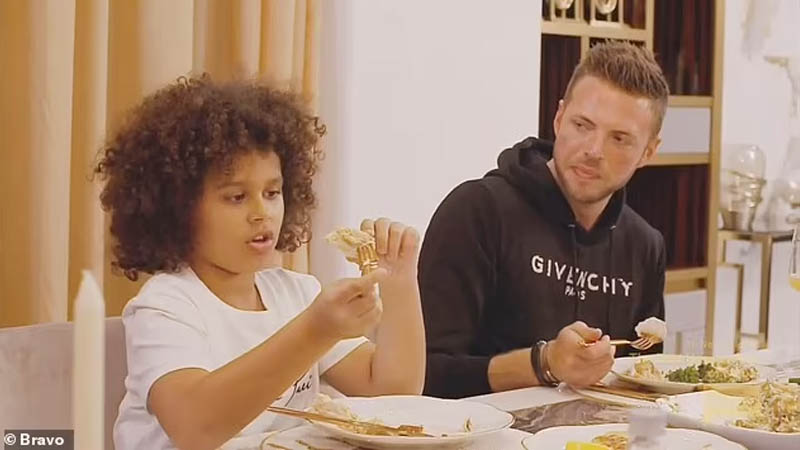 On Wednesday’s episode of The Real Housewives of Dubai, Caroline Brooks yelled at her childhood friend Brian during dinner because he had gotten on her nerves.

In the first season episode titled Dinner On The Rocks, the 36-year-old reality star became angry and yelled at the family dinner table, as per Daily Mail.

After her nine-year-old son Adam left the table while Caroline was hosting dinner at her “weekend house” for her Boston friends and Sara Al Madani, Caroline lost her calm.

Sara at the start of the meal asked Adam what he wanted to be when he grows up and he replied, ‘I have absolutely no idea.’

‘But, sweetie, what kind of job are you gonna get, so you can buy me a new Ferrari every year?,’ Caroline said.

Adam was then scolded by Caroline for holding his knife improperly while attempting to eat his chicken.

‘Is mommy a little crazy?,’ Brian asked him.

‘Like, a two out of 10,’ Adam said after Caroline urged him to be honest.

Sara said boarding school was for parents who don’t have time for their children.

‘I have a lot of friends who went to boarding school. Seventy percent of them are emotionally closed,’ Sara said.

Sara earlier told Caroline that she should be tucking Adam into bed instead of the housekeeper.

‘You need to be closer with him,’ Sara told Caroline.

‘I’m tough in certain instances. My child putting his fingers into his plate, never gonna f***in’ happen in front of me,’ Caroline said.

Brian said that Caroline was a little ‘cold-hearted’ and that her mother was ’embracing’.

‘No. My mother was very militant. You were not in my house, okay?’ Caroline told Brian.

Brian then said that he sided with Sara.

‘I think hanging around Sara will be beneficial,’ Brian said.

‘Brian shut the f*** up. Honestly, you’re getting on my nerves at this point,’ Caroline said. ‘You’re being stupid.’

‘No need to fight,’ Sara said.

‘No, because he actually thinks he’s being funny. Stop ’cause I’m gonna curse you out in front of everybody and embarrass you. Shut up,’ Caroline said.

‘No, no, no need to speak to each other like that,’ Sara said.

Then Caroline accused Sara of making “snarky remarks” about showing more affection to her son.

Caroline shouted at Brian to stop talking during his interruption.

‘You should not talk to each other like that,’ Sara said.

‘He should know better. He’s my friend from childhood,’ Caroline said.

‘Exactly. So, treat me with respect,’ Brian said.

‘No, no, you treat me with respect in my own house!’ Caroline hollered.

As part of her duties as a brand ambassador, Caroline welcomed her parents who were traveling to Dubai for her wedding while simultaneously promoting The Raffles Hotel.

‘As an ambassador for a hotel, your job is to obviously post about the hotel, show all the amenities, show how amazing the inside of the hotel is. It’s like a dream job,’ Caroline said in a confessional.

While providing a tour of their four rooms, which included a spa, Caroline and Sergio took in the view of the location of their wedding.

Because their parents were present, Caroline declined his offer to have sex.

‘Baby, have you seen the size of this place? They will not even, like, hear anything. We have to do that. It’s a tradition previous to the wedding,’ Sergio said.

‘It’s not the night before,’ Caroline reminded him.

In a confessional, she claimed that Sergio, who is 27 years old, is constantly thinking about tiki-tiki, their slang for sex.

In addition, Lesa Milan, Nina Ali, and Chanel Ayan joined Caroline for “high tea,” where they discussed their recent argument with Caroline.

For their outdoor lunch, Chanel wore a crazy red feather dress and revealed that she had previously been engaged to be married to her cousin.

Everyone was asked to step up and make an effort to improve their character, help others, and identify as a “global citizen.”

During the episode, Nina also coped with her father’s hospitalization.

She broke down in tears as she confided in Chanel and revealed that she was under pressure from her family.

‘I try my best to be strong for everyone,’ Nina said during a Cove Beach party hosted by Caroline Brooks.

Brooks in a confessional gushed abut her friends from Boston.

‘Brian and Adam are my families. From the day that we met, we just automatically clicked. Brian is my, like, everything. When my ex-husband couldn’t be there for the delivery of my child, Brian was there. Brian cut the umbilical cord,’ Brooks said.

Brooks revealed that Brian and Adam always have been nervous about coming to Dubai ‘because of what they’ve heard in regards to the rules of being gay.

‘Ninety-five percent of my friends are queer,’ Chanel said in a confessional.

‘There are plenty of gay people here. Maybe it’s not like New York where they go around holding hands and kissing everywhere. We don’t have that,’ Stanbury said in a confessional.

‘Most of the misconceptions that they heard are not exactly true,’ Brooks said.

The Real Housewives Of Dubai will return next week on Bravo.

Why We Should Stop Using Bleach In Your Home Immediately?