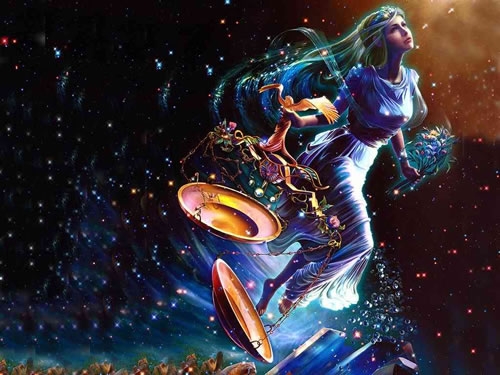 While an opposition between home and professional forces once more brought any work/life balance issues to a head over the weekend, something has shifted and you’re now able to see this more as an advantage than a disadvantage. It comes down to having the right balance, but now there is an extra incentive to get it right. The game changer was Venus’ return to your work sector last week and the chance this gives you to not only open new doors or explore new options on the work front, but the clearer sense of knowing what you do and don’t want. The Moon’s return to your income sector in the early days of the week will not only give you a nose for money but will act as a link between professional forces, putting your income, work and business objectives on the same page.

While last week’s Full Moon in your business sector was not enough on its own to break a professional drought or lull, it was the first sign that something is rumbling and starting to stir back into life. By the time the Moon comes full circle and forms a second Full Moon on the 21st August everything will have changed. You have had no planetary activity in either of your professional houses since February and more importantly nothing to channel a lot of pent up momentum on the income front. Yet just days before next month’s Full Moon Venus will return to open new doors on the work front, with last week’s Full Moon having already given things a nudge in the right direction or triggered things behind the scenes that might not fully reveal themselves for a few more weeks.

Your biggest challenge right now is appreciating a need to pace yourself and believing that while it may be happening in slow motion, that a major turnaround is underway. By the time you move into the new week it has only been 3 weeks since Saturn turned direct in your work sector, and with a planet that is giving you the power to move mountains if you have to barely moving at a crawl, this is not something you need to rush. In fact, if there is any work pressure or tension this week it could be that you’re trying to push things or you’re expecting too much, especially from yourself. This buys you time to focus more on the money, but also on lining up your work, income and business objectives, for it is more important than ever that they’re on the same page.

Moving into the week with the Moon in your business sector is always an advantage, for while he’ll leave on Monday, like a bell that can’t be unrung this will give you an edge you’ll retain all week. Yet as the Moon’s first visit since Uranus turned retrograde less than 2 weeks earlier, as well as a chance to tap into your professional instincts and the Eureka moments this is bound to trigger, this is your first real sense of what a change in the currents has meant. In order to turn retrograde Uranus had to come to a standstill, so this will give you an intuitive read on anything that has been stalled or stuck. This also comes just as the Sun is spending his first full week in your income sector, with a chance to put your professional and income objectives on the same page.

While Pluto, planet of change and revolution has been in your work sector from 2008 and won’t leave until 2024 and he will be challenged annually, always at this time of year, the only real challenge he’ll face is an opposition from Jupiter and while this will come to a head next week, this is already making its presence felt. Yet while this might be creating work tension, this is more a challenge to let go of the situations, ideas or even a mindset or belief that might be holding you back. The pressure is coming from lucky Jupiter so there is a need to trust that it is new growth and new opportunities trying to breakthrough, but it is being driven from within by the way that you look at things, rather than any actual situation. A change of mind has the power to change your reality.

While last week’s Full Moon in your work sector brought a reminder that while a massive professional surge has run its course that this is far from the end of the story. Until the Moon returns to your business sector on Thursday, making his first visit since Mars not only left 18 days earlier but wrapped up 15 months of continuous planetary activity, you haven’t even begun to process all that has transpired since April 2013. As the Moon returns and your professional instincts kick in expect things to start to fall into place, but this also has the power to trigger anything already at a tipping point. With new doors opening on the income front in just a few weeks time and a second Full Moon in your work sector just a few days later, this is still a work in progress.

In his last full week in your business sector Mercury is finally starting to bring his epic visit to a close. Normally here for just 2 weeks, by the time Mercury leaves next week he’ll wrap up a 10 week visit, one that has given you the intellectually savvy edge needed to welcome in a powerful new professional chapter. Until Mars leaves your business sector at the end of August you are still bringing things up to speed, but after the Sun’s departure you’re a lot more aware of what you’re working towards. The Moon’s return to your business sector over the weekend will ensure that as you reach an important time for making choices, decisions and plans that your professional instincts are sharp. This will also help with any work/life balance or time management issues, allowing you to work smarter.

Things can and do change and after a fairly bumpy week last week things are not only settling down this week, but you’re likely to have a much clearer sense of where things stand on both the work and business fronts. It was last week’s Full Moon, just hours after the Sun returned to your business sector that brought any work/life balance issues to a head, issues that would have plagued you for most of last week. This may have brought some professional wakeup calls as well and with Uranus in his early days in retrograde motion in your work sector, a sense that things weren’t going that well. Moving into the week with the Moon in your work sector not only gives you a better sense of what this has opened the door to, but as the fog of war clears how many professional options you have.

While things had gone off the boil professionally or had reached a point where you were simply coasting, Venus is already shaking things up. Venus will only spend 25 days in your business sector, updating your professional desires and expectations, but it’s her interactions with the other planets in the solar system that is bringing things up to speed fairly quickly. As well as challenging old excuses, Venus is building a strong working relationship with Pluto, who in retrograde motion in your income sector is coming under pressure. Venus knows a thing or two about money, so she’ll be working to turn this into motivation and a new sense of resolve, both financially and professionally. Move into the week with your finger on the pulse and ear to the ground, trusting your heart and instincts.

In the scheme of things a professional lull that is only entering its third week is short lived and with new doors opening on the business front in just a few weeks time this gives you a chance to work with what is already on the table. It’s on the work front that you have a chance to tie up loose ends, with a lot of things likely to fall into place this week. Where you may move into the week feeling that things are still up in the air, you’ll end the week with a sense of resolve, a better understanding of where you’ve been and of where to from here. This is thanks to the Moon’s return to your work sector on Thursday, his first since Mars left and 15 months of planetary activity ran its course and the intuitive edge this gives you. This could act as a fairly significant trigger.

While your long term business objectives are just that, a long term focus and more about the journey, with staying on course and remaining committed the way to go, on the work front things are a lot more urgent and active. Having Mars, warrior planet of the cosmos in your work sector was always going to make these some of the busiest weeks of the year, with a current frenetic pace not running its course until the end of August, but even more so since he’s charged with getting your most expansive year on the work front in over a decade up to speed. So far the only thing holding things in check has been Mercury’s intellectually savvy edge, making it is easier to work smarter; but due to leave next week and the pace about to pick up it’s more important than ever to remain mentally focused.

After a rough start to his annual visit to your work sector, things are going much better for the Sun this week. Having a Full Moon just hours after the Sun returned to your work sector last week gave you little time to prepare for the challenges that will come at some point during this annual review. However, this managed to get a lot of things out in the open before the Sun even really began his annual review of your work options, situation and matters, allowing you to clear the air and put things on the table that might otherwise have taken weeks to get to the bottom of. With both a New Moon and Mercury returning next week, this brings a chance to let the dust settle, the fog of war to clear and gain some perspective first, not only on the work front but on the income front as well. – astrolis

Business Horoscope May 13 to May 19