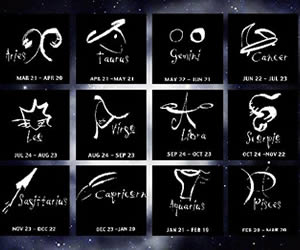 Good intentions to keep your professional hat off over Christmas will always be thwarted, with the Sun always returning to your career sector just before Christmas and staying on through the New Year, just when others are taking their professional hats off you’re putting it on. Yet this year, rather than suddenly bringing the focus onto your professional game the Sun’s return will actually dial things back, or it least it will once Mars leaves your career sector on Boxing Day. It’s the Sun’s reality checks that will take away the urgency and help package some of the professional passions and fighting spirit Mars has been evoking since mid November, taming things down. Whether working through or taking time off over the holidays use this to set your professional resolutions for 2013.

Over the last 5 weeks you’ve had a chance to take your professional hat off, for the first time in 18 years, with 1994 the last time you moved into Christmas week with no planetary activity in either of your professional houses. However that won’t be the case by the end of the week, with Mars’ return to your career sector on Boxing Day ending a short professional drought. Yet the break has given you a chance to catch your breath before new doors open. The reason why things have been active on both the work and career fronts for so many years is that you’ve had slower, outer moving planets there, which sees things limp along for years. When Mars and his professional passions and fighting spirit kick in he’ll want speed and action, kicking off a fast and furious 2 months on the career front.

While you may get away with taking your work hat off during Christmas week, in terms of stepping away from the coal face and taking a break from the day to day practicalities of your job, the chances of taking your professional hat off completely are little to none. For the first time in your lifetime you’re moving into Christmas and the New Year with Neptune in your career sector and the first time in your lifetime that you’ve had both Saturn and the North Node in your work sector at the same time, giving you the power to move mountains if you have to. Yet all those forces will remain in play throughout 2013 and well into the future, making this less about anything that requires your urgent attention and more about taking time out to mull over your options, especially for 2013.

While the Sun left your work sector over the weekend you won’t get a chance to take your work hat off, in spirit anyway. For the first time in 8 years Venus and Mercury are still in your work sector and won’t be leaving until the New Year and when the Moon left your career sector on Sunday, as well as leaving you with your professional instincts sharpened, some valuable clues, hunches and Eureka moments this also revealed the full extent of the professional turnaround that has just occurred. Just when you should be hanging your professional hat up on the hook for the year it’s still likely to be firmly on your head. Whether working through or on holiday no one would guess from looking at you from the outside just how many cogs and wheels you have turning and whirring within.

Taking your work hat on over Christmas is a foreign experience for you, for as is the case every year the Sun’s return to your work sector over the weekend has brought you to the start of one of your most important months of the year on the work front, one that will always fall over the closing days of one year and the first 3 weeks of the next. It doesn’t help that the Moon will remain in your career sector until Christmas Day and Mars won’t leave your work sector until Boxing Day, kicking Christmas week off to a very professionally motivated start. This may create some work/life balance issues on Christmas Eve and Christmas Day, making it hard to fully embrace the Christmas spirit, until Mars leaves on Boxing Day, even past experience won’t help you on this one.

If your reality is that you clock out at the end of one year, move into holiday mode and put all thoughts of work and professional matters aside until you clock back in, whether it’s between Christmas and New Year or later on, it won’t be this year. For the first time in 12 years you have Jupiter in your career sector over Christmas and while even the Moon’s return on Christmas Day shouldn’t disrupt things too much, being more about triggering your professional instincts and imagination, Boxing Day will see everything change. It’s on Boxing Day that Mars will return to your work sector, kicking off a busy and driven period on the work front that won’t run its course until 2 months later, to the day. From that point on keeping your work hat off will become a lot harder.

Whether you’re working through the holiday period or you’re on holiday you’re not going to escape keeping your professional hat on, especially towards the end of the week. While Neptune is spending his first Christmas in your work sector, in your lifetime, it isn’t his last and here now until 2026 all he’ll require over the holiday period is that you continue to dream and imagine, with no real requirement to roll your sleeves up and take more practical steps until early February. This isn’t enough to disrupt the holiday spirit but the Moon’s return to your career sector on Friday and the Full Moon this creates on the same day will. Waiting until after Christmas the last Full Moon of 2012 will provide the clues and hunches needed to line up for your 2013 professional year.

Because Uranus only left your work sector on Sunday the instincts, clues, hunches and Eureka moments this evoked over the weekend are still likely to be crystal clear and if anything things are making more sense now that he’s moved on. All of a sudden you’re able to see what you’re working with, where things stand, where to from here and how to prioritise, recognising what needs to be done now and what can wait. As not only the Moon’s last visit to your work sector for the year but also his first since Uranus turned direct, this has revealed that the tide really has turned, but also just how much time you actually have to pull things off. While your work focus will never completely go off the boil any focus this week needs to be directed more towards the income side of things.

While you’ll have the Moon in your work sector on Christmas Eve and Christmas Day, squeezing in one last visit for the year, you’ll find it relatively easy to keep your work hat off after that. A visit from the Moon is nothing compared to where things stood this time last year, with Jupiter only half way through his 12 month visit to your work sector and Mars just 7 weeks into his 8 month visit to your career sector. Fast forward a year and you have the enormous benefit of all that Jupiter and Mars invested, especially in the first half of 2012, without the pressure to keep your professional hat on over the holiday period. Instead the focus is now more on getting income benefits from the professional investments already made and listening to your hunches in the early days of the week.

Despite the fact that Jupiter is spending Christmas and the New Year in your work sector and the Moon will return on Christmas Day, squeezing in one last visit for the year, you will find it relatively easy to either take your work hat off over Christmas or at least find a balance between work and play. For with Jupiter in retrograde motion until late January, not leaving until June and things not even starting to come together until May there is little, if any urgency, something the Moon’s visit from Christmas Day until Friday will alert you to. What you do have a chance to do, especially if you’ve got time off, is to reflect back on the journey so far, not only on the work front but on the career front as well, with that 24/7 monkey on your back no longer there.

If you can’t take your professional hat off this week, at least work to find the right balance between work and play. Chances are you’ll never escape the internal ambitions and sense of professional determination that is taking shape, but nothing is so urgent that it has to be done or accomplished right now and you will actually benefit from a chance to step back. That is especially so in the earlier part of the week and over Christmas itself, but by as early as Friday you’ll be back in the game, in spirit at least. It’s on Friday that the Moon not only returns to your work sector but within hours will become a Full Moon, the last for 2012 and before lucky Jupiter returns next week. Pay attention, without censoring, anything this brings to the surface, evokes or pushes.

While you may find it hard to keep your professional hat off over Christmas, this year it’s for all the right reasons and even if it’s just your heart and mind working in the background, this is a week for defining your professional desires, expectations and game plan for 2013, as well as tying up loose ends on your current professional year. It was the Sun’s departure from your career sector over the weekend that should have brought all the planetary activity for the year to an end, but for the first time in 8 years both Venus and Mercury are staying behind to help you tie up loose ends. While Mercury will leave early next week Venus won’t leave until the weekend after, keeping Venus’ desires and Mercury’s intellectual savvy in play over the holiday period. Use this to your advantage. – Freepsychicnetwork

Kim Kardashian Wants to Hire a Stylist for Lamar