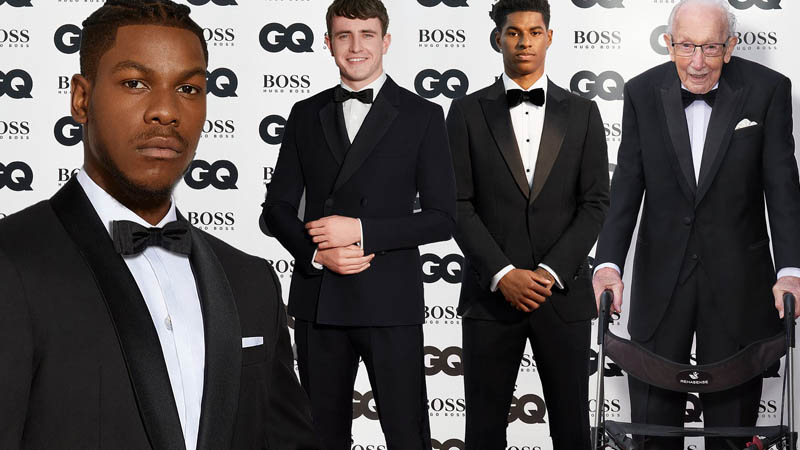 The GQ Men Of The Year Awards, held in association with Hugo Boss, have reached a milestone 23rd year.

A celebration of the biggest and boldest figures in culture, media, fashion and sport, as well as up-and-coming talents who are soon to be household names, the heroes of this year’s pandemic and the heavyweight luminaries marking a lifetime of achievement in their fields, it is the biggest night in British GQ’s calendar.

One of the most-talented young designers in Britain, Daniel W Fletcher served his “own take on the classic tux”, he told GQ. “It’s taken from my Spring/Summer 2021 collection and consists of my signature split-hem trousers and double-breasted jacket, all of which has been made in England.” Into it.

Not only was he going big in the hair department tonight (just look at those grown-out wet-look tresses), but Shawn Mendes has also done the near-inconceivable and convinced us that the chest-flashing, scoop-neck T-shirt of yesteryear might actually be worth trying out.

John Boyega traded in the dusty waistcoat, baggy slacks and handgun combo that became synonymous with his Star Wars character for a tailored-to-fit shawl-lapelled dinner suit, scooping the prize for the smartest ’fit on the night.

Sir Captain Tom Moore, as well as being the recipient of the Inspiration Of The Year award and GQ’s oldest ever cover star, is a dab hand at dressing for a red carpet in his Souster & Hicks dinner suit.

Whoever said black and navy don’t work well together clearly hadn’t seen Patrick Hutchinson in a Boss dinner suit. Take note and give your own go-to formalwear a navy mix-up.

GQ Men Of The Year host Jack Whitehall might be one of the funniest and most risqué men on TV, but when it comes to the red carpet it’s all serious business and he never puts a patent leather shoe out of line.

Visual artist Charlie Mackesy did away with the traditional black-tie rule book, wherein a white dress shirt is the order of the day, and opted for a teal shirt under his peak-lapelled dinner suit.

10 BIGGEST AQUARIUMS IN THE WORLD

I Love A Well Fitted Suit