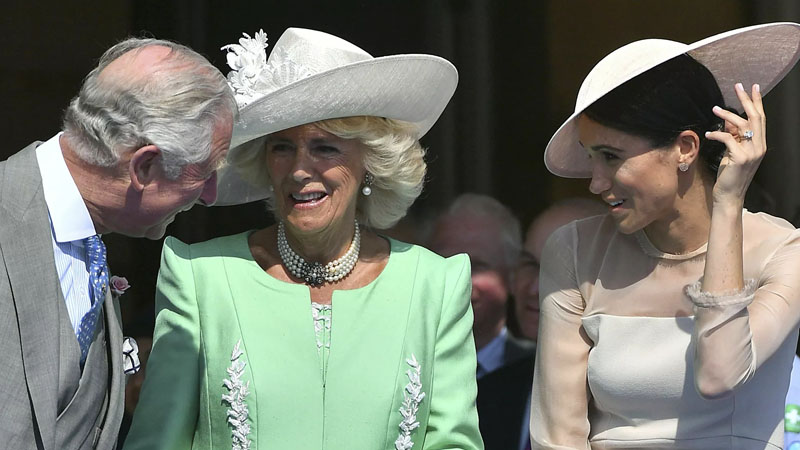 The woman who had an ongoing love affair with the Prince of Wales, resulting in one of the most famous divorces in history, threw some hypocritical shade at her daughter-in-law. Camilla, Duchess of Cornwall, reportedly called Meghan Markle, ‘that minx’, as well as ‘a self-seeking troublemaker’, a royal biographer says.

Tom Bower, who is a British author known for his unauthorized celebrity biographies, is currently working on a biography of Meghan Markle. He says that Camilla was reportedly ‘suspicious’ of Meghan’s intentions before the American actress married Prince Harry in 2018.

Bower told The Sun that the two never got along, saying, “[Camilla] found it hard to believe that Meghan would sacrifice her career and independence to serve silently as a team player devoted to the monarchy.”

He also adds that although she remained tight-lipped about her dislike towards Meghan, it was when the young couple was departing from the royal family, while also participating in explosive interviews on the same subject, that the Duchess of Sussex would refer to Markle as ‘that minx’ as well as ‘a self-seeking trouble-maker whose antics will always end in tears.’

The Duchess of Sussex (Meghan), who currently lives in a California mansion after saying adieu to her title as a ‘senior’ royal in January 2020, didn’t see eye-to-eye with the Duchess of Cornwall, either, says Tom Bower.

In an announcement marking the Queen’s Platinum Jubilee last week, Queen Elizabeth II said it was her sincerest wish that Camilla will be known as Queen Consort. Despite the fact that Camilla was vilified for years as a person who destroyed the marriage between her now-husband, Charles, and the late Princess Diana.

After a decade of being hounded by the press, the tide has officially turned in Camilla’s favor with this royal announcement, but only time will tell if Meghan will be shown that same level of forgiveness by senior royal members, too.

While Prince William announced his support in light of the Queen’s decision to make Camilla Queen Consort, all was silent from across the pond on Harry and Meghan’s end. Instead, four days after the announcement of his step-mother’s new title, Harry participated in the Tackle HIV podcast as a part of National HIV Testing Week in the UK.

His mother, Princess Diana, famously used her power as a royal to tackle HIV/AIDS stigma in the 1980s. Harry says he sees it as his duty to finish the work started by his mother, and if that happened, he “would feel a huge sense of pride that my mum and so many of her generation started something incredible.” He added, “I could never fill her shoes.”