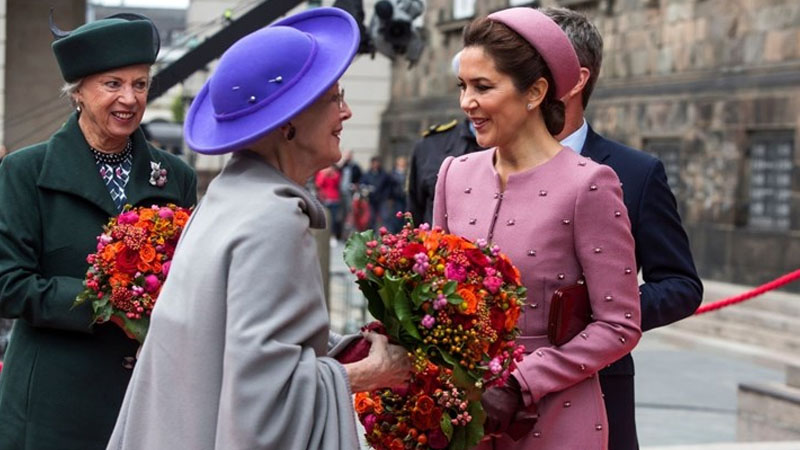 Celebrations for Crown Princess Mary’s upcoming 50th birthday are ramping up – and so, too, are plans to usher in the next chapter of her life as Queen of Denmark.

The royal and her husband Crown Prince Frederik appear to have moved one step closer towards ruling, following word from insiders that his mother Queen Margrethe is preparing to slowly step back from the palace and the crown.

“The Queen slowing down,” explains a palace insider, adding that the 81-year-old monarch has already begun making plans to relocate to Calyx Palace, her residence in Cahors, southern France.

“She’s able to do that because [Princess Mary] is totally capable of running things; she’s like a queen-in-waiting anyway.”

Margrethe is said to view her daughter-in-law, who turns 50 on February 5, as being at the prime point in her life to ascend as monarch.

Back in October 2019, Margrethe even gave Mary the green light to act on her behalf as regent. As a result of this arrangement, the Aussie ex-pat has now spent a rather considerable amount of time getting herself prepared and ready for the far bigger role that lies ahead.

“Margrethe definitely knows the country is left in good hands with Mary as Queen,” says our source. “For many years Margrethe has been ‘training’ Mary for this purpose.” But Mary isn’t the only one who has matured and grown into a state of readiness for the challenge to come.

A stumbling block in the past had been Frederik’s reluctance to settle down and take on the responsibility of the role – his playboy years a concern to his mother and late father Prince Henrik.

However, all that has changed since Mary came into his orbit and they became a family unit. It seems thanks to Mary’s guiding hand, Frederik, 53, is now ready to take his role seriously, and the Queen couldn’t be happier with the outcome.

“Margrethe has approved of Mary from the beginning,” agrees our source. “She has something very rare, and she is made to be queen. For Mary, this chance to shine under Margrethe’s guidance has also led her to look closely at just how she and Frederik will rule when the time comes.

They’re clearly forging their own path, making sure they’re in touch with their subjects in a way that aligns with Margrethe’s legacy – plus the modern twist that they’re happy to get out and about among the Danish people.

For example, during the recent Royal Run the pair split their time in towns across Denmark in order to meet and greet more of their subjects. They also managed to cover a lot of ground: Fred set off in Copenhagen with their three youngest children, and charmed residents of Odense and Sønderborg, while Mary flew to Aalborg and ran 5km alongside locals.

“She is the people’s princess and has almost a relaxed and natural way of being a European princess.” For Margrethe, there is also another, more unusual, reason to move away from the monarchy full-time. She’s about to be working on the Netflix movie Ehrengard, for which she’s been taken on as a set designer.

An accomplished painter and illustrator, this isn’t the first time the Queen has taken on such creative work in this type of field – she has designed costumes for the Royal Danish Ballet, plus a raft of locally made movies and TV over the years. She even illustrated an edition of The Lord of the Rings under the pseudonym Ingahild Grathmer back in 1977.

This new role will take up much of her time, however – and while sources in the palace point out it’s a labor of love, not a new career choice, there is no doubt she will have to outsource more of her duties and public engagements than ever.

“I do think it will take a lot of her time,” says our source, “but she truly trusts Mary and Frederik with all assignments.” The next step, then, could mean Mary and Frederik taking over duties while Margrethe finishes the movie work, then looks to spend more of her time in France.

While this will signal a changing of the guard, it won’t mean Margrethe totally abandoning Mary. Indeed, the Queen would still be close to family – France is where her second son Joaquin and his family have a home.

But what it would do is allow Mary and Frederik to take the throne forward into the modern era – something sources tell Royals Monthly is what the Danish people want.

“In the public, they think it´s time for Frederik and Mary to step in as king and queen,” says our insider, who adds that this has been the feeling in Denmark for some time.

Of course, it’s up to Margrethe to decide. If Margrethe stays in France, Mary will basically be queen, and Margrethe is just a short flight from Copenhagen if Mary needs her help.

Watch: Student unwilling to get out of bed carries mattress to the classroom in viral video

In the midst of split rumors, Tori Spelling shares family stockings and a holiday card without Dean McDermott