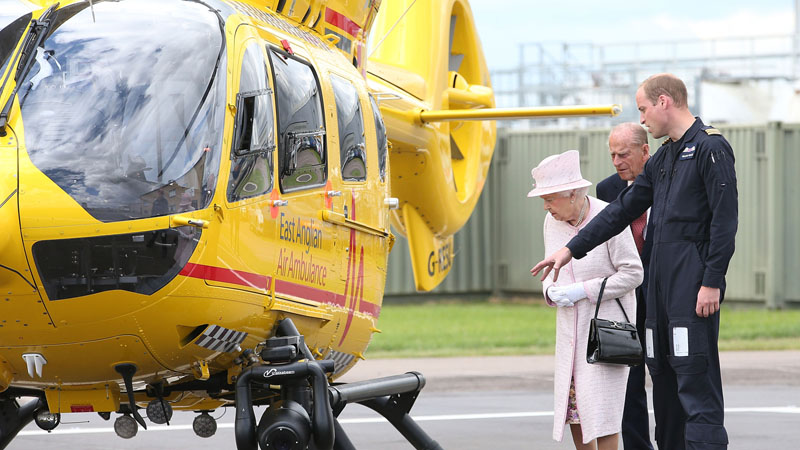 The situation keeps the 95-year-old awake at night, and she is “understandably very worried.” Because she fears disaster, Queen Elizabeth II has urged Prince William, her grandson and the second heir to the British throne, to cease flying helicopters with his family on board.

Prince William, who flew with his wife Kate Middleton and their three children Prince George, Princess Charlotte, and Prince Louis from July 2015 for two years as a full-time pilot with the East Anglian Air Ambulance, regularly flies between his London residence Kensington Palace and Norfolk country home Anmer Hall.

The Duke of Cambridge is the second in line of succession to the British monarchy, following his father Prince Charles, with his eldest son George set to succeed him. Traditional etiquette prohibited senior royals from traveling together as a precautionary step in the event of a disaster, but after the birth of William’s first child in 2013, the unofficial restrictions were loosened at William’s request, allowing him to fly with his successor on board.

The Queen, on the other hand, remains concerned about the situation and is “terrified” that a calamity could happen and jeopardize the line of succession. She has had “several conversations” with William where she requested him to “stop flying himself, particularly in bad weather” conditions, reports The Sun.

A source close to the monarch told the outlet, “Her Majesty has told close friends and courtiers that she would like William to stop flying himself, particularly in bad weather, as helicopters are not the safest form of transport.”

As per Ibtimes, the insider added that the matter keeps the 95-year-old awake at night and she is “understandably very worried” about it. They explained, “She knows William is a capable pilot but does not think it is worth the risk for all five of them to carry on flying together and can’t imagine what would happen. It would spark a constitutional crisis. The Queen has told William she is worried that, however good he is as a pilot, bad weather and accidents can strike at any time.”

According to the source, the queen is “delighted” with how William and his wife Kate Middleton have handled recent challenges, such as the departure of Prince Harry and Meghan Markle as working royals. She “knows the monarchy is safe in their hands” and thinks “the future is bright with them at the helm after Charles.”

She, on the other hand, can’t take the thought of what would happen “if something happened to him and the family.”