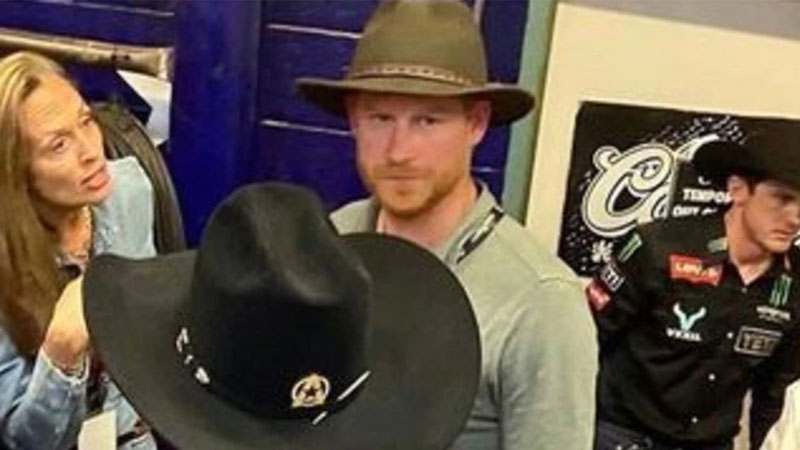 Harry at a rodeo in Texas. Picture: Omid Scobie/Twitter

Following his visit to a rodeo in Texas, Prince Harry was scolded by PETA, an animal rights group.

In response to an article detailing Harry’s Rodeo visit while in Texas, PETA issued a statement on Twitter. The statement read: “Prince Harry should feel embarrassed & contrite for attending a wretched rodeo. Royals are often mocked for being out of touch. Harry’s good on many issues, Meghan better on most. We hope to remind him that there’s no excuse for supporting animal abuse.”

Further comment was provided by the assistant manager of PETA’s media response team, Catie Cryar, who said in a statement: “It’s extremely disappointing to see that Prince Harry made the misjudgment to attend a rodeo, a crude, old amusement for bored cowboys who view animals as nothing more than things.”

At the Texas Rodeo, Prince Harry reprises his past role as a cowboy.

On March 5, Harry went to the Stockyards Championship Rodeo in Fort Worth, Texas, as a private person. While speaking to event organizers, he was photographed by a member of the public.

Harry’s visit coincides with what appears to be a cultural tour of the United States. In February, he attended Super Bowl LVI in Los Angeles with his cousin Princess Eugenie.

According to The Sun, his wife was not in attendance and many people at the event failed to recognize him as he watched a bull-riding show.

Former bull rider-turned-trainer Corey Melton also took to Twitter but has also since deleted his post, according to People.

“Living his best American life. Prince Harry was in Fort Worth, Texas this weekend and spent Saturday at the historic @cowtowncoliseum for the famous StockyardsRodeo. The duke was spotted by locals enjoying some good ol’ Southern hospitality and a VIP tour of the venue.”

Meghan Markle, who did not join her husband on the visit, has been an animal rights activist since before she married. In 2019, she was named patron of the Mayhew Trust, a charity dedicated to the welfare of cats and dogs in the United Kingdom.

This isn’t the first time Harry has been criticized by animal rights activists. Newspapers released a photograph of him posing close to the body of a water buffalo during his sabbatical year in South America in 2004.

Despite all the negative press around Harry’s visit to the rodeo, he is not the first member of the royal family to observe such an event. In 1963, Queen Elizabeth II and Prince Philip were spectators at a rodeo in Darwin, Australia. During their 2011 tour of Canada, Prince William and Kate Middleton attended a similar event in Calgary.

On May 4, 2016, Prince Harry was photographed at a polo match in Sentebale. Prince He is now being criticized by PETA over his decision to attend a rodeo in Texas on Saturday.