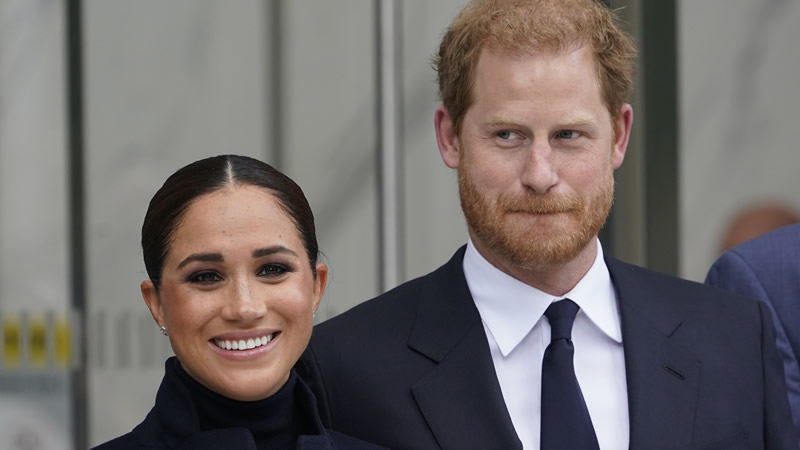 The Duke and Duchess “have continued to express our concerns” to the platform.

Prince Harry and Meghan Markle have publicly expressed their concerns about COVID-19 misinformation on Spotify.

“Since the inception of Archewell, we have worked to address the real-time global misinformation crisis. Hundreds of millions of people are affected by the serious harms of rampant mis- and disinformation every day,” reads a statement from an Archwell spokesperson.

“Last April, our co-founders began expressing concerns to our partners at Spotify about the all too real consequences of COVID-19 misinformation on its platform.

We have continued to express our concerns to Spotify to ensure changes to its platform are made to help address this public health crisis. We look to Spotify to meet this moment and are committed to continuing our work together as it does.”

Spotify first announced a partnership with the Sussexes in December 2020. According to a press release issued at the time, Harry and Meghan “will host and produce podcasts that build community through shared experience, narratives, and values.”

So far, the Sussexes have only released one 33-minute holiday episode and have yet to publicly announce additional Spotify projects. It’s unclear whether the delay in new content is due to platform misinformation or when the Sussexes will release additional podcasts.

Harry and Meghan are the latest to express concerns about Spotify. Neil Young, a rocker, removed his music from the platform earlier this week due to misinformation. “They can have Rogan or Young. “Not both,” Young wrote, referring specifically to podcaster Joe Rogan.

Rogan has a history of sharing false claims on his show, and on his December 31 podcast, he gave a platform to vaccine sceptic Dr. Robert Malone. Joni Mitchell and Nils Lofgren quickly followed Young’s example. Mitchell and Young, in particular, are both polio survivors.

In the midst of the controversy, podcaster Brené Brown stated that she will no longer release podcasts “until further notice.” She did not elaborate on the reason.

“I will not be releasing any podcasts until further notice. To our #UnlockingUs and #DaretoLead communities, I’m sorry and I’ll let you know if and when that changes,” she wrote on Twitter. “Stay awkward, brave, and kind.”

An open letter signed by 270 doctors, researchers, and experts in the health field was also sent to Spotify in mid-January expressing concern over Rogan’s podcast.

“By allowing the propagation of false and societally harmful assertions, Spotify is enabling its hosted media to damage public trust in scientific research and sow doubt in the credibility of data-driven guidance offered by medical professionals,” reads the letter.

“Throughout the COVID-19 pandemic, Joe Rogan has repeatedly spread misleading and false claims on his podcast, provoking distrust in science and medicine. He has discouraged vaccination in young people and children, incorrectly claimed that mRNA vaccines are “gene therapy,” promoted off-label use of ivermectin to treat COVID-19 (contrary to FDA warnings), and spread a number of unsubstantiated conspiracy theories.”

The letter concludes by asking that Spotify implement a policy regarding misinformation on the platform.

“This is not only a scientific or medical concern; it is a sociological issue of devastating proportions and Spotify is responsible for allowing this activity to thrive on its platform.

We, the undersigned doctors, nurses, scientists, and educators thus call on Spotify to immediately establish a clear and public policy to moderate misinformation on its platform.”

Read the letter in full here.

Meghan Markle thanked Simon Rex for rejecting bribe to lie about them dating: “I was broke as f**k”