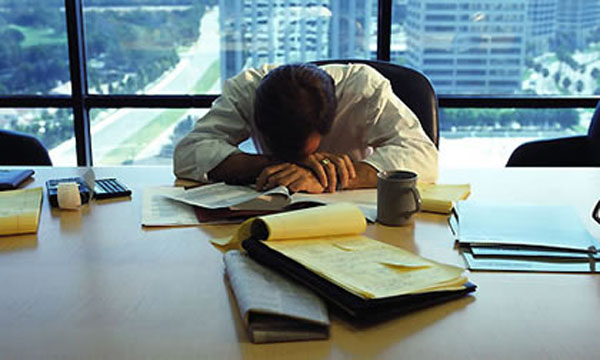 Three out of every four American workers describe their work as stressful. And the problem is not limited to these shores. In fact, occupational stress has been defined as a “global epidemic” by the United Nations’ International Labor Organization.

While the physical effects of this epidemic are often emphasized, the economic consequences also are alarming. Workplace stress costs U.S. employers an estimated $200 billion per year in absen teeism, lower productivity, staff turnover, workers’ compensation, medical insur ance and other stress-related expenses. Considering this, stress management may be business’s most important challenge of the 21st century.

Of course, stress is a factor in every one’s life, particularly during major events such as marriage, divorce or buying a home. But according to the Holmes-Rahe Life Events Scale, which rates the levels of stress caused by such events, many of the most stressful events are related to the workplace: firings, business readjustments, changes in financial status, altered responsibilities, a switch to a different line of work, trouble with the boss, variations in work hours or conditions, retirement and vacations.

Surprisingly, stress is not always a bad thing. It can stimulate creativity and productivity. According to Robert Ostermann, professor of psychology at FDU’s Teaneck-Hackensack Campus, “No one reaches peak performance without being stressed, whether an athlete, an office worker or a manager.” The natural pattern of human behavior is to experience a stress-causing event or situation, react to it with increased tension and then return to a normal, relaxed state. The problem occurs when stress is so overwhelming or constant that this pattern is broken.

TRACING THE ROOTS OF STRESS

Ostermann has found that the level of occupational stress is determined by three dimensions — life situations, work and self — and that the balance between the causes of stress and available systems of support must be considered. An inter nationally applicable measure of occupa tional stress developed by Ostermann, named SWS for situations, work and self, encompasses all three dimensions because, Ostermann says, “surveys that only look at work factors are not giving the full picture.” Sources of stress vary tremendously. For factory workers, stress often is related directly to the work situation, such as dealing with dangerous heavy equipment or working in an uncomfortable environment. In contrast, office workers are more likely to experience stress related to inter-personal relationships on the job. “People pressures” such as unclear supervision, tension among team members and fear or aversion of conflict can cause stress.

“For many people the core of their social life is the people with whom they work,” explains Ostermann. “But work is not a social situation, so you begin to get some things that are antagonistic to good relationships, such as rumors and power plays among executives who are competing for the next promotion.” Occupational stress is not related only to what goes on at work. Conflicts between the demands of the workplace and of home life are increasingly common. According to a survey completed for the U.S. Department of Labor, 10 percent of people who are married or living with children under 18 experience severe work-family conflict, and an additional 25 percent report moderate levels of conflict.

Internationally, Ostermann has observed, “There is less stress in developing countries than in developed countries.” This may be due in part to increased consumerism and the growing influence of advertisers who “try to convince the consuming public that a want is a need.” The sense of values also is different in many of the developing countries. In developed nations, there often is an emphasis on what is possessed or how much money is earned. “In many developing countries,” Ostermann states, “the value of family and nation is much stronger than it is here in the U.S.” This strong value system provides support for people in these cultures and may enable them to deal with greater amounts of stress. Some cultures — like those in Taiwan, Hong Kong and Singapore — are emulating the American model and, therefore, Ostermann has found, are growing more stressed.

Joel Harmon, associate professor of management and chair of the management, marketing, information systems and  sciences department on the Florham-Madison Campus, says, “The greatest reported cause of stress is workload.  Employees work more today than they did 25 years ago — the equivalent of a 13th month every year. Staff are getting downsized but the work remains, so workloads are getting upsized.”

Changes in office procedures are happening more rapidly than at any other time in history. “Fifty years ago, the nature of someone’s job did not change during their entire tenure at that job,” Ostermann says. “Now, everything is different.” And, in the current “information age” things move at a faster pace than ever before with faxes and instant e-mail messages. Some professions are especially prone to stress resulting from changing technology. Take airline pilots, for example: “They are flying more complicated planes, carrying more people under morepressing time demands and with much more airport traffic than ever before,” Ostermann observes.

Technology in automation has en abled employers to eliminate many jobs. Not only does this result in a fear of being replaced by a machine, but those who keep their jobs must undergo retraining and tend to have a higher level of respon sibility, and thus greater stress, thrust up on them. “Other organizational changes,” Harmon adds, “especially increased use of part-timers, management changes, increased diversity and pay cuts or freezes,” lead to increased levels of job  insecurity. “Now only about half of managers and employees rate security as good or very good, down from 75 to 80 percent  in the 1980s.”

A particularly alarming cause of  stress, and part of a vicious circle as it also  is a symptom of stress, is aggression or  violence in the workplace. It is estimated by the U.S. Justice Department that each year more than a million people are the victims of violence at work, accounting for about 15 percent of all violent crime in the country. This causes a half million workers to miss time on the job at the rate of 1,751,000 work days per year, costing $55 million in lost wages.

Everyone has heard cases of disgruntled employees “going postal,” an expression derived from a 1986 incident at an Edmond, Okla., post office in which 14 postal workers were shot to death by a co-worker before he turned a gun on himself. And, people worldwide witnessed the stress that teachers and students at Columbine High School in Littleton, Colo., and their families endured when two gun-toting students massacred 12 of their peers and a faculty member and laced the school property with explosives. (For more on violence in schools, see “Those Who Can, Teach,” 1998 spring/summer.) More common than such extreme cases is violence that occurs in retail or service industries: attacks on taxicab drivers, health care  employees, convenience store clerks, workers in government offices and police officers, among others.

According to Harmon, aggressive behavior in the workplace ranges from the rare “serious instances of physical assault” to the more widespread “‘passive’ forms of aggression, such as withholding resources, not responding to phone calls and memos and being late to meetings.” Though these passive-aggressive behaviors seem benign, Harmon notes that “when constantly repeated, they can result in great psychological harm and loss of personal and organizational productivity.”

The physical effects of excessive stress have long been recognized — from heart attacks and strokes to ulcers and other gastrointestinal disorders. Continual stress also takes a toll on the body’s immune system, causing frequent colds and other illnesses. Psychologically, stress can lead to depression, anxiety and even panic attacks. Specifically, the stress produced by aggression in the workplace has “been associated with physical and psychological distress, resulting in decreased productivity, commitment and loyalty,” says Harmon. Also, victims of or witnesses to violence in the workplace may suffer from a range of trauma-related illness including post-traumatic stress disorder.

Sixty percent of lost workdays each year can be attributed to stress. In addition, an estimated 75 to 90 percent of visits to health care providers are due to stress-related conditions, costing employers in increased health care costs. A list of physical and psychological warning signs of stress exhaustion appears on this page. Stress also can have a direct effect on the way people handle their jobs. Employees under stress may make more mistakes, have trouble concentrating, become disorganized, become angry or just stop caring about their work. The Wall Street Journal reported that one third of people surveyed considered quitting their jobs because of stress and 14 percent actually did.

Many people look for help to resolve their problems with stress, and employers are responding. “We look for support systems, things that will offset the stress,” comments Ostermann. Options include flexible work weeks, telecommuting opportunities and encouraging personnel to live balanced lives. Harmon cites the Business Work-Life Study conducted by the Families and Work Institute, which “suggests that organizations adopt work-family programs, inform employees that help is available and hold managers accountable for sensitivity to their employees’ work-family needs.”

On the physical side, some organizations provide health clubs where employees can work out and keep fit and cafeterias where workers can choose from a healthy range of meals. Most corporations make counseling readily available, if not on site then through the health care benefits they provide their employees. Handling stress, however, is a very individual matter. Alice Mills, co-director of counseling services in the Teaneck-Hackensack Campus Wellness Center, suggests several ways individuals can deal with stress. “The first step is to analyze the situation to determine what is causing the stress and what techniques might best suit the individual,” she says. Mills notes that there are many relaxation skills including the use of music, meditation, diaphragmatic breathing exercises, aerobic exercise, muscle relaxation and imagery. Many of these techniques can be learned through books and video- and audiotapes such as those that the Wellness Center makes available to students, faculty and staff through its stress lab.

Some people bring stress with them to the workplace through their disposition. “By telling yourself you’re going to fail or by expecting negative reactions from other people, you may create your own stress,” Mills says. Cognitive techniques help people monitor their thinking, identify “unrealistic” negative thoughts and replace those thoughts with more positive coping statements. These techniques, used by psychiatrists and other professional counselors, help reduce negative moods such as anxiety and depression. They also are helpful when teaching individuals to manage their own angry reactions to people and situations.

Another important way to combat stress is to sharpen one’s communication skills. “You need to learn how to speak about your own needs and wants and how to give positive and negative feedback to others,” Mills explains. This is what many know as assertiveness. “Some techniques can be implemented on the spot to try to restore the natural rhythm of stress and relaxation,” Mills says. Take a break, talk with colleagues, go to the bathroom or water cooler or do breathing exercises to restore balance. “Take stock of your stress-creating habits and take action to change them,” she says. And, perhaps most importantly, “Take care of yourself.” -fdu.edu

Moto G Ferrari Edition to arrive in Mexico: Available in 16GB with Kevlar back panel

Tips To Handle Relationships at Workplace

How to Deal with Rude Co-Workers