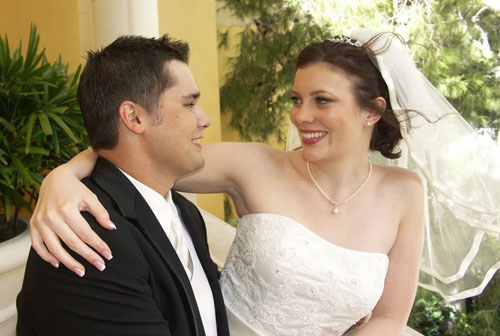 Things No One Ever Tells You About Marriage

One of my favorite scenes is at the beauty shop the morning of the wedding when each lady passes on her “advice” to Shelby. Truvy laments that the last time her husband was romantic was in 1972. Clairee assures Shelby she’ll be fine because “Louisiana lawyers do well whether they want to or not.”

And then the amusing Ouiser declares that men “are the most horrible creatures” who will “ruin your life.” Now that I’ve been married eight years, I’ve realized there are several things no one ever tells you about marriage. Not that I wouldn’t have married Rich had I known about them, but it might have been easier to walk through the marriage minefield had I identified them in advance.

My T-shirt costume works most of the time. But when I see Rich looking a bit too longingly at the Victoria’s Secret catalog in the mail pile, I know it’s time to whip out one of my satin-y numbers for a little romance. I don’t know if it’s the effort or the effect or both, but showing some skin seems to transform me into Heidi Klum in his eyes. The (admittedly not model-like) body that was ho-hum in a T-shirt goes va-va-voom in a red teddy.

2. Some of your most satisfying “conversations” won’t involve talking.

Before I was married I took note of couples who ate in silence at restaurants, feeling sorry for them, and hoping I’d never have such a “cold” marriage. I was wrong. In fact, the calm that comes from enjoying peaceful time with each other, whether that’s at a restaurant or sitting on the couch gazing at a roaring fireplace, is unsurpassed. The stillness you can capture together as you shut out the din of the world brings you closer and reinvigorates you to face life’s stresses as a team.

3. The best way to get your husband to read something is to leave it in the bathroom.

A friend’s young daughter asked me, “Miss Christy, why does my dad spend so much time in the bathroom when he ‘goes’?” I shook my head bemusedly and told her, “Because he’s a man, honey.” While I’m not a doctor and haven’t studied the human excretory system, I’m pretty sure our bodies all “go” at about the same pace. But for whatever reason—it could be to escape our honey-do lists for a while—men like to camp out on the toilet.

So rather than see this time go to waste (sorry, I couldn’t help myself!), I ever so subtly began to position material I wanted my honey to read within arm’s reach of the bowl. A vacation pamphlet? Done. Catalog with paint ideas for our bedroom? Check. And the best ever placement: a daily devotional magazine. (Hey, didn’t the Lord tell us to go into a room, close the door, and pray to the Father? And I do so appreciate when that particular door is closed!)

4. Your marriage will need to be reinvented.

I can hear you now: “But he’s my soul mate. Why would I need to change that?” The answer to that is sticky—as in glazed doughnuts. Who doesn’t like an occasional doughnut, right? Just the aroma makes your mouth water, and then a bite of the sweet pastry slides down your throat in a wave of goodness. But what if that’s all you ate? For the first few days, it might seem really great—all the doughnuts you can eat (calorie-free, of course) any time you want. But a week or so into this diet, and you’d be wondering where the meat, vegetables, and fruits are.

When I was single I remember all my married friends saying how “hard” marriage is. I was puzzled—What’s so difficult about making dinner and watching TV? I thought. Well, we all know marriage is much more than the good times. But I don’t buy the “hard” argument. Which is easier: telling your husband you love him or crying about how he doesn’t appreciate you? Is it trickier to acquiesce or to create a fight over who is right? Will you feel better at the end of the day if you nag him about his socks on the living room floor or is it easier just to pick them up and forget about it? A friend who is a widower says he doesn’t understand why people make marriage so complex.

And if you knew him, you’d appreciate his wonder even more—his wife, who died a few years ago, suffered from a mental illness that made her combative for most of their marriage. Instead of giving up or trying to change her, he rolled with the punches (sometimes literally), relishing the few good times and overlooking the bad. He often advises me and his other married pals that it’s so much easier to do the right, loving thing than to deal with the conflict that results from selfishness. -todayschristianwoman

Get Your Girl Some Naughty WomenWear