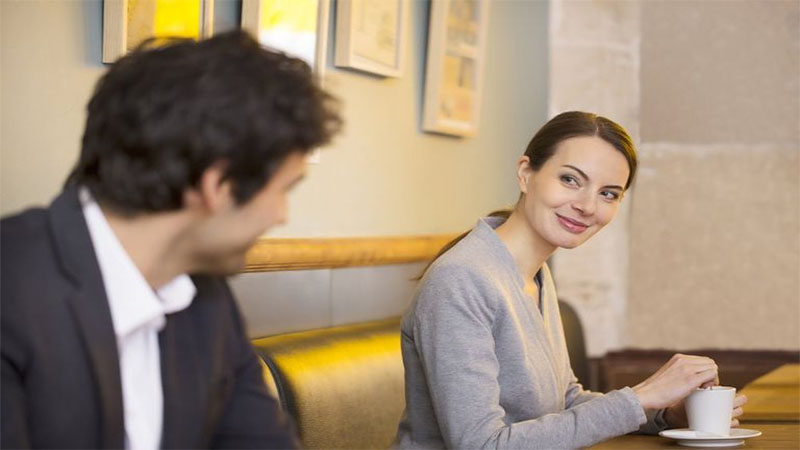 Long before you say hello, you can silently seduce the woman across the bar.  It’s all about tweaking your body language, says Joel Wade, Ph.D., a psychology professor at Bucknell University. Check out the most effective nonverbal pickup cues.

Sit at a table with one arm draped over a nearby chair, or lean at the bar with your arms spread apart.  Both moves convey control of personal and physical space, Wade’s research finds. Women interpret this as a sign of dominance—a key trait for boosting your attractiveness, he says.

Men who don’t cross their arms are seen as more attractive, active, and persuasive, finds a study in Evolution and Human Behavior. Avoid poses that will constrict or close off your body, Wade says. Instead, sit or stand with your legs apart and your elbows away from your sides.

3. Dial Down Your Smile

Women regard too much smiling as a sign of femininity and timidity—both of which are turn-offs, according to a study in Emotion.  That doesn’t mean you should keep a stone face. After all, women are attracted to men who seem fun and approachable, Wade says. Just lose the permanent grin, the research suggests.

Grab your buddy and slap his back. Touching your male friends (with limits, of course) signals social status and dominance, which women dig, says research in Social Behavior and Personality.

Every couple minutes, rub your jaw and scratch your chin. This will draw attention to your most masculine features, says Wade.  The lower portion of your face is directly linked with your testosterone levels. Even if you don’t have a chiseled jaw, directing her attention down there makes you seem more attractive, he says.

Subtly mimic the way she gestures or holds her drink. “Mirroring a person’s behavior can make you more appealing to that person,” says Wade.

But don’t go overboard. “Mimic too much or too closely, and it can be off-putting,” he says.

Men who frequently glance around are more likely to make eye contact with women—and women respond better to guys with whom they’ve already exchanged glances, according to Wade’s research. So every few minutes, sweep your eyes across the room, making sure to look briefly at her when you do it. You want to catch her eye, but you don’t want it to be too intense,” says Wade. Staring could make you come off as super aggressive—or even deranged, he says.

8. Now Watch For Her Signals

If you’ve played all your cards right, she’ll send you her own signals that say she’s interested.   “Look for her to flip her hair or tuck it behind her ears while looking at you,” says Wade. Even better: Watch to see if she raises her eyebrows when you first make eye contact.  “This is a pretty good indicator that she’s at least open to learning more about you.”

5 Fitness Pillars to Stay in Shape for Your Entire Life