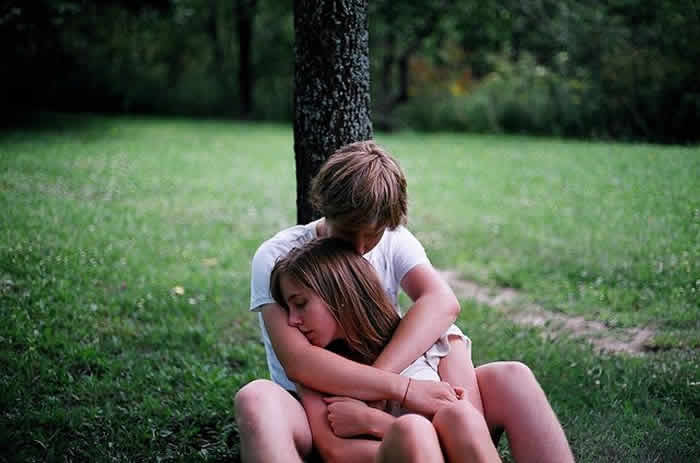 It’s the oldest tale in romance — boy likes girl, boy teases girl on the playground, boy and girl live happily ever after. Yes, it starts early and often continues on from there. The signs that he likes you aren’t always obvious — or even particularly conducive to love. Sometimes he sends clear signals he may text you, call you, or send a dozen roses for no reason at all. Or, shockingly enough, he may actually tell you he likes you outright.

How brave! When this happens, it’s easy to feel secure in your relationship. He likes you, you like him, the world is full of rainbows and kittens. But, more often, the signs a guy likes you are vague and confusing. Sometimes, you practically need a decoder ring to figure out what’s going on. Consider this right here your own personal man-behavior decoder ring!

Here are five common, yet subtle, ways a man hints that he likes you (without ever actually saying it):

1. He gets very serious or quiet.

One of the signs a guy likes you is his level of seriousness. He may seem quiet and pensive and take your conversations with the gravity of a Master’s dissertation. He may even come off a little boring, asking you to tell him about your job as a CPA, for instance. It can seem a little bit like he’s conducting an interview at times, but he’s merely playing it safe. During this phase of the relationship, he’s in his adult ego state, which basically means he’s extremely careful not to mess things up. He wants you to drive the conversation, rather than risk him driving you away.

2. He’s formulaic in his approach.

Another sign a man likes you involves his approach. If he is formulaic, almost surgical, in the way he says and does things — waiting exactly three days to call you, for example it’s often because he fears the errors that might come with spontaneity. He’s uncomfortable with the thought of losing you and, thus, he acts subdued in his approach. Another way this might manifest is through hyper-masculinity meaning he might act like an oddly macho, macho man. Perhaps he really is a raging ball of testosterone, but he may also just be putting on a show. Men often go into masculine mode (the safe, traditional gender role) when they aren’t sure what else to do. The last thing he wants is to come off as needy or desperate, so he flexes his muscles a little while staring in the proverbial mirror.

3. He accidentally insults you.

Believe it or not, one of the signs he really likes you is when he accidently insults you. It’s his very awkward attempt to create an emotional spark. He may try to tease you or joke with you or flirt with you (and, frankly, he might be bad at it). He might seem arrogant and brash at first, but give him a chance. He’s only trying to connect with you by challenging you. It’s a thing guys do with each other to show affection. They banter. Some men are still the awkward boys from grade school, no matter how old they grow. He’s trying to be playful, not realizing he’s not coming off well.

4. He acts cocky and brags.

Ironically, one of the biggest signs that he loves is coming across as him loving himself A LOT. Cockiness and bragging aren’t exactly things women look for. Tall, dark, and boastful? Nope! But oftentimes men brag in an attempt to build value. In short, they want to impress you. He’s not trying to compete with you or one up you, at least not usually. He simply wants you to see what he can offer. He’s trying to sell himself so that you’ll give him the time of day … and your phone number.

Among the final signs that he loves you is one of the most confusing: He doesn’t initiate physical contact. This may turn awkward if you’re giving him the green light “So, here are my breasts.” You might conclude he’s not attracted to you, or that you’re not his type. You might even conclude that he’s a eunuch. Despite popular belief, men don’t always jump at the chance to have sex. If he’s slow to respond to your advances, it might simply mean he’s afraid of moving too quickly and ruining the relationship. Even if you’re giving him the green-light, he may still fear rejection or ruining the chance at a real connection. That can be enough to make him keep his hands to himself just a little while longer.

You Should Never Reheat These 7 Food Items!

Advice for Dealing with New Relationships