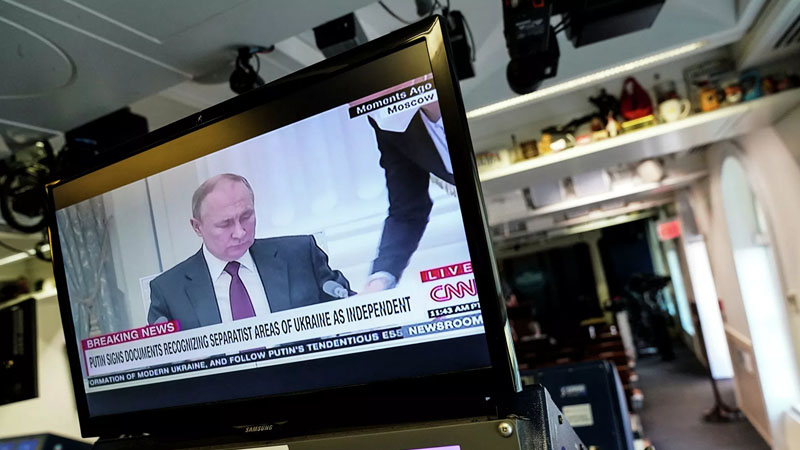 After consulting with senior security officials, ministers, and other members of the government, Russian President Vladimir Putin has announced that Russia officially recognizes the independence of the People’s Republics of Donetsk and Lugansk. Putin said the move should have occurred “long ago”, and called on Ukraine to cease regional hostilities.

Russia’s recognition of the Donbas Republics’ independence sent a shockwave around the world, triggering reactions from leaders of many countries and other high-ranking government officials.

Not long after the announcement, Josep Borrell Fontelles, the high representative of the European Union for Foreign Affairs and Security Policy, announced that the EU and its international partners “will react with unity, firmness, and determination in solidarity with Ukraine”.

NATO Secretary General Jens Stoltenberg issued a statement arguing that the recognition of the Donetsk People’s Republic and Lugansk People’s Republic “undermines Ukraine’s sovereignty and territorial integrity, erodes efforts towards a resolution of the conflict, and violates the Minsk agreements, to which Russia is a party”.

The NATO release added that Moscow is fuelling the conflict in eastern Ukraine via financial and military support to separatists.

“It is also trying to stage a pretext to invade Ukraine once again”, reads the NATO release. Ukrainian President Volodymyr Zelensky has met with the National Security and Defence Council of Ukraine and discussed the ongoing “situation” in separate calls with US President Joe Biden and UK Prime Minister Boris Johnson.

Lt. Gen. Valery Zaluzhny, commander-in-chief of the Ukrainian Armed Forces, also conducted a phone call with US Chairman of the Joint Chiefs of Staff Gen. Mark Milley, the highest-ranking and most senior military officer in the US Armed Forces.

“The military leaders continued to exchange perspectives and assessments of the security environment in Eastern Europe”, according to a readout from the call. “The chairman once again reaffirmed unwavering support for Ukraine’s sovereignty and territorial integrity”.

The UK announced that it would coordinate a response with its allies and stated it would “not allow Russia’s violation of its international commitments to go unpunished”.

“President Putin’s recognition of ‘Donetsk People’s Republic’ and ‘Lugansk People’s Republic’ as independent states shows flagrant disregard for Russia’s commitments under the Minsk agreements”, wrote UK Foreign Secretary Liz Truss. “This step represents a further attack on Ukraine’s sovereignty and territorial integrity, signals an end to the Minsk process and is a violation of the UN Charter”.

Truss additionally asserted that the move shows that Russia is choosing “a path of confrontation”.

White House press secretary Jen Psaki noted that the US had “anticipated” the move, and as a result, US President Joe Biden was preparing to sign an executive order that would implement additional sanctions on Russia.

The EO will “prohibit new investment, trade, and financing by US persons to, from, or in the so-called DNR and LNR regions of Ukraine”.

It will also provide the authority to impose sanctions on those believed to operate from within those regions. The sanctions will be just the beginning of Washington’s new economic pressure on Russia, the White House noted.US Secretary of State Antony Blinkenalso promised a “swift and firm response”.

French President Emmanuel Macron moved to call an emergency meeting of the United Nations Security Council, along with the “adoption of targeted European sanctions”, according to a translated release. Polish Prime Minister Mateusz Morawiecki, who recently expressed that Poland was prepared to provide more defensive weapons to Ukraine, also noted that his country intends to impose “immediate sanctions” on Russia, according to a translated statement.

“This is the only language Putin can understand”, Morawiecki asserted.

In the face of international opposition to Putin’s move, Draginja Vlk, a member of the Belgrade City Parliament, expressed to Sputnik that she believes the move “will help prevent further escalation of conflict and save the people from the danger they are in”, referring to the tens of thousands of refugees currently pouring into Russia.

“No one in the 21st century, almost 77 years after World War II, should feel insecure economically or even be at life risk, and no one should tolerate US and NATO claims”, Vlk said.

Brenda Edwards of Loose Women pays tribute to her son Jamal Edwards, who died at the age of 31